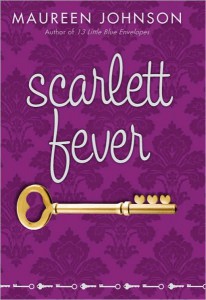 Earlier this year I devoured the first book in this series, “Suite Scarlett,” after having been sent this book to read. Sequels can make me twitchy, especially if I loved the first book, because I’m hopeful lightening will strike twice but fearful that I’ll end up only getting fried for my trouble. With “Scarlett Fever” you’ve done what I hope for in capturing the charm I want while still moving the characters forward.

Scarlett Martin and her family are still running their slightly-frayed-around-the-edges boutique hotel in NYC. It’s autumn now and Scarlett is back in school though still working as a dogsbody for new acting agent Amy Amberson. Amy’s first client is Scarlett’s older brother Spencer and the second person Amy has her eye on is Chelsea Biggs – star of a crappy Broadway musical and brother of Scarlett’s new schoolmate Max, who has his own set of problems. Scarlett’s younger sister Marlene is up to her old manipulative tricks while other sister Lola appears to be reconciling with her wealthy, though little liked by the Martins, boyfriend Chip. And then there’s Eric, Scarlett’s used-to-be-sorta boyfriend who keeps popping up and disturbing Scarlett’s equilibrium. Who knew your sophomore year could be this unnerving?

Though new readers could probably start with “Fever” since you do an excellent job of recapping the events of that book without totally boring me, I would hope they’d do themselves the favor of discovering the Martin clan, Amy, Eric and Chip from the beginning. I think it will make slotting the new characters into the narrative much easier and allow for focusing on them. Chelsea the girl who’s wanted to be a star from childhood and studied how for almost her whole life. Her show business mother who is almost, if not more, determined to see that happen. And Max who makes it his business to be anti almost everything – just because. Neurotic Dog Murray and obnoxious Doorman Murray add their own New York charm to the story.

I like that the returning characters haven’t changed personalities since the last book. Scarlett and Spencer still work together on Spencer’s casting calls. Marlene still scares her siblings and Lola still tries to get them to all get along. The Martins may disagree among themselves but woe to any outsiders who tangle with them. The selfless act which Spencer does for his sister during a fancy party speaks volumes. Meanwhile Scarlett sticks up for Spencer as his newfound acting fame is shamelessly pumped up by Amy. And the family rallies behind Lola even after she commits what some of them consider to be a cardinal sin, then learns from Lola how outsiders might see – and envy – the tight knit Martin clan.

“Scarlett Fever” doesn’t merely rehash the success of the first book. It takes these characters in new directions and stretches them while still having them remain true to how you initially developed them. Scarlett is still a teenager confused by love and astounded at some of the tricks Amy will pull. She still loves her family though she doesn’t always understand them or like what they do. School is still school and Scarlett has to soldier through it as all of us did. And I like this book just as much as I did “Suite Scarlett.” The only difference when I finished it is that instead of having the next book already waiting for me to dive into, I’m gonna have to wait! Arrrrgh.