March is “Series Catch-Up” month in SuperWendy’s TBR challenge, and I chose the second book in the Corcoran Team series released by Harlequin Intrigue. I enjoyed the first installment, Fearless, which introduced the team members and focused on Davis Weeks and Lara Bart (brief review here). Ruthless picks up a few months later and features Davis’s brother Paxton and coffee shop owner Kelsey Moore. Paxton is recovering from the injuries he sustained in Fearless and keeping an eye on Kelsey, whose brother Sean has disappeared with valuable corporate secrets. 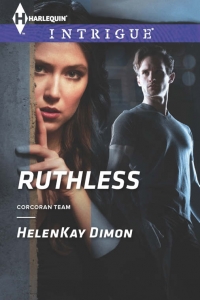 The book opens with what I’ve come to consider a Dimon trademark: Kelsey is going about a normal day at the shop when two men in suits come in and they aren’t there for the pastries. She senses something is wrong and heads for the back door but isn’t able to shake them, and when Paxton tries to whisk her away to safety she fights him too, unsure that there are any good guys in this scenario.

Of course we know there are, and Paxton’s ensuing actions lead her to trust him, so she soon makes the acquaintance of two more of the core members of the Corcoran Team, techie Joel and the leader, Connor. The author is very good at giving us bits of information about supporting characters and weaving them into the main storyline without making them obvious sequel bait or info-dumping. If you haven’t read the first installment you’ll miss some of Paxton’s family history, but that information is briefly reprised here and then further developed. Connor’s wife is still mysteriously away (this should make for a good estranged lovers installment), and I am becoming very fond of Joel. One of Joel’s jobs is to monitor what team members are doing in the field, and this leads to amusing moments when Kelsey and Paxton’s mutual attraction heats up:

He lifted their joined hands and kissed the back of hers. “Can’t lie, I’ve wanted to throw you on that counter since that first morning you handed me a coffee of the day, but that was the wrong time and so is this.”

“Who are we kidding?” Her shoulders sagged. “It’s adrenaline. We’ll get over it.”

She definitely didn’t understand some very important facts about him. But she would. “Yeah, I’m not likely to let that happen.”

“You kiss all the people you protect?”

How she missed the signs and threw herself into the category of the easily forgotten or just like every other woman was a mystery to him. Time for a wake-up call. “You’ll be the first, but later, when I can really concentrate on the task.”

A forced cough crackled over the comm. “Do I get to listen in then, too?”

Pax wanted to curse, but he had no one to blame but himself for this one. “Joel, I swear I—”

“Okay, kids. Let’s finish this job before we start celebrating.”

Kelsey held a hand over her mouth. This time her wide-eyed stare had nothing to do with fear. “For a second I forgot he was there.”

Joel chuckled directly into their ears. “I love hearing that. You’d be amazed what I pick up from back here.”

But this is Paxton and Kelsey’s book, and they make a great couple. Kelsey inherited the coffee shop from her aunt but she’s worked tirelessly to make it a success and along with the apartment upstairs, they are the only things that belong entirely to her and help her feel financially and emotionally secure. Kelsey’s father is a notorious fraudster and ex-con, and she has had an uncertain relationship with Sean, who is three years younger than her and the son of her father’s second wife (who never had much use for Kelsey). Kelsey has kept away from her father as much as possible, but Sean’s disappearance draws her back into her father’s orbit, especially after she opens the box that Sean sent her unexpectedly, right before he disappeared. The box turns out to be of interest to Sean’s former employers as well as to the government, which makes it (and Sean) of interest to the Corcoran Team.

Paxton has been falling for Kelsey in the days he’s been visiting the coffee shop to watch over her, and his instincts are to protect and shield her from whatever is going on, while the rest of the team tries to piece together the information they need to find Sean. But Kelsey is having none of their information-free solicitousness, and she demands to know the whole story as a condition of her cooperation. Paxton’s injuries don’t stop him from carrying out your standard Romantic Suspense Protector Dude actions, but Kelsey keeps up with him and saves him right back at a couple of key moments.

Kelsey’s and Paxton’s family issues provide somewhat parallel backstories, although Kelsey’s are more developed and drive the plot line. I enjoyed the additional reveals in the Weeks brothers’ family history, and I’m hoping they continue over the course of the series. We get to see some of the action from Sean’s point of view and he came across to me as basically a kid who hadn’t sorted out his life yet; he was both sympathetic and frustrating. Dimon does a good job of showing how siblings can still turn to each other in a crisis even when events have driven them apart, and the father is genuinely frightening. The mystery plot is tightly constructed and works well within the category constraints, although as usual the ending is more rushed than I would have liked.

I gravitate toward the Intrigues because the mystery is front and center but there is always supposed to be a credible romance as well, and I think Dimon executes this form as well as anyone writing in the line. She manages to write a compelling suspense plot with a romantic relationship that grows organically as the mystery unfolds. Sometimes this is achieved by giving the couple a previous history, while at other times they are drawn together by a shared history or interests (as I think Paxton and Kelsey are here). Either way, the physical attraction doesn’t spring out of nowhere or have nothing else to buttress it, and so despite the short word count I finished the book feeling confident in what the future holds for the relationship. Grade: B+