Carina Press’s holiday anthologies are fast becoming autobuys for me. I was sorry there was no m/m anthology this year, but this entry in another favorite subgenre of mine, contemporary romance, made up for it. As is often the case, especially with two out of three new-to-me authors, I had varying reactions to the different stories. Two are small-town romances featuring installments of family series, while the other is set in a major city and uses it to very good effect. 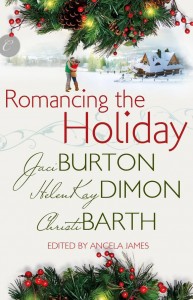 The first story is HelenKay Dimon’s We’ll Be Home for Christmas. Spencer Thomas is the never-married, never-planning-to-marry brother in the trio that runs Thomas Nursery. But when he discovers that his partner in a seriously hot, memorable three-night stand, Lila Payne, is in Holliday and planning to stay, his ironclad rule is in danger. Lila can’t believe that the gorgeous dude who lied to her is an upstanding, generous citizen of her new home town, and her ex-husband hasn’t offered her much reason to give the male sex the benefit of the doubt. But Spencer really IS a decent guy, and both he and Lila have to start reevaluating their respective assumptions.

I liked the previous story in this trilogy so much that I was a little apprehensive when I started this one. But I was in good hands. Spencer was kind of a jerk in Lean on Me, but here his character is deepened and enriched without turning him into a whole different person. Lila made a good match for him, too. She’s down to earth and a bit gunshy from her bad marriage, but she doesn’t immediately endow Spencer with all the bad traits of her husband. I only realized when I was writing up this review that in the second and third stories, the women are substantially helped out by the men. Usually, that rescue scenario doesn’t work for me in anything but a pure fairytale format. I think it worked here because I never thought that the heroines couldn’t rescue themselves, but rather that they allowed the heroes to help. There’s a reciprocal element that is absolutely key in establishing a relationship that is mutually beneficial, and I saw that in their behavior. Oh yeah, It’s HK Dimon. The sex is steamy. The repartee is witty. There are some things in life you can just depend on, thank goodness. Grade: B+

Christi Barth’s Ask Her at Christmas is the second and shortest story in the anthology. It is set in Chicago, just before Christmas, and it’s a friends to lovers story. This is one of my favorite setups, but it didn’t work for me here. Caitlin and Kyle have known each other since their college days at Northwestern and are each others’ best friends, and Caitlin has been in love (unrequitedly) for most of that time. Kyle has recently decided to marry Monica, whom he does not love, because it will cement a merger between their respective family firms. Christi throws herself into helping Kyle create a romantic setting for his proposal, even though she thinks Kyle should marry for love.

Kyle is an incredibly gorgeous computer geek, and Caitlin is a sexy art history graduate student with great hair and eyes and a hot body. They’ve apparently managed a Harry-met-Sally relationship despite the fact that each finds the other extremely attractive. I suspended disbelief and continued, but then it turns out that Kyle’s future wife is nasty, manipulative, and selfish, and his father cares only about the business. Caitlin, meanwhile, continues to enable Kyle’s bad choices until Kyle finally comes to his senses. The Chicago setting was beautifully done and made me wish I were there, and the ending was romantic. But I really wanted to tell both Kyle and Caitlin to snap out of it, à la Cher in Moonstruck. Grade: C

The final story is Jaci Burton’s The Best Thing. This is my first story by Burton, and it is part of a series featuring the Kent Brothers. Brody Kent is the last unmarried brother, and it looks as if he’ll stay that way. Brody doesn’t date any woman for long, and even his loving mother calls him a womanizer and manwhore. Tori Lewis, Kent Construction Company’s office manager, has been in love with him for years, but she kept her feelings under wraps until a year ago, when Brody kissed her at the company Christmas party. For the last year she has barely been able to talk to him, and her demeanor at the office has changed. When Brody finally confronts her and insists on talking about what happened, their uncomfortable conversation turns into a steamy, sexy encounter that lasts all weekend. But what happens when they have to return to work and everyday life? Can Brody change? Can Tori take the chance that he will, all the while fearing that if he doesn’t, she loses both Brody and the Kent family?

Tori and Brody are both appealing, relatable characters. Brody knows exactly what he is and is happy about it, but he tries to do the decent thing and be honest with the women he sleeps with. Tori knows that her fear of getting involved with Brody isn’t just about his reputation but about her fear of losing her job and her surrogate family. When they find themselves enjoying their developing relationship, they don’t spend a lot of time second-guessing their feelings, and while the crisis that separates them in the end is a bit predictable, the story is so well executed that it doesn’t feel like the umpteenth retelling of the tale.

Although I haven’t read the other stories, I didn’t have any trouble keeping track of what was going on. The relationships among Wyatt, Ethan, and Brody are nicely drawn, and while there are a lot of Kents running around, these types of family settings seem appropriate to Christmas stories. The small town atmosphere is neither idealized nor disparaged, and the closeness and nosiness of small-town life adds a convincing dimension to the conflict between Brody and Tori. It also provides a Big Moment at the end that could really only happen in this setting, and that is saved from being irretrievably over the top because Brody really does need to grovel and Tori deserves the gesture. Grade: B