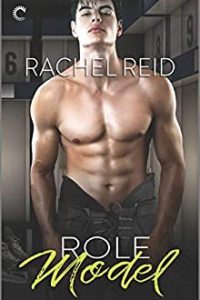 I read Common Goal a while back and more recently, Heated Rivalry (I am completely an Ilya Rozanov fangirl now) and I jumped on (aka begged for) an ARC of Role Model immediately after because I wasn’t ready to leave this world. (Now I’m reading Game Changer for pretty much the same reason). Which all goes to show that the series can totally be read out of order (although reading Heated Rivalry will be necessary before your next book as it features the same main characters – be still my heart.) Tough Guy will likely be next for me because I have no willpower.

I’ve always enjoyed a good sports romance and even though I know basically nothing about hockey (it’s not really a thing in Australia – hockey here is mostly of the field variety and it’s not a huge deal apart from perhaps during the Olympics) I’m irresistibly drawn to romance novels featuring its players and teams. What I especially like about the Game Changers series is that it isn’t limited to just one team. The books feature a number of different teams (which Google tells me are all fictional) and encompasses the whole (fictional) NHL. It means the pool is wide and deep and the world overall feels more authentic.

Troy Barrett is a 25-year-old player who’s just been traded from Toronto to Ottawa. Ottawa is not a good team. Ilya Rozanov is there now but nobody knows what possessed him to transfer to such a substandard franchise. (We readers know of course *wink*). Troy isn’t stoked about the move but he doesn’t have a choice about it. He had been best friends with Dallas Kent, a star player for Toronto but after a leaked video of Troy calling Dallas a rapist goes viral, the team dumps him and Ottawa are the lucky ones to pick him up. A number of women have anonymously come forward on social media to accuse Kent of rape. While Troy didn’t ever witness anything, he believes them. It’s not super clear to me why that is exactly, but it’s alluded to that Troy has seen and heard how Kent treats and refers to women generally and has put 2 + 2 together. (Perhaps there’s something in Tough Guy that would make it clearer?) It doesn’t really matter why Troy believes the women though. The story isn’t about Kent.

Prior to the move to Ottawa, Troy had been someone he wasn’t proud of. Deeply closeted out of fear of his own father and the (likely) opprobrium of his fellow players and the fans, he adopted the persona of macho asshole – which ultimately led him to being best friends with Dallas Kent. (I liked that Troy’s memories of Kent weren’t all bad – there were some fun times in there – even monsters aren’t generally just one thing.)

After his outburst to Kent, which cost him his Toronto jersey, he’s ready to make some changes. He is not made super  welcome in Ottawa initially – they’re suspicious and wary of him and they have good cause. He’s not proud of his prior behaviour – some of which included participating in homophobic slurs for example – but he doesn’t want to be that guy anymore. He always takes responsibility for his own actions and he doesn’t try to excuse them and that went a long way for me. People can change and grow. I was readily able to accept him as hero material.

Troy’s father is a “good old boy” full of toxic masculinity and narcissism. He’s been a shitty dad all Troy’s life but it’s hard for Troy to let the relationship go completely. He knows, if he comes out, his dad will walk away from him forever. But… maybe that’s a good thing?

Since Scott Hunter came out publicly (in Game Changer) the NHL has been slightly less homophobic but there are still vanishingly few queer (fictional) players (past and present) who are out. Troy is terrified of what may happen if he reveals who he really is but he is also desperately unhappy hiding.

In Toronto, he’s taken under the wing of scene-stealer Ilya Rozanov and a previous teammate, Wyatt Hayes ,who give him a chance, despite initial caution and he begins to release his fear and anger and show himself as he really is (apart from his sexuality that is). He also meets Harris Drover, the team’s social media manager.

Harris is not super-tall, and has a stocky build. He doesn’t have the muscle mass of a pro hockey player because of course. That is to say, he’s a regular, good-looking guy. Troy finds him completely adorable. Harris is also openly out and proud and is accepted by everyone on the team and within the franchise. Troy is blown away by the possibility of what this represents. But he’s also deeply smitten with Harris.

Harris is also kind and generous. He sees in Troy someone who needs a friend and if he’s also got a massive crush on said someone well he doesn’t have to do anything about it. (Sure Harris, keep telling yourself that.)

Harris was born with a heart defect and spent a lot of time in hospital as a child. He’s had multiple surgeries. He’s healthy now but has to be careful about some activities. It’s not a significant part of the plot but informs his character and that way he interacts with others and the things he cares about. He’s very close with his family and loves dogs (so he’s obviously amazing). He’s capable and smart and dislikes being treated as fragile.

Essentially Role Model is a coming out story. The role model of the title is Harris. Troy aspires to be that comfortable with himself that he can be out, that he can be himself with no filter or mask. After a near-death experience,what began as a few tentative steps out of the closet becomes more definitive, albeit done in manageable bites.

I enjoyed the humour, most of which came from either the banter between some of the players (especially via Ilya) or from Harris.

Harris was one of the only ones wearing a shirt, but it was a tank top, so he felt practically naked. He was tossing a Frisbee with Bood and Dykstra, which was a physical activity he was actually good at.

He’d engaged in another physical activity he was good at last night, so he was on a real fitness kick lately. Practically a decathlete.

I feel you Harris!

I don’t want to give too much away but I particularly liked the ending of Role Model. And by that, I don’t mean the last chapter or page. I’m talking about the whole way the story is brought to a close and what does (and especially what doesn’t) happen as we reach the HEA. The novel had tension which kept me engaged and reading and an underlying charm which had me smiling to myself often. There is a definite HEA but in some ways the book doesn’t conform to genre conventions (in a good way).

There was one part of the story which felt a little underdeveloped. Troy is basically threatened by the NHL Commissioner when he identifies himself as an aspiring ally of victims of sexual assault. The league is being very shitty about the allegations against Dallas Kent (which sadly feels all too realistic) and wants Troy to shut up. What was in the book was fine but I did want a little more. I wonder if there might further developments in this regard in future books though?

The romance – which is why I read the book, felt fully developed and I was delighted by how it unfolded.

→ Kaetrin
Previous article: REVIEW: Yours Cheerfully by A. J. Pearce
Next Post: REVIEW: The Steal by M.J. Rose and C.W. Gortner