I’ve been a fan of your books since I read The Lions of al-Rassan and lamented the fact that it was a standalone. While I haven’t read every GGK book published, I’ve read enough to know that they are part of an impressive and imaginative body of work. When I learned that River of Stars could be read on its own, even though it is set in the same world as its predecessor, Under Heaven, I requested it for review and I’m so glad I did. Not every authorial choice worked for me, but it was absolutely a pleasure to be in the hands of a master stylist and storyteller. 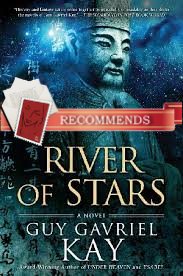 River of Stars is set in a 12th Century country, Kitai, whose characteristics are drawn from the history of the Song Dynasty of China, but it is rightly called a historical fantasy rather than a historical novel. The main characters and the overall story arc are based on real people and events, but the book neither fictionalizes real life individuals nor drops made-up characters into real-life events. This allows the author to create relationships and events that did not exist without pulling the reader who has knowledge of the history out of the story. I wish more authors would think of their historicals this way (when appropriate, obviously), because it frees both the author and the reader to enter the world without thinking about what it does and doesn’t have to contain.

There aren’t many of the standard markers of traditional fantasy. There are events and circumstances that don’t fit into a strictly rational conception of the world, but they seem completely reasonably within the worldview of the actors. I enjoyed this way of situation the book in the fantasy genre, but readers looking for a more traditional “fantasy” read might want to take note.

It’s difficult to say much about the plot without giving away one of the great pleasures of reading an epic novel, which is watching the complicated cast of characters and the events unfold. Over the last couple of centuries, Kitai has become a truncated version of its former, more expansive dynastic self, with uncultured but powerful warriors to the north and a well-meaning emperor who leaves day to day policy making to his advisors. Not surprisingly, this creates both factional conflict and increasing hardship for his people. Simmering discontent bubbles to the surface and leads to open warfare, within and across Kitai’s borders.

For romance readers, there is a slowly developing relationship between two of the main POV characters. At the beginning we meet Ren Daiyan, the younger son of a relatively minor civil servant, who is training to become a warrior even though that is not a high-status occupation in Kitai (only the second or third sons of farmers go into the army). He achieves this goal, but in anything but a predictable way. We also meet Lin Shan, an unusually educated young woman who is a promising poet. Although they eventually develop a romantic relationship, they grow and mature separately and have individual experiences that recall epic romances of old rather than the kinds of stories common in the genre today. And the reader spends long stretches in the POV of other characters, some of whom come and go quickly while others recur regularly throughout the book.

Kay is justly known as much for his stylistic achievements as his plotting and characterizations, and River of Stars is no exception. The writing is lush and elegant, and there is a wealth of description. I tend to prefer spare prose, but when someone writes as well as this I enjoy the change of pace. And the descriptions aren’t superfluous; descriptions about the natural world do more than provide atmosphere, they signal the importance of that world in the lives of the characters and they foreshadow the role nature plays in man’s choices. For example, early in the book we get this description as Daiyan is making a journey from his village to the site of a murder:

There were nightingales in these woods. Daiyan’s brother had come here hunting them. In Hanjin, at the court, they wanted nightingales for some enormous garden the emperor was building. Officials paid considerable sums for them. It was folly, of course. How could a caged bird survive the journey from Szechen? They’d have to go downriver through the gorges, then by imperial courier north. If the couriers rode fast…the very idea of a birdcage bouncing by a saddle was sad and amusing, both. Daiyan liked nightingales. Some complained they kept you awake at night, but he didn’t mind that.

Those nightingales (and the enormous garden) turn out to be a harbinger of conditions that are critical to the story that unfolds.

This is not a book to hurry through, and that is both a strength and a weakness. It is a strength because aren’t we, as romance readers, frequently wishing for books that recall the epic romances we used to read? While the romance is just a part of the story here, River of Stars may well be closer to the epic romances of the 1970s and 1980s than today’s historicals are. On the other hand, there are a lot of POVs and story lines that come and go. A fascinating character pops up, only to vanish a few chapters later. And while Lin Shan is a terrific portrayal of a strong and interesting woman, there are quite a few characterizations of women that are more stereotypical.

Which brings me to my primary caveat about the book. This is a novel of ideas as much as an action drama, and the characterizations suffer somewhat. Even the main POV characters don’t feel as present, as alive, to me as they did in The Lions of al-Rassan or Tigana or Song of Arbonne. The story is about the fall and rise of a society, and the warp and weft of that societal change takes center stage; as a result, the characters sometimes feel primarily like players on that stage. They’re interesting and compelling, but their personal idiosyncrasies and desires feel subordinated to the larger tale.

Nevertheless, this is an engrossing read. It demands your attention, but once you sink into the story, it unfolds in a rich and satisfying way. Grade: B+