REVIEW: Rest and Be Thankful by Helen MacInnes

I was a huge fan of the late Helen MacInnes back in the day, and when Liz Mc2 blogged recently about Friends and Lovers, it made me think of MacInnes’ other non-espionage novel. I downloaded a sample and was instantly hooked. I hadn’t remembered nearly as much as I thought I had, nothing beyond the fact that it was set on a ranch and there was a romantic storyline. 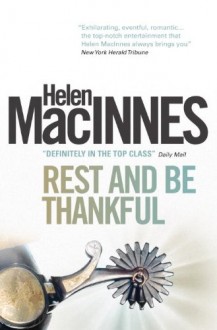 The main characters are Sarah (Sally) Bly, a 37 year old writer of cookbooks, and Margaret Peel, a 53 year old woman of independent means, who have spent the last two decades living and traveling together (platonically). Margaret wrote a light novel when she was young and it made a lot of money for her, but she has kept this a secret from her upper-class artistic and literary friends because they look down on that kind of fiction. After nearly two decades in Europe (including doing resistance work during the war), Margaret and Sally have returned to the US, and the book opens with them driving across the country with their Hungarian driver, Jackson (real name Tisza Szénchenyi). Car trouble causes them to seek shelter on a ranch in Wyoming and they decide, on the spur of the moment, to buy a rambling ranch house and use it as a retreat for writers.

The Flying Tail ranch’s owner, Jim Brent, loves the house, but he needs money to run the ranch, so he sells it to Margaret while keeping the other buildings and acreage, and henceforth the working ranch will coexist with a literary retreat. Sally and Margaret invite half a dozen unpublished writers for the month of August, and the rest of the story is about their experiences, the interactions between the ranch and small-town Wyoming folk and the city people, and Jim and Sally’s slow-burn romance.

MacInnes writes very well, with an eye for detail and an easy conversational style. She’s a political writer, and there are a number of scenes in which different characters debate the war, communism v. liberalism, and the like. There is a city v. country thing going on as well, with the New York City folk being jaded and ignorant of what the “real” people in the rest of the country are like, but there are also some amusing stereotypes of country folk. The cowboys, for the most part, are depicted sympathetically and non-stereotypically, and the one extended scene with Native Americans is relatively nuanced, especially given when the book was written. Different characters embody different approaches to war, politics, and literature, and there is quite a bit of sharp commentary on the writing profession and the New York (and Hollywood) literary communities. Some of Margaret and Sally’s discussion about characterization could take place today:

“No one ever told me this. It really is all so—so different. Tell me, why do movies about the West always insist on bandits; and long, long bars; and women having fights in spangled skirts?” She didn’t wait for the answer, but disappeared once more into the bathroom.

“Because this is the day of the Classified Character,” Sarah said to the open door. She began to tidy the bedroom as she waited. “All heroines are slender; heroes are never bald; rich men are ruthless privateers or tolerable old fools; politicians are stupid or crooked; all children are cute; poor men are victims of other men; all Frenchwomen are chic; all Englishmen keep such stiff upper lips you can’t hear what they’re saying; all Italians are so human; all people in authority are petrified; all professors are dehydrated; all scientists are devoted to test-tubes. Do you want me to go on? I’ve a long list.”

“What was that, Sarah? The water was running, and I couldn’t hear you, I’m sorry.” Mrs. Peel returned shivering from the bathroom, and began dressing with lightning speed. “I suppose they would have considered it a sign of weakness if I had lit a fire? Well, this is one morning when I won’t take very long to get ready.”

Her voice became somewhat muffled as she struggled with a sweater. “You know, Sarah, most of the books we read abroad about America weren’t of much help to us. It wasn’t our fault entirely that we knew so little about our own country as it is today.”

The romance is understated, probably to a fault for some genre romance readers, but I enjoyed it a lot. There is one negatively-stereotyped female character (along with some dated language about psychological issues) and there is one stereotypical Communist-sympathizing character, but I didn’t find them to distract from the overall strength of the book. There is a bit of a love triangle and a secondary romantic storyline, but the women characters are drawn with sympathy and aside from the two characters I’ve mentioned, most of the others are thoughtfully portrayed and a couple of them surprised me in the way they developed.

I did wonder at one point whether MacInnes was sympathetic to the House Un-American Activities Committee’s work, but the attitudes fit the characters and the time. In the end MacInnes is good about showing the benefits of city life, not just the bad points, although she clearly tilts the deck toward big-sky-America authenticity. This book was published in 1949, and everyone is still feeling the aftereffects of the war, both psychologically and in practical ways.

If you like Mary Stewart, you’ll probably like this novel, although there’s no suspense to speak of. But the writing and the characterization are similar and of similarly high quality. I’m very happy to see MacInnes’ backlist being digitized and look forward to rereading Friends and Lovers as well as some of my other favorites. Grade: B+