I read this book years ago based on reviews and posts at the regency listserv and I loved it. I will say, however, that it’s not going to be for everyone. To begin with, you made it first person and secondly, it’s fairly realistic in it’s portrayal of the fact that even close family members don’t always get along. It also takes a little while to truly get going but readers who persevere past the first chapter or two will be richly rewarded. 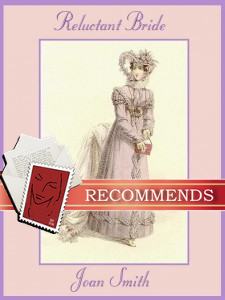 Elizabeth, Lizzie, Braden is a 25 year old spinster who’s been forced to think about selling a family heirloom, a diamond necklace from the reign of Elizabeth I, in order to pay the mortgage on the family estate. It’s not just the usual, “oh, I must sacrifice everything in order to save the family farm even though I’m not going to be living here anymore” that drives me nuts. She’s trying to secure a place to live for herself and her aunt. Driven to the brink of bankruptcy by bad estate managers, she decides to write to her uncle and take him up on his offer to buy the necklace, then take it to his estate for the sale.

Along the way, her carriage is forced off the road by a fast driving gentleman and she, her aunt and both carriages are damaged. After going to a nearby town’s inn, her aunt discovers that the diamond necklace is gone. Lizzie accuses the gentleman, who is proven innocent, but feeling that his honor is on the line, he decides to help the women track down who stole the necklace. And hence starts a whole book of fun.

Lizzie and Sir Edmund Blount don’t pull any punches in their opinions of each other or in what they say. With these two, it’s hate at first sight. He’s a tyrant and she’s a nag. But the power ratio between the two remains fairly even. This book has some great dialogue and both have chances to get some punches in.

After Edmund proposes to Lizzie she says,

“Next thing to go will be your freedom. What of your misogamy?”

“It got smashed to bits, along with my carriage wheel. I expect it is even now lying in a ditch outside of Devizes, gasping its last gasp. Poor devil.”

“I would make a perfectly wretched wife, Edmund. I am a nagging, foul-tempered harpy, who would keep you under cat’s paw.”

“That is exactly the sort of lady I require. A watering pot would not suit me. I recognized you for an archshrew when you advised me to find a strong-willed woman, provide her with a club, and marry her. I considered it one step shy of a proposal when you said it. Shall we go shopping for a club now? I will just remind you, however, that you cannot get my ring off, and your alternatives are to either lay legal claim to it, or have the finger removed by surgery. It is entirely up to you.”

This was one book I truly hated to see end. B+