I volunteer to teach a continuing education class at North Carolina State University’s Encore! program, which is a non-credit program for those 50-and-over. Once a year I get to teach a course of 6 classes on anything I want to, with students who really want to be there, without having to grade a damn thing. I love it. In previous years I’ve done Jane Austen (in general), Pride and Prejudice, Emma, Romance in the South (Nora Roberts’ Midnight Bayou, Claudia Dane’s first Courtesan book, and…something by Virginia Kantra–Claudia and Virginia visited the class). This year I’m doing Georgette Heyer. I had a hell of a time picking just three of Heyer’s books to discuss, but finally settled on Regency Buck, Cotillion, and Sylvester, for how they play with the stock Regency characters and plots and the meta-commentary in Sylvester in particular. I just finished teaching Regency Buck today, so I figured I’d ease back into writing reviews now that the semester’s done (thank the gods) with a review of Georgette Heyer’s very first Regency romance. 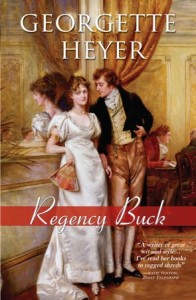 Regency Buck was published in 1937. At that point, Heyer had published six Georgian (that is, 18th-century) romances, four historical novels, four contemporary novels (later suppressed), and four mystery novels (plotted with the help of her lawyer husband). I have no idea what order *I* read Heyer’s romances in when I was a teenager (thank you to my mother for introducing me to them!), but I always thought Regency Buck was more the culmination of all Heyer’s Regency knowledge, not the very start of her creation of the genre. But the start it is. It is succeeded by An Infamous Army and Spanish Bride, both of which are very much based in real life. An Infamous Army, of course, is set during Waterloo and is one of the most accurate fictional representations of Waterloo, but with a fictional hero and heroine. The Spanish Bride is a fictional representation of the real-life people Sir Harry Smith and his child bride, Juanita (who, of course, are the namesakes of Harrysmith and Ladysmith in South Africa).

Anyway, Regency Buck is very much written along the lines of An Infamous Army and The Spanish Bride: it’s more a historical novel than anything else. Except for the hero, heroine, and their immediate family, everyone in the novel is a real historical person. So rather than move toward more and more historically-set novels, Heyer started there and moved away from them throughout her career.

Miss Judith Taverner and her brother, Sir Peregrine Taverner, are extremely wealthy. They journey from Yorkshire to London to meet their guardian, only to find he’s not the friend of their father as they thought, but, due to their father’s bungling of his will, is actually that man’s son, Julian Audley, fifth Earl of Worth. Judith and Sir Peregrine both tangled with the previously-unknown-to-them Worth on their journey to London and find it insupportable that he is their guardian, in charge of their fortunes and circumstances, but there’s nothing to be done. They set themselves up in London, join High Society, have a few adventures, and both get happily married off by the end.

The suspense of the novel is twofold: will Judith get over her anger and pique and admit she loves Worth, and who is trying to kill Sir Peregrine (Judith stands to inherit almost all of Perry’s fortune if he dies, which will supplement her own considerable 80,000 pounds)? No matter how many times I read this book, I marvel at how well Heyer manages to manipulate scenes and Worth’s own inscrutability and omniscience to make his heroism/villainy truly in question.

Worth calls Judith “Clorinda.” Jennifer Kloester, Heyer’s biographer (long-awaited biography coming out October this year in the UK, sometime in the Spring through Sourcebooks in America), told me that Clorinda probably referred to the warrior-queen character from the epic poem “Jerusalem Delivered” by Italian Renaissance poet, Tasso. And Judith is very much the warrior-queen. She has money and presence and style and she knows how to use them all, especially under the tutelage of Worth’s good friend Beau Brummell. She’s one of Heyer’s strong female characters, but in the end, she has no idea of her own feelings when it comes to Worth. She knows she doesn’t love any of the other people who ask her to marry them (including the Duke of Clarence, the future William IV, in a historically accurate cameo), but she refuses to believe she loves Worth.

Worth himself is one of Heyer’s apparently omniscient, almost omnipotent aristocrats, supremely comfortable in his position, able to wield amazing power apparently with impunity. He doesn’t tell anyone what he’s thinking, certainly not his own heroine, and everything goes his way. The gothic overtones of the story truly make one question whether he’s the villain or not.

Although Heyer basically created the Regency romance genre as we know it today, the actual romance aspects of most of her books are layered in very lightly. We know who the hero and heroine are and we search very carefully for clues of their feelings for each other. We are led to believe that Worth falls in love with Judith at first sight, but his position as her guardian forbids him from actively pursuing her. If he did, it would be an abuse of his power as her guardian, akin in some ways to sexual harrassment and incest combined, and in all honor, he must spend the year of his guardianship unable to court the women he adores. And rather than courting her anyway, as a modern Regency hero might, with scenes of forbidden passion, Worth actually refrains, out of honor, except for dropping hints here and there that his guardianship of Judith is much more burdensome to him that she could believe. Except for two kisses, and an embrace, Judith and Worth express their feelings through their verbal sparring. No torrid scenes for Heyer anywhere in her fifty year career.

Overall, Regency Buck is, I think, a very difficult book to start with in Heyer’s oevre. The sheer number of historical personages to try to keep in one’s head, as well as the deep-end-of-the-pool introduction to masculine Regency society (which we never EVER see in Austen, after all), is sometimes difficult to work through. That said, the students of mine who have never read Heyer before loved it, but — interestingly enough — it’s rarely a favorite among Heyer fans. I love it for its amazingly accurate historical detail and for its hero and heroine. I love Worth and Judith both. And it really does establish the Regency romance genre to such an extent that this 75 year old book reads — barring the missing sex — as very very modern.