Note: This review is going to be spoilery for White Cat because there’s no good way to discuss Red Glove without revealing the big secret of that book. Skim very selectively if you’re spoiler-phobic!

Last year, you introduced us to the Curse Workers. In the Curse Worker world, magic was outlawed along with alcohol during the Prohibition era. And while the ban on alcohol was eventually repealed, the ban on magic was not. This resulted in the use of magic falling under the control of organized crime. Because curse working is a magic system based on touch, it also affected society in an interesting way: everyone wears gloves — even non-curse workers — and walking around without gloves on is scandalous and akin to walking around naked. I love little details like that! 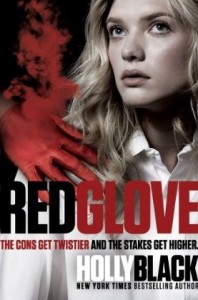 In White Cat, Cassel Sharpe thought he was the only ordinary member of a family of curse workers: his grandfather can kill with a touch, his mother manipulates emotions, his brother can alter memories. But when you grow up in a family of con artists, you can’t help but pick up some of the tricks of the trade yourself.

Unfortunately, Cassel discovered the truth: he wasn’t the only normal guy in a family of curse workers. He was a curse worker like the rest of them, and his ability is one of the rarest — he can transform things into other objects. The reason why he didn’t know is because his own brothers were tampering with his memories in order to use him to commit crimes for their own benefit. Did I mention that his family is also a little dysfunctional? I mean, on top of being a family of con artists with ties to the mob.

Red Glove opens with Cassel coping with the fallout of White Cat. Readers may recall that his mother, as a misguided favor to him, made the love of his life, Lila, fall in love with him. This is tragic on many levels because Cassel has loved Lila since forever and now at last she reciprocates, but it’s not real and he knows it. It’s led to awkwardness between him and Lila, and resentment between him and his mother.

(There is a very uncomfortable scene between Cassel and his mother in the first chapter that made me cringe. Not because it was terrible in a quality sense, but terrible in an abusive sense. Readers sensitive to such content may need to brace themselves. It’s another sign of how dysfunctional Cassel’s family is and that his mother’s ability makes her emotional unstable in awful ways, but such scenes can be very hard to read so I wanted to warn.)

The situation with Lila is further complicated when she enrolls at his school. She knows about his mother’s curse and knows that her feelings for him are manufactured and false, but she hopes to ride out the curse by his side because to do otherwise is painful for her. It’s such a sticky spot for Cassel to be in.

To make matters worse, his oldest brother is murdered and the FBI seeks out his help to find the killer. Any good scam artist with mob ties knows that even being suspected of having ties to the Feds is the kiss of death. Cassel doesn’t want this kind of attention, but what can he do? The government knows his secret. But it’s not just the government who wants him. Lila’s father, a big-time mob boss, wants him to join the business. After all, Cassel’s grandfather worked for him. Why not Cassel himself?

But Cassel doesn’t want to join the Feds and he doesn’t want to join the mob. For so long he wished he was a curseworker like the rest of of his family but now that he actually is, he realizes he wants a normal life more. And for him to even have a chance at realizing it, he’ll have to find his brother’s murderer, even if he has to run the biggest scam of his life to accomplish it.

I really love a plot full of twists and turns. While there’s no big secret along the lines of the revelation from White Cat, the identity of the murderer still took me by surprise because up until the point where we get the major identifying clue, I honestly did think it was someone else. Mostly because the true identity of the killer seemed so obvious I figured it was a red herring. On the other hand, I felt the true identity might also have been a little neat and pat, making it so that it was overshadowed by other things going on in the book.

I also think Cassel’s the best kind of protagonist for this sort of plot because he’s smart and knows how to run a good scam. The problem is that he’s almost too good at what he does while also being a fundamentally good person, so the people he wants most to trust him don’t and the people he wants nothing to do with do.

The subplot involving Lila is very heart-wrenching. It’s the good kind of drama. Lila has always been out of Cassel’s reach by virtue of the fact that she’s a mob boss’s daughter while the most he can ever aspire to is work for her family. But now he finally has his chance except it’s not real. He’s tempted to succumb to the illusion, as temporary as it is, but then what will he do when his mother’s curse wears off? I think Cassel’s reaction to Lila’s false feelings for him, and how he handles it, highlights the very best of him as well as pushes his biggest weaknesses.

I also enjoyed the continuing subplot involving the rights of curseworkers and their continued fight for freedom and recognition. I thought it tied in nicely with the storyline involving Cassel’s friends, Sam and Daneca, and confirms some suspicions that were raised in White Cat.

Books like this remind me how much I love smart characters who are up against opponents who are just as smart as them, albeit in different ways. It feels evenly balanced, and I think it helps make the plot more exciting because in a world like this, you can’t be 100% sure Cassel will end up on top. It’s not for everyone but I love that uncertainty and I think so will anyone who loves a good con artist character. B+