Recently, I reviewed your book Ruthless and have been given the honor of doing the same for the second book in your House of Rohan series-‘Reckless. If I may be so bold, I would like to address this particular review to you hero, Adrian, Viscount Rohan. 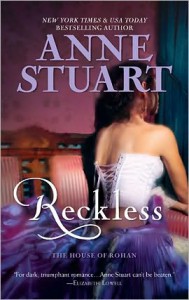 Adrian, Adrian, Adrian. I can't believe you're a blonde! It's so at odds with your personality-‘which is dark. Shouldn't your hair match the contents of your black and jaded heart? But that's neither here nor there. To the point! I think we can both now say that the sins of the father shall be visited upon the son, especially when the son insists on committing all of his father's old sins, only in England instead of France.

Not that you don't do that beautifully. You do. You are a beautiful sinner, just like dear old dad. You and Pops also seem to share the same taste in women-‘now, is that Oedipal or just genetics? Probably neither. I suspect it is simply a matter of taste, based upon the fact that you are both so clearly Scorpios. And if there's one thing I know about Scorpios is that beauty is less important then being interesting. Pretty women never stay weird, but intelligence is forever. (Stay in school, kids!)

Speaking of women, let's talk about Charlotte, shall we?

When your story begins, Charlotte is the 30 year old spinster companion to her cousin, Lady W-‘, a recent widow who has been celebrating that change in lifestyle by blazing a trail of scandal through the London ton. Mainly she does this by associating with all the wrong people, particularly those debauched aristos belonging to the Heavenly Host. You remember them? They're your buddies, too. They were the product of one of your father's more asinine ideas. And by asinine I mean, they engage in behavior that does rather underscore all the many, many, many reasons why the French rabble decided to cut off their aristocracy's heads. In romance we tend to romanticize the aristrocracy, but two millenia of peasant's blood raging through my veins makes think they had a point. Especially, when all they do is throw parties. Who has that kind of time? Too bad that like the Hydra, rank elitism cannot be destroyed by head-chopping. Don't look at me like that, Adrian. We both know it's true.

Anyhow, back to Charlotte, who totally unlike her cousin, has been hanging out on the edges of the ballroom, dwindling into dowdiness. She's also been harboring a massive, heart-breaking crush on you ever since that one time you danced with her three years ago. She devours you with her eyes whenever she sees you, but avoids any actual contact on account of your having been so utterly rude to her after that ill-fated dance. Did you really have to make a snide comment about her lack of grace and skill on the ballroom floor? That wasn't very gentlemanly of you. But then, Adrian, you are kind of a bastard. Not literally, of course.We know very well who your parents are.

Since Charlotte is there only to observe, she is dressed like a monk-‘that is a man. Being so tall, she's under the adorable delusion that no one will recognize her. Of course, you do. Using your powers of acute observation you manage to see through this idiotic masquerade. Oh the dumb things a girl will do for love! Having seen through said disguise, you realize, being you, there's only one thing to do.   Abscond with Charlotte, take her to a private grotto and proceed to seduce her in the most rakish of fashions, obviously. Primarily you do this by kissing the hell out of her in one of the longest and most delicious kissing scenes in my recent memory. I mean, eventually, you get to the shagging bit but the kissing is what gets Charlotte. And me. Oh to be kissed like that! And on a Wednesday night. If she wasn't already in love with you, she'd have been by the end of that kiss.

He settled his mouth against hers, a second after she drew in her breath, a slow, deep kiss, then lifted his mouth.

"Breathe," he whispered before he slanted his mouth against her, changing the angle, reveling in the delight of her untrained mouth. He lifted his mouth to bite her lip.

"Again," he whispered. And used his tongue.

Meanwhile, your father's French cousin-‘the one who has always resented him-‘is busily planning your destruction. He's got this mad idea that if he kills you, he will inherit all the titles. Uh huh. I know. But this whole Charlotte thing has thrown a wrench into his schemes. Unlike you, cousin Etienne-‘whose name I, for some reason always think is Bernard-‘can totally see that you are bat-eating crazy about Charlotte. He's smarter than you. Not generally, just in this. Charlotte is a threat to his plan. What if you marry and breed on her before he gets rid of you? What if she's already preggers? She has to go. And he begins to plot her demise.

There's also a subplot about the dying Monty, Lady W-‘, and Monty's new vicar, Simon. Romance blossoms for the latter two as they fight over who is best suited to care for Monty, and spend the rest of the book falling in love by arguing vehemently about nothing, ala Beatrice and Benedict. But you aren't overly concerned by their shenanigans. Just Monty's health.

Like most of Anne Stuart's heroes, I'm real keen on you. I have to say that for whatever reason I preferred this book to Ruthless. Who knows what alchemical processes are at work to make one story function better than another? Is it on the part of the author? Or the reader? Who knows? I don't. In many ways it had a very similar plot structure as your parents' story, but there really are so few plots in the world that's not saying much. For whatever reason, this particular incarnation of the rake meets spinster tale was delightful. The reason Ruthless didn't work for me was because I didn't believe your dear old dad was a bad as all that and the plot hangs on me, the reader, being convinced of his pure evil rakish-ness. Your story does not hang so much on your bad boy status. It's more about figuring out what that two days together meant. Plot-wise, not much happens. If I were two outline events there wouldn't be many of them-‘especially for the lengith which digitally says somehting like 408 pages. Yet, this might be why the book works. The scenes are carefully teased out, expanded, lengthened. And they are well paced as well. I never felt rushed. I blushed, but I never felt rushed. Maybe it was the words. Words, as you know, Adrian, can be powerfully seductive and conver a host of sins.

When it comes right down to it, I believed in the relationship, both in the way you and Charlotte fell for each other and in the way you came together. It alaso seemed totally belivable that you could be the son of Francis and Elinor. Your blond hair was probably representative of that. You just weren't as awful as your father-‘by which I mean dense. Yes, you weren't as dense as your father, much more in touch with you emotions, you are. I suspect that's on account of your mum and a good childhood.

The one thing that bothered me, was that I was perpetually confused by what year it was supposed to be. My galley copy said 1804, but textual references seemed to deviate from this year, both in the mention of hoops as being a part of women's clothing, the French still chopping heads, and not a word about Napoleon-‘who would have just crowned himself emperor (ha! Bonaparte, you rascal.). More importantly, I can't figure out how this date relates to the date in the first book. I don't know if this is a mistake carried over from a draft that was never fixed in the galley copy or what.

All in all, I enjoyed this book very much-‘particularly the kissing. B+