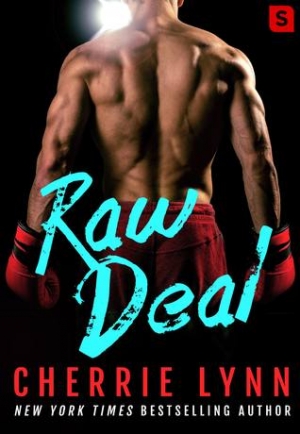 I’ve enjoyed previous books from you, particularly a couple of your Ross Siblings series so when I heard you had a new book coming out I was interested. My interest only deepened when I read the blurb.

“Savannah’s brother was killed in a cage fight with Mike “Red Reaper” Larson after a savage punch to the head.

When Mike shows up at the funeral, he’s nothing like Savannah expected. Gone is the fierce, brutal beast she’s seen in the cage. In his place is a beautiful man torn with guilt, seeking forgiveness, and willing to do anything to ease her pain.

Her family doesn’t approve, but her heart doesn’t stand a chance. Irresistibly drawn together, neither of them can deny the intoxicating desire unleashed between them, turning their pain into the most exquisite pleasure.

But every time Mike steps into the cage, Savannah knows she could lose him too. She can’t go through that again, but how can she let go of the one man who sets her body and soul on fire?”

How, I wondered, were you going to pull off a successful HEA with that set up?

And truthfully, I was still wondering that quite a bit of the way into the book. Savannah’s brother, Tommy, was married to Rowan and Rowan is devastated by Tommy’s death. Tommy was also the golden boy of Savannah’s family and their parents are similarly devastated. Of course Savannah is grieving deeply too but right from the start, she is inclined to believe that Tommy’s death is a tragic accident and not actually Mike Larson’s responsibility (and indeed, all evidence supports this). When Mike and Savannah start to seeing each other, the reactions from Savannah’s family are… not positive. There is the very real possibility, for a long time in the story, that if Savannah chooses to pursue a relationship with Mike she will be further imploding her own family and sacrificing her relationship with them entirely. I must say, the stakes, as high as they were, held my interest. But they would not have done had there not been a palpable connection between Savannah and Mike. Their chemistry was off the charts but it was not just a sexual thing either. There would be something really distasteful about Savannah getting her rocks off with Mike so soon had that not been the case. Given the fine line you had to tread in this book, I tip my hat to you.

Mike comes from a rough background and has, literally, fought his way out of that life. In doing so he provided a safe space for his brothers, Zane and Damien. Mike doesn’t think well of himself and after the fight with Tommy, his self-opinion diminishes further. While injury of the sort that resulted in Tommy’s death is a risk (albeit relatively rare I understand) any fighter takes when stepping into the cage, Mike struggles with being the man who dealt the killing blow.

But it irked him when people he hadn’t seen since the accident acted as if nothing had happened. His fucking world had reset, and they were able to ignore it.

It’s not all about him though. He feels terrible for his part in what happened and he desperately wants to reach out to Tommy’s family. To say sorry. To ask if they need anything. To try, if at all possible, to make amends. His brother, Zane, thinks it’s a terrible idea but Mike is determined. He knows it’s a risky move and that Tommy’s family will probably blame him and want nothing to do with him but he feels it is important to make the effort.

In the meantime, he’s taking some time out from his career to consider his future. He’s not sure he will ever be able to get back in the ring. But he’s also not sure if he can survive without the fight. His coach thinks it’s as necessary to him as breathing; that he needs an outlet for the “beast” within and Mike isn’t sure if he might not be right.

At the funeral, Mike meets Savannah and Rowan. Rowan, blaming Mike, is completely disinterested in anything Mike has to say and wants absolutely nothing to do with him. But Savannah sees something in Mike – a similar grief, a terrible remorse. She wants to give him a chance. So she has a coffee with him after the service.

It doesn’t happen straight away (that would have been very off) but, over time, Savannah and Mike begin a cautious friendship. Savannah sees in Mike a genuine guy who is caught up in a tragedy just like she is. She doesn’t blame Mike for what happened but equally, she doesn’t believe Rowan or her parents could ever accept Mike. So she knows pursuing a relationship with Mike is likely to only lead to heartbreak. However, as she gets to know Mike, she becomes more enamored. Mike is sure Savannah would be better off without him but she’s suddenly all that’s good in his life and he can’t bring himself to “do the right thing” and step back. I think you showed their conflict very well. Even as I was worried about how it could possibly work out, I absolutely understood why they were together.

I think there was one smallish reveal which was unnecessary. At first I thought it might have a greater significance but it didn’t turn out to make much difference (at least, to me). Had it been more significant, I would have thought it was a bit of a cop out but because it didn’t really change much I just thought it wasn’t needed at all. Of the two options, I prefer the one I got though. I wanted to see how things could work out without a deus ex machine type event.

In the end, it does work out for Savannah and Mike and how it works made sense and felt organic. I had been a little concerned that Savannah’s parents and Rowan might be shoe-horned into acceptance but that didn’t happen.

Savannah and Mike certainly scorch up the sheets once things get physical between them. I liked how you made their connection about more than sex though. It was clear more was going on than getting off.  I was confused about something during the first intimate scene though. Mike repeated “I stand corrected” a number of times and to be honest, every time he said it, I had no idea what he was standing corrected about. I read over it more than once but couldn’t make sense of it.

One of my Romancelandia friends, Dr. Jodi McAlister, is working on a theory about the erotics of talk in romance literature. She presented a paper on it at the Romance Writers of Australia convention in Adelaide, South Australia, last year. In that paper, she said:

Romance is a genre which is intimately engaged with a female politics of voice. It makes sense, then, that this search for an ideal listener might also be part of its textual politics, and part of its appeal.

And I couldn’t help but think of her when I read this in Raw Deal:

He watched her, listening intently. No one had ever listened to her the way he did. Like every word was a treasure to be examined and considered.

Mike shows Savannah that he is there for her, something that warmed my rescue-trope-loving heart. But, because I am a feminist as well as a lover of the rescue trope, I was happy to see that Savannah had some work to do to show Mike that things were not all one way, that she was there for him too.

It was a risky premise but Raw Deal delivered very well for me. Grade: B+