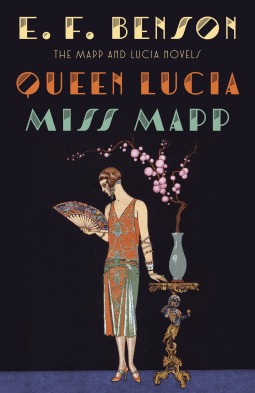 E. F. Benson’s beloved Mapp and Lucia novels are sparkling, classic comedies of manners set against the petty snobberies and competitive maneuverings of English village society in the 1920s and 1930s.

Benson’s series revolves around two unforgettable characters, both forceful and irrepressible women who dominate their respective villages in southern England and who will eventually end up hilariously at war with each other. Lucia is the more deadly of the two, with her pretentious tastes, treacherous charm, and lust for power. Miss Elizabeth Mapp, on the other hand, is younger and more forceful and able to terrify her opponents into submission. Benson introduces these splendid comic creations in the first two novels of the series, Queen Lucia (1920) and Miss Mapp (1922).

I had vaguely heard of these books and some screen adaptations before now but when I saw the entire six book series was being rereleased I dove at the chance to finally discover what the fuss is about. It took me about a chapter to get into the style – graceful, erudite, witty yet of a heft to which one must pay close attention – but the dry, slightly wicked humor had me laughing immediately. Be sure to have this Mapp & Lucia blog handy for references as Benson throws them in quick and fast. It also keeps all the Riseholme and Tilling dramatis personae straight.

What I didn’t know until starting, is that in the first two books, the two women don’t meet or interact at all. That comes later. Here, each is introduced in her own book and we get to see her in action by herself. And frankly either one would terrify me as they do most of the people in their respective villages.

First is “Queen Lucia.” Ah, the quiet, bucolic life in a small village in post Great War England. Well no, not hardly. This place is practically seething with social tension as its middle class subtly and not so subtly maneuvers and schemes in power plays. Rising above all of them, and up until now the undisputed, though not unrivaled, queen is Emmaline Lucas, aka La Lucia, aka Queen Lucia – and that’s pronounced the Italian way, cara mia.

Lucia is most firmly in charge of her little fiefdom and determinedly refined – or as intellectual and aspiringly intelligensic as is possible. Riseholme is almost like a reenactment village – an imperfect recreation where the inaccuracies are a sad concession to modern needs. I love the Ambermere Arms which does a thriving trade in “antiquities” to American tourists.

These are people with far too much time on their hands and too little to do in it regardless of how busy they think they are. But then “higher pursuits” are so tiring even if necessary to preserve and increase one’s refinement. One must remain unsullied by the mundane. Sniffing out “any news” is an art form here. Their days are chiefly filled by genteelly spying on each other and then scurrying around to have the thrill of stealing a march and being the first to spread their little nuggets of news to the rest.

“Then shall we consider that settled?” All of Georgie and Daisy Quantock’s brief thoughts of rebellion over the course of the story are soon squashed by Lucia’s faultless, almost military precision, hostile takeover. Lucia is a force of nature. She can overcome any revolutionary thoughts in her subjects. She’s like a sheepdog, herding her flock where she wishes them to go, leading and directing their conjecturing and inquiring in the gossip that is their daily bread. That is until a rival appears on scene.

Olga Bracely thinks they and their habits are adorable. She quickly cottons on to how things are done in Riseholme and who directs them all. She arrived thinking this was just a little backwater place where she could relax and renew herself in between her operatic performances but soon discovers the intricate dances of daily village life and finds herself fascinated by them all. She also is, unfortunately for Lucia, the one who all unknowingly exposes all Lucia’s pretensions and falsities.

I want a Foljambe, unflappable servant that she is. Even Tipsipoozie, evil snarling dog, doesn’t stand a chance against her much less her employer Georgie. Georgie’s two sisters are that particular brand of English womanhood – the stout, brash, loud, frightening women in tweeds who could rule the world and send weak men scurrying off, quivering. In fact, like they do to their brother.

This whole town does nothing but gossip and gab and exquisitely dissect each other’s business all day long. This is 1920s reality entertainment before the wireless. It is an age when not having your calling cards printed up and ready for use was a Major Faux Pas, as Lucia is quick to think of a new addition to Riseholme. It might be a backwater but it’s Lucia’s kingdom and watching her run it like a well oiled machine is a delight. B+

“Miss Mapp” is the second of the six books in the series and takes us to coastal Tilling where Elizabeth Mapp knows everything about everyone and what she doesn’t know for sure, she can usually deduce faster than a Cray computer. Seriously, if they’d had her in the OSS, no German spy would have stood a chance.

Elizabeth Mapp, or “Old Mappy” as two of her neighbors call her during their whisky drinking evenings, has got to be the nosiest woman I’ve ever read about. She keeps tabs on everyone, including her servants, from the bow window of her “garden room” which just so happens to conveniently allow her a view of not only Major Flint and Captain Puffin, those daily golfing and nightly drinking buddies, but all that occurs on the high street of Tilling. And if she can’t get a good enough angle, then there’s the daily shopping, with large basket, to keep her, and the rest of Tilling, abreast of the news.

Yes, as in Riseholme, keeping tabs on who is doing what with whom and who knows what when is a full time job. Every action, reaction and possibility is talked about endlessly. But while Lucia is like a swan towing the town cygnets in her wake, in Tilling they’re more like geese hissing at each other, aware of every social nuance and nicety. This is small town living at its worst with its rampant speculation and all snipping and sniping.

Miss Mapp is slightly meaner at attempting her social preeminence but since she is so often caught out or slips and thus reveals her hand, we can read along in delicious anticipation. Frocks, gardens, stored tins of food, filched glasses of whisky and who gets a dinner invitation first are all ammunition in their daily battles.

The humor is very dry and you’re almost zapped by it before you even realize it’s about to zing you. Benson magnificently sets up each episode then smoothly delivers the punchline with a neat knife twist. However be aware that Benson also adores long sentences, stuffed with as many commas as he can manage. B

“Oh, it’s all so delicious!” she said. “I never knew before how terribly interesting little things were. It’s all wildly exciting, and there are fifty things going on just as exciting. Is it all of you who take such a tremendous interest in them that makes them so absorbing, or is it that they are absorbing in themselves, and ordinary dull people, not Riseholmites, don’t see how exciting they are? Tommy Luton’s measles: the Quantocks’ secret: Elizabeth’s lover! And to think that I believed I was coming to a backwater.”