Eating disorders are on the rise for teenagers, and they are one hell of a subject to write about.   They are vast and difficult to understand, and are met with mixtures of sympathy and scorn.   Problem novels that deal with subjects like this are becoming more and more common, and I was eager to see how Purge stacked up to the rest of them. 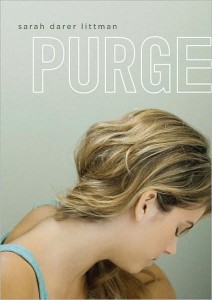 Being the newest Barfer at Golden Slopes is not fun.   Janie Ryman doesn’t like puking her food out, anyway, but she just couldn’t help it.   Now she’s stuck in a reform home with other Barfers (bulemics), Starvers (anorexics), and generally crazy people.   For the next few weeks, or however long it takes her to solve her issues, she’s stuck there, even being watched while going to the toilet to prevent any unnecessary puking.

The other Barfers, Callie and Melissa, aka Missy, aren’t too happy to have her there.   As long as she’s on time for lunch – because unlike the Starvers, they like to eat – they won’t mess with her.   The Starvers don’t care much either, led by the Queen of Lean Helen, who’s been at Golden Slopes longer than anyone.   Janie’s confinement is looking worse and worse by the second.   They’re monitored every second by someone like Nurse Joe, and there’s just no way that she can sneak off and puke.

When a new Starver–this one a male–comes to the Slopes, things get even more interesting.   He’s quiet, and Janie doesn’t feel even remotely attracted to him, but there’s an odd feeling that comes with having a guy join the group.   Especially one with parental problems almost as bad as hers.   Royce, a wrestling jock who can’t seem to accept that he is a Starver himself, joins soon after.   The Starvers and Barfers are connected by their common goal to get skinny and do pretty much anything to get there.

They work together in group sessions, and as Janie’s story unravels, we are given a look into the life of someone with an eating disorder.   The simplest things with eating are hard enough, but when the residents of Golden Slopes begin to examine what their lives were like before they began barfing or starving, they realize there is far more to their lives than wanting to be skinny.

What you capture with this look into the lives of people with these problems is just how real and how devastating an eating disorder is.   Janie is a character that has to go through everything to pass through denial and become a strong person.   Her journal entries that start each chapter are really eye-opening in terms of how she feels.   The stark contrast between those entries and the third person narrative really show the reader your ability to move between voices, as well as how a character’s thoughts aren’t the same in third person.   It really brought Janie out as a character.

The escape from her denial and her eventual journey into how she got into being a Barfer was really fascinating.   While most YA novels have absentee parents, Janie has her parents frequently visit.   They are actually a vital part of her recovery.   I can’t help but think this would be a hard, but important novel for parents to read.   Janie, as well as the other members of Golden Slopes, all have problems at home in one way or another that led them to their mess.   Janie felt like her father didn’t love her enough, Tom felt like his dad wouldn’t love him because he did things considered ‘girly’, and Helen’s parents just abandon her at the center for weeks on end without contact.   From seemingly small actions to huge missteps, Purge really shows that caring for a teenager is a sensitive subject that can easily be bruised.

Janie, as a whole, worked really well for me, and the secondary characters were really dynamic in themselves.   I love the extremity that Helen represents, and the calm, collected personae that Tom radiates.   Each and every member of the Golden Slopes Barfers and Starvers club affects her journey in some way.   I especially like the way you treat Tom’s homosexuality.   Being a gay teenager is hard, and a lot of them have parents like Tom’s father that would push them into doing sports or something in the hopes of making them straight.   Making him such a strong and stable character that shows quick psychological recovery is a great thing that sends a good message to teenage and adult readers alike.

However, with all of these great side characters, I couldn’t help feeling like some of them were left off.   For instance, really late in the novel, one of the Barfers is discovered to self-inflict pain.   That doesn’t really go anywhere.   Also, a tragic event that happens to another character about midway through the novel isn’t really reflected on much by the other characters.   There were many instances where I felt like it could have been expanded upon simply because there was so much there.

Another issue I had was the lack of mention of the generally crazy members of Golden Slopes.   There was a great opportunity to have some moving characterization and expand the breadth of the novel to psychological disorders in general, at least for a secondary theme, but it wasn’t really explored.   I would have liked to see it happen.

Purge is one of those novels that really stands out as being serious.   It’s framed by a group of characters and an underlying psychology that shows the depth and horror that is being a Barfer or a Starver.   While it misses it’s chance in some places, it’s a great novel about eating disorders that will resonate with adult and teenage readers alike.   B+

There is no ebook format.