By now I’m sure you’ve heard the accolades from other review sites of how this title might herald The Return to Great Historicals of yesteryear. How it takes a Victorian setting plus two well thought out lead characters and mixes them to yield a scrumptious book for those of us tired of yet one more Regency set historical much less those who’ve given up on historicals at all. True, it’s flush with Dukes or near Dukes but I’ll forgive you those since you don’t inflict a nobleman spy on me. I’ll allow much authors who resist that worn out and threadbare plot. 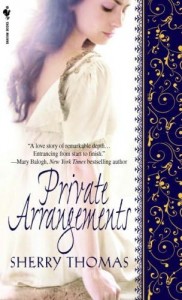 Gigi and Camden are not perfect people. Far from them. Gigi is almost breathtaking in her pursuit of a man she, in her budding youth, feels is the perfect man for her. One Duke has slipped through her fingers at the last minute by slipping off a four story building after a night of drinking. She’s not about to let his cousin do the same. Much less when he’s so wonderful a man. His long-standing bespoken arrangement with a spineless young European aristocrat is too tepid to be allowed and an obstacle she quickly removes.

Camden is sucked into the intense allure of a woman not thought to be beautiful yet breathtaking to him anyway. Her concentration on him, her delighted responses to his courtship started once he recovers from the brief shock of learning his betrothed has married another, her obviously barely banked sensuous nature are heady nectar to him. Which makes the revelation of her scheming plan all the more cutting to him. Rage crystallizes into a cold hearted revenge taken the day after their wedding night.

After ten years of separation and several affairs on both sides, they’ve settled into a two continent marriage that suits them both. White hot anger has banked into cool disdain as each proceeds to get on with life. That is until Gigi decides to petition for divorce and Camden arrives back in England to make life hell for her with a private arrangement before he’ll agree to her request.

I don’t do cartwheels of rapture over prose but must agree with Janine that the descriptions, word choice and writing style of “Private Arrangements” are among the best I’ve seen in quite a while. Even tone deaf readers will probably enjoy reading this book. Historical fans will like the use of anything-other-than-a-Regency setting. It seems that Victorian set books are tentatively on their way to becoming the new venue of choice. I hope they don’t overwhelm the market place and become blase. I did think that while the setting is well done, there were few elements that really nailed the book down to any certain year. Perhaps that’s just because the last quarter of the 19th century seems fairly generic with the exception of the new divorce laws and automobiles.

I mentioned that Gigi and Camden are flawed but don’t get me wrong, I liked that. It allows them to grow and mature into people who can finally appreciate the other for everything and all that they are. It’s something that they couldn’t have done when they married and doubtfully done at points throughout their separation. Camden had to finally admit that Gigi was right about the fact that he and his betrothed weren’t suited and she had to understand on a visceral level that what she did was wrong.

So, why the B+ grade after paragraphs of praise? The final separation between Gigi and Camden along with the reasons Gigi gives that set it in motion seemed ‘off’ to me. Here are two people who finally seem to be communicating honestly with each other, to have worked out their differences, to be headed towards that final blissful clinch and she brings out what I can only think of as a tepid, lukewarm barrier that doesn’t match her take-no-prisoners approach to life. It comes off as a contrived plot device and is jarring when placed against the rest of the story.

I didn’t let this one disappointment ruin my overall feelings for the book. There is so much to enjoy about the whole that I look back on my reading experience with a great deal of pleasure and am anticipating what you’ll offer us next. B+