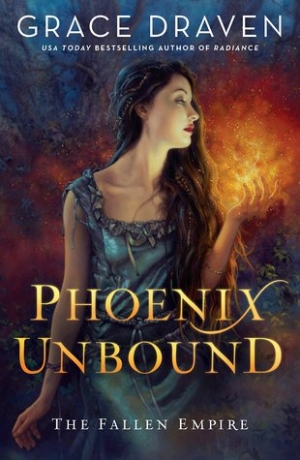 I was so excited you had a new fantasy romance book coming out (and the start of a series too!). I pre-ordered it and have been waiting desperately to read it ever since I did so.

Phoenix Unbound is the first book in a trilogy which, if I’m reading the information on your website correctly, will feature a different romantic pairing in each book.

Our awesome heroine is Gilene of Beroe. She is magically gifted – or cursed, depending on one’s point of view. She can call up fire and can disguise herself through illusion. Each generation, seemingly at random and not a result of inheritance, a young girl is “blessed” with this magical gift. Each year, towns throughout the Empire are forced to sacrifice a woman of the village to be a “Flower of Spring”. They are bound and taken via forced march to the Empire’s capital at Kraelag. There, they are offered to the gladiators as a reward for their fighting on one night and the next morning they are burned together on a pyre in a ritual sacrifice. Gilene’s lot in life is to don a magical disguise every year and be the sacrifice for the village. She endures the march, the rape and then the pyre. Her abilities mean that she does not burn and she can reduce the pain of the other women by making the fire very hot so that death for them is instantaneous at least. She escapes every year, paying a physical price in pain and scarring as the cost of her “gift”. Her value to the village of Beroe is in her gifts. Her value to her family it to protect them from the town’s wrath which will surely fall on them if she fails. She is a tool used to save other Beroe girls but not valued for herself.

Azarion of the Savatar people is an enslaved gladiator, forced to fight for the Empire in it’s arenas for the previous decade. He, for reasons which were never made clear, can see through Gilene’s illusion magic and recognises her from the year before. He is desperate to escape and return to the Sky Below, his homeland. There, he plans to seek justice and vengeance against his cousin, the one who arranged for him to be sold to the Empire in order to stop Azarion taking his rightful place as chieftain of the Kestrel Clan. In Gilene, he sees his opportunity.

Azarion, because of his good looks and gladiatorial skill, has drawn the attention of the Empress, Dalvila and has been raped and tortured and beaten by her and for her regularly during his enslavement. The most graphic depiction of this kind of event in the novel happens to him. It didn’t make it easier to read but I guess it also represented a change from the usual of sexual assault being shown as against a woman.

It is implicit that Gilene has been raped. The book begins at the beginning of her fifth time as a Flower of Spring. What detail there is about it is late in the book and it is pretty scant – which is fine. There was plenty for me to get the idea. I didn’t need more.

In the circumstances, my question right from the start was whether Azarion had ever raped a Flower of Spring. It took a very long time for the story to explicitly answer the question. Because it was important to me to know and I figure I’m probably not alone, I’m going to answer that question for readers right now.

“Why have you never used me? Without my magic to defend myself, I couldn’t stop you.”

“Because I know what it is to be used. By one. By many. The empress likes an audience when she plays with her toys, and sometimes she likes the audience to participate.” When had his voice become so hoarse? His throat so tight? “The worst injuries I ever suffered—those that almost killed me—weren’t earned in the Pit but in Dalvila’s bedchamber. I might not have been able to help a Flower of Spring escape the fire when I was a gladiator, but I never made them, or any woman, suffer rape. I never have. I never will.”

Azarion is not a rapist. He does, however, force Gilene to help him via threat of exposure and then, he abducts her; her powers will (because of reasons explained in the story) assist him take his rightful place with the Savatar. Gilene and Azarion are not friends at first. Not for a long time.

In many ways, Gilene exchanges one form of enslavement for another. Azarion comes to realise the full import of what he has done but as much as he has regret about it, he would not act differently had he a do-over. He was a slave and he took what opportunity he could to be free – even if the cost of that freedom was Gilene’s own. In some respects the story was a little reminiscent of A Promise of Fire by Amanda Bouchet but I think Phoenix Unbound was much more nuanced and far superior. The story doesn’t shy away from Azarion’s actions and does not attempt to gloss over them. However, it also shows he is a man of honour, tarnished though it was by his enslavement and, he keeps his promises. He promises Gilene he will return her to Beroe. Eventually, Gilene comes to believe it.  Slowly, very slowly, Gilene stops thinking of him as captor and starts to see him as friend – and then more.

But Gilene is bound to Beroe. Without her, another villager, very likely her sister, will be sacrificed next spring. She has to be back by then to fulfill her own obligations.

In the Sky Below (aka the Stara Dragana), for the first time in her life, Gilene sees another life. A life where she is not an annual sacrifice. Where she is valued and cared for as a person. Azarion admires her from the beginning. Gilene is described as “ordinary” – neither ugly nor pretty. But to Azarion she is beautiful – all of her, including her scars. He finds her physically appealing but mostly her beauty is from her character, from who she is. Azarion wants Gilene to stay with him because he loves her but he also wants her to stop sacrificing herself for Beroe. He sees Beroe as cowardly; of enslaving Gilene in a different way. He’s not wrong there. While the text has some sympathy for the denizens of Beroe and why they do what they do, it does not let them off the hook for their actions either. The narrative canvasses many types of slavery. Ultimately, Phoenix Unbound is a story about a fight for freedom on many levels.

The romance is delightful. A slow burn with, for me at least, no complications from the disparity in their power dynamic by the time they admit to one another they have feelings, by the time it gets physical. I had some qualms about this in A Promise of Fire. There were none for me here.

The ending of the book left me a little nonplussed however. There is a definite and satisfying HEA but the step in between the grand battle and that happy ending went in a direction I did not expect and which didn’t really make sense to me. It wasn’t terrible; I just wondered why it was there.

I liked Azarion very much but for me, the star of the show was Gilene. And, as I said on Twitter the other day, the book was also somewhat cathartic in a “burn it with fire” kind of way. I took particular pleasure in it as I read the book around the same time as Dr. Christine Blasey Ford gave evidence to the Senate Judiciary Committee.

I have a feeling I know who might be the next heroine and I am so here for it. It’s probably ungracious to already be impatient for the next book in the series though, isn’t it?