I heard with regret that your Petit Morts series is drawing to a close; although I was late to the party, I have enjoyed these stories very much, and I’m sad to see them end.  Short stories are difficult to write and although short fiction is plentiful in the m/m romance genre, I frequently find it unsatisfying and I tend to avoid it. This series was a marked exception to that rule. In anticipation of the final installments of Petit Morts, I thought I’d review the previous set, which are written by three of the four authors in the upcoming volume. 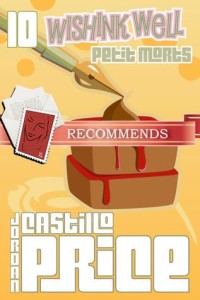 The inaugural five installments of Petit Morts featured stories by Jordan Castillo Price and Josh Lanyon, and the second set contains two stories each by these authors and adds a fifth by Sean Kennedy. The stories are largely independent of each other, but they are linked through a recurring character, Chance. Chance is a chocolatier and facilitator of romance. In each story he opens a chocolate shop and helps the main character find his romantic partner. The stories are all set in the present, and Chance is the only supernatural element in them (at least I think he’s supernatural, and at this point in the series everyone and everything other than the chocolates are mortal and normal). The stories share a common tone, balancing serious issues with lightheartedness, but they also reflect the individual authorial sensibilities of their writers.

Pretty Ugly (PM #6) by Jordan Castillo Price. Dominic is a professional photographer who is very good at his job but rarely has personal relationships that last more than an evening or two. He attributes this to his ugly face, and now, in his early forties, he has come to terms with it. While photographing a society event he makes the acquaintance of a young and handsome country singer who seems to return his interest, but they are unable to get together that night. They make plans for the following evening, but in the meantime Dominic eats a delicious chocolate, photographs another event, gets his car stolen, and encounters an even more unexpected romantic possibility. The writing is smooth and Dominic’s character is well drawn. The shift in romantic focus threw me a bit, but the ending was unexpected and satisfying. Grade: B.

Sort of Stranger Than Fiction (PM #7) by Josh Lanyon. A stranger comes to a tiny western town, this time in the guise of a war veteran named Michael. Ethan, who runs a bookstore/coffee shop with his twin sister, has been crushing on the gorgeous but scarred Michael since he arrived, but figures he has no chance. But when Ethan says something unforgivably rude and Michael overhears him, it shatters their previous impersonal relationship and allows them to be honest. Lanyon’s skill at conveying depth and complexity in a small package is evident in this story. He takes gentle digs at writers’ groups and small-town life, but he also reminds us that there are people everywhere who dream of having something different, something that takes them out of their everyday lives. Michael remains enigmatic, and his attraction to Ethan was not fully apparent to me, but the twists and turns kept me turning the pages. Grade: B

One Less Stiff At the Funeral (PM#8) by Sean Kennedy. Jason Harvey is trying to arrange his first service as a director at the Newlin Funeral Parlor, and Adele Conway is doing nothing to make it easy. Rivaling her late mother in rudeness and general misanthropy, she insists that there be chocolates at the funeral, claiming it was one of her mother’s last wishes. When Adele throws up her hands and turns over the funeral planning to her nephew, Frederick, Jason first heaves a sigh of relief and then perks up considerably when he comes face-to-face with Fred. Few authors can fuse sweet, funny, and charming in a story as well as Kennedy, and this short really shows off his voice. Chance and his magical chocolates play a more central and overt role, and his other-wordliness is at the forefront, as is his wit and snark. Grade: B+

Critic’s Choice (PM #9) by Josh Lanyon. This story returns to one of Lanyon’s familiar contexts: the Los Angeles of the cinema industry. Cris, a film critic and historian, is unwillingly reunted with his ex, Rey, when they meet to tape a voiceover commentary for a newly remastered edition of a horror film classic. They convene at the home of its star, the 70-something Angelo Faust. His sprawling Italianate estate is located above Sunset Boulevard (Gloria Swanson fans, take note) and guarded by a cadaverous major domo named Neat who is given to malapropisms. When car trouble, weather, and other occurrences right out of a horror film trap Cris and Rey together in Faust’s mansion, they find themselves finally talking about the individual and shared problems that drove them apart. The juxtaposition of light and clever with poignant and serious is ever-present and expertly handled. Grade: B+

Wishink Well (PM #10) by Jordan Castillo Price. This story opens from Chance’s perspective, but he isn’t opening a gourmet chocolate shop in a new town. Instead, Sweets to the Sweet is now a vending machine restocking service, and his client is Hospice House. Chance is wondering how he is supposed to facilitate true love in this environment when Eddie and his wheeled IV stand show up to buy a Pepsi. Eddie has terminal COPD, and he isn’t expecting much at Hospice House besides morphine, but he can still appreciate a gorgeous specimen like Chance. After their brief meeting, he finds that he is in possession of Chance’s fountain pen, which has properties even more magical than chocolate. Unlike the four previous stories, in which the heat level can be characterized as moderate, this features a long, explicit, and wholly essential sex scene. To describe it would be to spoil it. Under no circumstances should readers start with this installment, because part of its power derives from the way it plays on earlier portraits of Chance. The story is by turns funny, painful, and extremely moving. The writing is first-rate, and when I reached the end I turned right back to to the first page. A lovely, unusual story. Grade: A.