REVIEW: Opening Up by Lauren Dane 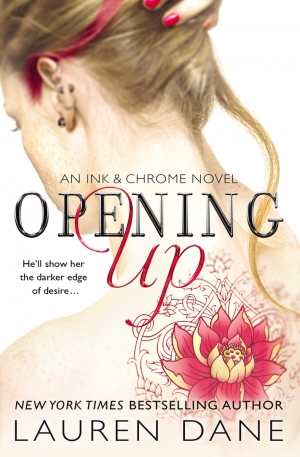 When I heard you’d be writing a series about a custom design car shop, I knew immediately I’d be reading it. Your books generally work very well for me, as they tend to derive their conflict from relationships, as opposed to outside forces. I love that your characters act like grown-ups and build their relationship based on communication and mutual respect.

PJ Coleman is a black sheep. She is the youngest member of a family dynasty, Coleman Tires. The business is very successful, and PJ does her part as a VP of Sales, but that is not where her heart lies. She is an artist. What she wants to do is a create a custom paint business for vehicles. She meets Asa Barrons at a car show and their chemistry is instantaneous. But Asa thinks PJ is way too young for him and avoids her. PJ would like to gain exposure as a custom paint artist through Asa’s shop, Twisted Steel, which is well known as the best in the business. She offers to come by to show Asa some samples, and he agrees, but then never follows up.

Asa is flummoxed by his attraction to the “much younger” PJ. He believes that he’s too old for her and that they would, in no way, be compatible. But he can’t fight both his overwhelming attraction to her. He holds PJ at arms length right up until he sees another man flirting with her and realizes that he needs her in his life. To PJ’s credit, she calls him immediately on that nonsense, and makes him work a little to get back into her good graces. Asa is a full-on alpha male, and a Dominant to boot. He’s delighted to find that PJ is more than willing to be sexually adventurous with him and discovers that she loves the Dom/sub sex that she and Asa engage in.

The story features a very strong family story line, one that enhances the story, highlighting the growing relationship between Asa and PJ as she deals with her ongoing family drama. It’s definitely one of your quieter stories, but one I found emotionally resonant. As I’ve come to expect, your characters act like grown-ups. There are no big misunderstandings here. Your couples talk, and relate, and are deeply honest with each other, and call each other out on their bullshit. It’s what makes your love stories work so well for me, but it also may be what might draw other readers away from your work. I found Asa and PJ’s story to be beautiful. They had a sweetness together that I loved, and their chemistry was fantastic. While I don’t think this type of story will work for every romance reader, if a reader is seeking a grown up romance with deeply likable characters and incendiary love scenes, Opening Up fits the bill perfectly. Final grade: B+.