REVIEW: One Scream Away by Kate Brady 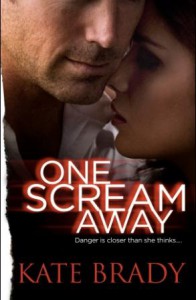 Who ever is doing the acquisitions over at Grand Central of romantic suspense has brought another wonderful debut author. Grand Central is the home to Karen Rose, Annie Solomon, Marliss Melton, Susan Crandall, and now, Kate Brady. One Scream Away is a gripping romantic suspense, probably heavier on the suspense but the romance was quite strong.

I read all night with my heart in my throat. I recall even checking the length of the book to see how much was left because I did not think more bad things could happen to these people.

The bad guy is a very smart serial killer who has a specific plan he is going to carry out. He is one step ahead of the huge task force that is comprised of competent people who are working on few clues. One of those clues is Beth Denison. Beth has spent the past seven years with a secret and she is prepared to take that to her grave to protect her young daughter.

Neil Sheridan worked a case seven years ago, hunting down a serial killer of young women. He ultimately caught the man and ended up shooting the suspect in a chase. His preoccupation with catching the serial killer ruined his personal life and he walked away from the FBI. A murder happens that could have been done by the previous serial killer brings a police lieutenant to Sheridan’s door. He is asked to consult on the case because he knew the former serial killer better than anyone.

The FBI trace the phone calls from the serial killer to Beth and Neil is convinced that she knows something, but he is not sure what. Beth is a target for the FBI and the serial killer. Neil is starting to fall for her. Beth wants to lean on Neil but is afraid to let go.

There’s an underlying thread of family and the importance of children to their parents. There’s the overaching theme of trust. Neil needs Beth to trust him like others didn’t in the past and Beth believes she can only rely on herself. I liked that both characters made emotional sacrifices without the guarantee that the other would reciprocate because they loved each other and were willing to take a risk.

The suspense is centered around a vendetta the serial killer has against Beth. He is marking his way from Seattle to Arlington, Virginia, by killing women a long the way. After each kill, the killer calls Beth to share with her that she better get ready for him. Beth recognizes that this might be the end for her. She doesn’t entirely trust law enforcement but may have to be able to keep her daughter safe. I didn’t feel Beth ever acted too stupid to live even though she acted without law enforcement from time to time. Her actions were understandable.

The reader is allowed to see the villain do his work as he comes closer and closer to Beth on the East Coast. You see law enforcement fail time and again, outsmarted by the villain. There is no character that is safe from the villain.

The suspense is the stronger part of this book, but the romance was well integrated. Readers will find common elements in this book with other romantic suspenses and might even see the plot twists, but it was fast paced and, dare I say, a bit scary? I will say I was uncertain about whether the ending was gratuitous. Still, I’ll be the first in line for the sequel.