REVIEW: One Night With the Sexiest Man Alive by Ainslie Paton 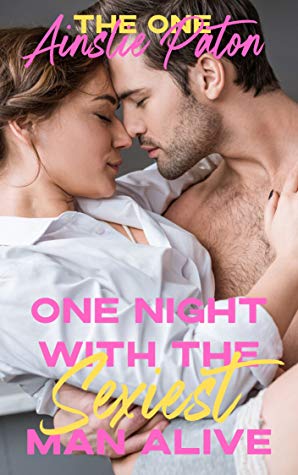 Standard Disclaimer: I’m friendly with the author online, we talk often on Twitter, and I’ve met her a few times. She’s the kind of author who wouldn’t stop speaking to me if I didn’t like her books and I’m comfortable giving my honest opinion (else I wouldn’t review her work) but, it’s something DA readers might throw into the mix when considering the review below. ~ Kaetrin

This little book happened to drop in my lap just when I had some space in my review schedule and as it was on the shorter side (clocking in at around 170 pages on my reader) I found it filled that space really well. It was clearly serendipity.

One Night With the Sexiest Man Alive has been advertised as tropetastic but as usual, you’ve put your own particular spin on it. Yes, it’s a bit of a Cinderella story but in this fairy tale, Cinderella is a successful businesswoman and not scrubbing grates or being mistreated by evil stepsisters.  Sydney-based Teela Carpenter has an event/conference planning business and is well on the way to professional acclaim. She’s planning her next expansion and thinking about how to diversify to ensure longevity in a fickle business. There’s a jerk ex-fiance who didn’t like that she worked hard and didn’t just hang around looking after him (who needs a guy like that anyway? she asks and I have to agree) but she’s not particularly lonely or unhappy. She’s busy, successful, has good friends and enjoys her life.

She wasn’t a weak knees kind of person. She was what other people described as a go-getter if they liked her, a ball-breaker if they didn’t.

And then she meets the actor who has been dubbed a certain magazine’s “Sexiest Man Alive” for the past five years running. Haydn Delany is a famous American actor – I envisioned him as something of a cross between Chris Evans and Chris Pine with a smattering of Hugh Jackman and Chris Hemsworth thrown in, but he is explicitly not any of those actors – who is passionate about social justice and human rights. He is spear-heading a project to fund satellite time to protect aid convoys in Africa and is in Sydney to try and sweet talk rich people into making very large donations. He’s the guest of honour at the conference Teela has just arranged.  Teela is disappointed that she will not actually get to meet Haydn because she’s had to do the professional thing and give up her seat at the banquet because reasons.

To her delighted surprise however, she has an encounter with Haydn on the balcony when he slips out of the banquet for a moment to himself. Haydn, for his part, finds that he doesn’t mind Teela destroying his bid for alone time. Not even a little bit.  Still, it’s a bit of banter and a story Teela can tell her friends. It’s only later when drenched after a rainy car catastrophe that a long black limo pulls up and the man himself invites her in for a ride wherever she wants to go that things get interesting.

I don’t usually regard myself as a reader who regards the heroine as a placeholder but I admit I struggled just a little bit with Teela’s confidence to just go for it with Haydn. I mean, I liked it. I just didn’t quite believe it could really happen. Haydn finds Teela extraordinarily sexy and appealing. At one point he’s watching her try on clothes (hers having been ruined by the rain) and there’s a description of her:

He liked her body, not model, starlet starved, a real woman’s body, with padded hips and a belly, with the subtle dimples of cellulite…

which, on the one hand, yay for authenticity but on the other, this is a man used to seeing women with no cellulite and no belly pooch. Perhaps it says more about my own body issues than anything but I found it a little difficult to imagine being comfortable getting naked in front of someone with the hotness quotient of a Hemsworth/Jackman/Evans etc (even assuming I were 20 years younger).

Teela doesn’t really think about it though. She just goes for it. And good on her because you get it girl but I nonetheless had a bit of cognitive dissonance.

In any event, Teela and Hayden commence a very enthusiastic and energetic and creative sexathon over the next few days, interspersed with a little carefully managed (complete with disguises for Haydn) sight-seeing. Their consent-boner intimacy ranges from hot and sweaty

“How do I make you feel good?”

“Certainly not by talking me to death.” If he so much as breathed on her skin she might orgasm, but she couldn’t tell him that.

He shook his head, but he didn’t try to smother his smile. “Now, now, Teela. Use your words. I know you can. How the fuck do you want me to fuck you?”

“Thoroughly.” There, that was almost an instruction.

“Cute. Noted. Not an answer. I’m asking how to please you.”

More fascinating. “What makes you think you won’t?” And an excellent stall.

“Good sex is a negotiation. It’s about trust as much as it is about thrill and pleasure. I haven’t had time to win your trust, so I’m asking you to talk about your desires.”

to deeply intimate and each finds themselves with unexpected and mostly unwanted feelings for the other.

Haydn is based in the US and has a busy acting career. He’s up for an Oscar and lives life in the spotlight. Teela is dedicated to her business and does not want to be anyone’s arm candy. She does not want to move countries or give up her career or independence. She does not particularly want to deal with the paparazzi and all that goes with Haydn’s fame.  To add to that, Haydn is famous for declaring he will never marry and he doesn’t believe in romantic love. He’s even had a vasectomy because he doesn’t want children (and this is aligned to his feelings about long term commitment). So, even if they could work out the logistics, Teela can’t imagine a universe where she could be anything other than Haydn’s short-term fling. Why would she uproot her life for that – no matter how sexy he is?

I was actually so caught up in the dilemmas presented that for a while I, too, was convinced their problems were insurmountable. Of course,that’s not really the case but you had me going there for a while.

Toward the end of their long weekend together, the real world begins to intrude and here I felt the story lost a little momentum. Or, rather, the tonal shift was a little jarring.

I enjoyed though, how the story was wrapped up – even though I had a few questions about some of those pesky details. I hope Teela really likes dogs.

I had to laugh also at the not-so-subtle characterisation of Haydn’s BFF, “Rylan Rumble” who has a penchant for practical jokes. He sounded very familiar to me [insert winky face emoji here] Still, Hayden isn’t Wolverine. For one thing, he’s American.

Most of the story takes place over that long weekend. Teela and Haydn spend almost all of it together and the develop a deep intimacy beyond the physical which did have me believing in their HEA. I guess I’m an easy sell there anyway – I do love a Cinderella story. There’s a reason Pretty Woman is one of my favourite movies.

As for the grade, I’m hovering between a B and a B+ so, because I can, I decided to go with both.

“We’re going to get to it all, but after this round, the clothes go. I want my skin sliding over your skin and nothing but precaution and sweat between us.”