REVIEW: One Dance with a Duke by Tessa Dare 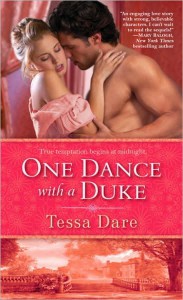 I've heard good things about you for the last year, ever since your debut The Goddess of the Hunt appeared as the beginning of three inter-connected novels. I've been meaning to read something of yours for quite sometime, in the same way I've been meaning to clean out my closet (this is a pleasurable activity for me) and go to the movies and call all my friends back. In short, I had to wait for summer vacation. So I was excited to review One Dance with a Duke, the beginning of your next trilogy of inter-connected novels.

Lady Amelia d'Orsay is a spinster and we find her, as we often find spinsters, at the edges of the ballroom waiting to be asked to dance, but not really expecting to be. Every evening just before midnight, the mysterious and taciturn Duke of Morland makes his appearance in the ballroom to choose from among that night's motley crew of debutantes, one young lady with which to dance the last set. He then escorts the starry-eyed gal into supper before he drifts back into the night. All this is done with hardly a word, leaving speculation and adoration in his wake. It is a sort of topsy-turvy Cinderella act that does not amuse Lady Amelia, who thinks it smacks of arrogance and pretension. He has, of course, never danced with her nor even looked in her direction. She expects nothing but more of the same at this particular ball.

That all changes thanks to Amelia's brother, Jack, a scapegrace of gargantuan proportions, who has lost a great deal of money to the aptly named "Duke of Midnight." Briarbank, the lone property left to the d'Orsay family, is now under the threat of Jack's gambling debt along with all of Amelia's well-intentioned plans to bring her family together for a healing summer of love-laden menus and wholesome activities. This is a situation that Amelia finds herself unable to tolerate. So intolerable in fact, that when the Duke of Morland deigns to show up at the stroke of midnight, she makes a mad dash across a crowded ballroom to accept the dance he was proffering to another young lady, all this in order to talk him into not calling in Jack's debt.

Spencer Dumarque, Duke of Morland is a man who likes his privacy, so much so that he only allots the ton a bare half-hour of his presence in any given ballroom. His main interests are horses, cards and books-‘none of which require the presence of another person with the possible exception of cards. His main goal at the moment is to get all ten tokens of the Stud Club (the most exclusive horse-breeding club in London) so that he might lay lone claim to breeding rights with the infamous stallion, Osiris-‘rights that only members of the Stud Club can access. The tokens can only be exchanged during games of chance, neither bought nor sold nor given away. As such, Spencer has been cutting a swath through London's gambling hells and has managed to gather up seven of the ten tokens. It was during one of these games that Spencer got Jack indebted to him to the tune of 400 pounds. Jack was mere collateral damage and not the real goal at all. Thus, you can imagine his surprise when Amelia takes the opportunity of their dance not to flirt or simper, but to pester him for the forgiveness of her brother's debts. Debts he has no real interest in. But when she asks him, he refuses saying that it isn't something he cares to do as debt will surely teach her n'er-do-well brother a lesson. My favorite part of this scene is when Amelia decides to explain to Morland just why she's decided to enjoy herself.

"Can I persuade you to stop staring at me?"
Her smile never faltered. "Oh, no."
Oh no, indeed.
"You see," she whispered in a husky tone, that from any other woman he would have interpreted as sensual overture, "it's not often a spinster like me has the opportunity to enjoy such a prime specimen of virility and vigor, and at such close proximity. Those piercing hazel eyes, and all that dark, curling hair . . . What a struggle it is, not to touch it."
He shushed her. "You're creating a scene."
"Oh, you created the scene," she murmured coyly. "I'm merely stealing it."
Would this waltz never end?
"Did you wish to change the subject?" she asked. "Perhaps we should speak of the theater."
"I don't go to the theater."
"Books, then, How about books?"
"Some other time," he ground out. And instantly wondered what possessed him to say that.

This little repartee on the ballroom floor is abruptly cut short when the Duke suffers from some strange attack of illness. Rather than explain, he simply carries Amelia off to the balcony with him, once again leaving scandal in his wake. It is here that the plot suddenly takes a dive into mystery. Out of the shadows of the garden, two of the remaining three members of the Stud Club appear. They are there to tell Morland that the third member and founder, Leopold Chatwick, Marquis of Harcliffe is dead after being attacked in one of the less savory parts of London. The two gentlemen, Mr. Bellamy of the dubious origins and Lord Ashworth of the grim countenance, have come to both inform Spencer of the death and to tell him that part of the code of the Stud Club is the care and protection of its members' dependents-‘a task they are on their way to perform in informing Leo's only sister, Lily of the death of her brother. Amelia, who has been there the whole time, interrupts what is sure to be a fight to insist that she accompany the three gentlemen. She had known Leo and Lily Chatwick quite well and wants to be there for Lily in her time of grief, a situation she feels some considerable sympathy for since she herself has experienced something similar when her brother, Hugh, died at Waterloo.

All this midnight adventure leads to infatuation. First, when Spencer accepts Amelia's handkerchief on the balcony, and later on the way to the Chatwick's home when he becomes suddenly aware of her body in the jostling carriage. He finds himself increasingly taken with Amelia-‘with her breasts, her sharp wit and her strange ability to make him chatty. Plus, he had taken the time to grope her thigh in the carriage, so he's pretty sure he fancies her by the time they reach her brother, the Earl of Beauvale's house the next morning. Impulsively, Spencer declares to the Earl that in all likelihood he has ruined Amelia's reputation, since an entire ballroom of people saw him carry her off and never come back. When he promptly proposes on the heels of this announcement, Amelia is more than a tad surprised. But she eventually says yes. Mostly, because of the way Spencer kisses.

The bulk of the novel is spent watching Spencer and Amelia get to know each other and discover their mutual passion. The obstacles to this union are many. Between Spencer's tendencies to manipulate everyone around him in order to achieve privacy and Amelia's sometimes extraordinarily irritating penchant for martyrdom, they have some trouble coming to an understanding of the person beneath the faÃ§ade. Add to that Jack's surprise appearances to beg for money, Spencer's petulant ward, Claudia's teenaged sulking, the shadow of Leo's murder and the mystery of Spencer's intense interest in the ownership of Osiris, and there are many things that conspire to keep them apart.

At 383 pages, this novel is longer than the standard paperback romance which I've concluded to be on average about 245 pages. The length is really a measure of the care and craft you take to establish the characters and their internal motivations. When we finally learn why Spencer has such an intense interest in Osiris, while it is surprising and unexpected, it is a motive that springs naturally from what we know of his character and concerns. A littler harder to take was Amelia's keen grip on her role as sacrificing mother-‘a role that was wearing thin with me by the end. I had a real problem with Amelia there in the last pages. She was just being so . . . ugh, self-sacrificing and totally irrational. I kind of wanted to smack her really, really hard. You see, she is a nurturer and fundamentally believes that with love and a little good food, she can reform rakes, turn enemies into friends, and mend hitherto broken hearts. I have a difficult time with this kind of naÃ¯veté both in life and in my books. Being too selfless is almost as bad as being too selfish. It is a kind of blindness, but one I don't tolerate nearly as well as others. At least you never had Amelia or anyone else describe her as practical, an adjective overly abused by authors when describing spinsters. Amelia is not practical as evidenced by her romantical actions, her long-suffering generosity, and near total blindness to her brother's character. But even in my annoyance I had to admit that her idiocy there at the end was part and parcel of her character and not something created by you just to keep the tension going a few pages longer. Like I said, Amelia's not practical. She's hospitable to a fault.

The mystery of the Stud Club, I'm assuming continues over the next two books-‘Twice Tempted by a Rogue and Three Nights with a Scoundrel, both set for release in the upcoming months-‘ for it was not resolved in this book. That's okay because you established early on that this story was a book more about the relationship between these two characters than it was a tense mystery of horses and murder-‘at least not as far as Spencer and Amelia are concerned. The revelations made in this book were unexpected, but they steered clear from the standard fare I often see in these sorts of plots. Do you remember that old board game, Crack the Case? Well, I do. I played it often enough with my sisters and my cousins in my younger days, to the point where we all learned that the secret to solving the harder cases was to think of the most absurd thing you can and then say that. It would invariably turn out to be the correct answer for any of the mysteries ("I know! Sheila's really a man!" or "The parrot did it!"). I appreciated that Spencer's reasons were not some dark, fathomless secret that no one could ever understand-‘boo hoo, Mr. Rochester's schizo wife and the sex slave trade or whatever equally heinous secret it might be that the well-versed reader can spot at a distance of nearly 50 miles. Thank you for not doing that to me. Sometimes people's secrets aren't really all that dark and gruesome.

Overall, One Dance with a Duke was a quick and entertaining read with well-drawn, three-dimensional characters and good, satisfying love scenes. It was a sweet romance, more light-hearted than I initially expected and carefully written in both its characters and its settings. B+