REVIEW: Once Upon a Winter’s Eve by Tessa Dare

In the usual way of things, I am not a fan of the novella. Neither am I quite keen on the short story. I find both lacking in character, particularly in romance where that is the key to any relationship development. Neither the novella nor the short story offers an adequate length for the development of either of those two central aspects, in my experience. Or it does so rarely enough that I have come to view the novella with leery and suspicious gazes, especial those that are offered up in between books in a series. 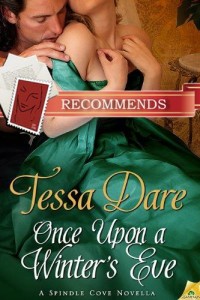 However, I do like spinsters. This is because I am one. Being, like most people, supremely interested in anything having to do with myself I will nearly always read a story that features spinsters. And you provide bucket loads of them—a whole town full of them! This sparked my interest enough to overcome my perfectly sensible dislike for the novella. My liking for spinsters outweighed my dislike of the medium in which they were conveyed and thus I decided to give Once Upon a Winter’s Eve a try.

Violet Winterbottom has suffered a disappointment. It was such a disappointment that it took on a definite article and a capital “D”. The Disappointment resulted in Violet fleeing the ton to Spindle’s Cove, aka Spinster’s Cove, where those young ladies of quality who are awkward, scandalous, or otherwise de trop amongst Society may go for reprieve. Unfortunately, Violet’s reprieve is at an end. Tomorrow she must climb aboard a carriage and join her family for Christmas and then the Season.  Her last night in town coincides with a Christmas ball which features young men from the militia to dance with and the usual sorts of entertainments provided at balls. But the usual stops when quite unexpectedly—as these things usually are—a disheveled and bloody man stumbles into the ballroom, lurches across the room only to collapse at Violet’s feet, all the while muttering in a foreign tongue.

The militia is absolutely thrilled! England is at war (isn’t it always?) and a foreigner washed up on Sussex shores can only signal something is afoot. However, he is not speaking French. Violet, a polyglot, identifies the language as Breton, which happens to be in France and thus indicates that the unconscious man now at Violet’s feet may be a spy.

He also may be something or someone else all together. Though he claims, quite insistently, that he is Corentin Morvan, a humble farmhand there is something rather familiar about his eyes. The nose is different, yet . . . Violet is unsure what to believe. After all, her suspicions are rather incredible. When Corentin comes around, he manages to convince Violet that he will only speak if they are alone. Wanting answers, Violet does just this and finds herself running about Spindle’s Cove with an outlaw in the dead of night as a result.

I couldn’t figure out how to talk about this novella without giving away the mystery, so the rest of this review is going to contain spoilers.

Corentin Morvan is, of course, The Disappointment, also known as Lord Christian Pierce, the man who plucked Violet’s virginity last year and then ran off the next day to the West Indies without a word.  At least, that’s the story as Violet has understood it. In truth, due to his adept ability with languages and a need to make some meaning out of his brother’s death, he has become a spy posing as Breton farmhand who passes information back and forth between more important players in the game.

He’s also terribly in love with Violet and could not bear to leave England without kissing her. Christian is perfectly aware that he behaved like a cad. He’s also perfectly aware that Violet has no reason to trust his declarations of love. After all, he cannot even explain how he came to love her without bringing up some other girl.

Dash it, Christian couldn’t recall precisely when he’d begun to feel this deep affection for the quiet, unassuming girl next door. He could name the day he’d grown aware of it, but he suspected that tale would have only increased her pique.

The story involved another woman.

And it took place in a ballroom, much like the one Violet marched him to right now. At one of his parents’ more scandalous masquerades, he’d been flirting with some demimonde—for no particular reason. She was a painted bulls-eye, and all the young men took a shot at her. And she’d said to Christian, with the smile of a practiced coquette, I shan’t waste my time with you. You’re a puppy. You’ll pant and slaver over me for a while, but then you’ll grow up and be faithful to a girl like her.

And she’d tipped her fan toward the corner occupied by Violet Winterbottom.

Christian had laughed long and loudly, dismissing the notion out of hand. But the notion, impertinent thing that it was, wouldn’t be dismissed. It clung to him, hovered around him like a puff of cheroot smoke as he went about his nights of revelry with friends. Eventually, he’d stopped staying out so late and started waking earlier to take the dogs for their morning run.

And to see Violet.

Because suddenly, he’d begun to truly see Violet. To appreciate what a clever, thoughtful woman she’d become. She had a real gift for languages—which he recognized, being quite handy with them himself. And she liked a challenge.

As for Violet, she isn’t at first entirely sure whether or not this man is The Disappointment. And when she becomes sure of his identity, she still is uncertain as to his feelings. After all, she gave away her virtue with nary a protest last year and look how her trust was rewarded. She isn’t inclined to make the same mistake twice.

One of the reasons that I think this novella is strong is because the hero and heroine have a history together. It is very difficult for me to believe that two people who have just barely met and for whom very little time has passed could possibly be truly in love let alone love each other. My god! The number of times I have met someone, had a few drinks with them and then became absolutely convinced that so-and-so was my new Bestie Forevah! is really too many times to count. The exact number of times that such an evening out has resulted in a BFF is exactly zero. Obviously, one cannot regard one incredible twenty-four period as a sign of anything but a moment. But this book avoids that pit fall, instead giving Violet and Christian a past in which they slowly came to know each other over conversations in which they learn about each other.  This makes the ensuing romance both more believable and more interesting. That is, the obstacles they must overcome are twofold: not blowing Christian’s cover and earning back Violet’s trust.

Speaking of Violet, what a very likable heroine! She’s clever and funny and full of self-doubt. She’s not pathetic, which can be a problem with spinsters in romance. Nor is she feisty, which can be a problem with heroines in general. I enjoyed the way she thought about her past. It was tinged with pain and humor simultaneously—as can be seen by her calling Christian, The Disappointment. In fact, it was the way Violet approached the problem of Christian that was the most likeable thing about her. When she wasn’t sure who he was, her thoughts reflected what I considered to be an intelligent amount of doubt, not only for her own senses and her own imagination, but also doubt of her doubt. That is, she consistently re-evaluated the situation, as unlikely as it was, as new information came in.

She rose and went to a table where the maids had laid out tea service. As she poured a fragrant, steaming cupful, her mind churned.

It didn’t explain the eerily familiar freckle beneath his left ear.

Violet. I would cross a world for you.

The memory sent a frisson chasing over her skin.

It was impossible, unthinkable. But the more she observed and spoke with the man, the more she felt certain he was The Disappointment.

She closed her eyes. Time to stop hiding from that name.

She felt certain he was Christian. There were differences, yes. But the similarities were so numerous, and her reaction to him so strong, she was starting to believe it must be him.

And yet—if he were Christian, what was he doing here, and not in the West Indies? Why would he bother to row into the cove, trudge across fields, and claim to be a Breton farmhand? He could have simply pulled up in the drive, knocked at the door, and said, “I’m Lord Christian Pierce, third son of the Duke of Winford.” It’s not as though he would have difficulty speaking to Violet, if he wished to. And he hadn’t wished to—not in almost a year.

Christian would not have crossed a world for her. He couldn’t even be bothered to cross the square and bid her a proper farewell.

As she stirred sugar into her tea, she stole another look at the dark, intriguing man lashed to a chair. Perhaps even he didn’t know who he was. Perhaps he was stark raving mad, or suffering from amnesia.

She let the spoon fall to the tray, exasperated with her mind’s wild contortions. “Truly, Violet,” she muttered to herself. “Amnesia?”

She returned to her chair, not knowing what to think, nor even what to hope.

Overall, I enjoyed this novella. It struck the right balance in the development of characters and relationship over the short period of time it was set (a night) and in the shorter medium of the novella. However, I do think that the latter half lost the friction and emotional tension that characterized the first parts. The latter scenes focused more on getting Christian back to his ship and figuring out what to do about their relationship than the emotional tension that such a history would leave in its wake. It felt a little uneven to me emotionally as a consequence. This, however, is a negligible complaint.

By giving Violet and Christian a past history together, what we see in this story is the final consummation (Har! Har!) or realization of that previous relationship. It is just the sort of story that is perfect to curl up with between wrapping presents and enduring visiting relations. B+