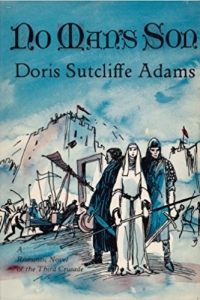 “This is the story of Rodriga de Perolles; of how she rescued the bastard renegade Marco from death and was rescued herself by the squire Piers; of how she joined with her father, the penniless and independent Sir Landry, in search for witnesses that would bring Piers his rightful inheritance; and of the perils the three men brought into her life.”

The story is set in 1192, the time of the Third Crusade. Rodriga is an independent, high-spirited and competent girl of seventeen who accompanies her father on all his campaigns. She can manage a horse, a dagger and her father’s household equally well. Marco is an outcast, but a man of courage and wit, and he makes himself Rodriga’s protecting shadow after she saves him.

Years ago I wrote a review of “Red Adam’s Lady,” and always meant to read more by this author (known both as Doris Sutcliffe Adams and Grace Ingram). Slowly I collected more of her books when I could find ones with prices that didn’t make me gasp. One still eludes me but perhaps some day … Anyway, I decided to start back with “No Man’s Son” for the simple reason that yes, dear readers, you can read it. “But where??” I hear you asking. “There’s no digital edition and used book prices are too dear.” Look to the Open Library. I’m sorry, the book has to be signed out by the hour but it is free.

The next objection I can see is that the book is set during the Third Crusade. Let me state that in this book no one, but especially Christians, really comes out of it looking good. Some people have true faith and believe in what they came to the Holy Land to do but that is regain the Holy Land by force. Marcus’s views initially shock Rodriga despite the fact that she is cynical about the leaders of the Christian Armies and how her fellow Christians at Acre are acting. Marcus hasn’t had good luck with people mouthing Christian virtues but acting anything but virtuous. So let’s be clear that “No Man’s Son” was not written to puff up anybody’s religious viewpoint.

The book is filled with faith: who pretends to have it, who says they have it, who really has it – and some people do. It plays a big role for one character in regards to who he believes in. Marcus has had no acceptance from most people and faith, or lack of it, has soured Marcus’s views of people – especially but not only Christians.

Our heroine Rodriga is tough – she’s already a strongly opinionated woman but having been raised in the tail of the army, following her father, she’s had to become independent and willing to act on her own. She loves excitement and adventure and is handy with a dagger, javelin, or bow and arrows. Who is gleeful about this and who is disdainful will show true worth of character. She kicks ass but not anachronistically so and the eyes of one character light up when she does.

Rodriga’s relationship with her irascible father is a joy. But he claims that she gets her independent spirit from her Moorish mother whom he saw in Spain then immediately fell in love with, married, and adored. Sir Landry is a man of his word even if his untameable tongue has done little more than to shoot him in the foot. He spares no one, including himself, but fiercely looks after those who are in his care and protection. Two people he takes on are a somewhat dim squire who acts like an oversized puppy but has the brains of a stupid mule and an outcast man who has never been accepted nor treated with kindness or decency his entire life.

There is a lot of violence in the story. It takes place in the waning days of the Siege of Acre but there’s also plenty of the dregs of humanity inflicting their will on the lesser, weaker, or poorer ones. One character immediately made me boo and hiss whenever he’s in a scene. Yet while there are some people whose villainy is telegraphed immediately and remains unchanging there are a few who must have an eye kept carefully on them to discern their true nobility.

The views on prostitutes and the terms used about and toward them are very much “of the times”  though Rodriga feels sympathy for them and anger at how women have to turn to this as their only viable means of support or that women are forced into it. There is an owner of a brothel who swears that his girls are not forced into the trade and who does Rodriga several good turns so I guess he’s a semi-good character. I must mention that in one scene at the brothel, an African dancer is described (not by any of the characters)in terms that are appalling even if Rodriga admires her dancing.

The change in views about Marcus aren’t immediate. At first everyone views him as vermin and even when Rodriga realizes that he’s tailing her to try and do some deed to pay her back for (very reluctantly) saving his life, she upbraids him. As the de Perolles household gets glimpses of his childhood and what has shaped him into the man he is – and sees how much worse he could have become except for his innate strength of character – we the reader can see how much horrible child abuse he must have suffered and how determined he was to dig himself out of the gutter. It was soon fairly clear to me who Rodriga would realize she loves but how would she, the daughter of a knight, end up with him?

As the book heads down the home stretch, the violence gets kicked up a notch though it’s not described in too grisly terms. It does seem realistic for the times and the temperaments of those involved. No sooner had I caught my breath from one event then I was being hurled headlong into another, and another. The way the final outcome is achieved makes use of the practicality and good sense of the hero and Rodriga. His joy in having gained the heart and love of this wonderful heroine is a delight. I can see them, bantering wittily, having each other’s backs and living the dream. B+