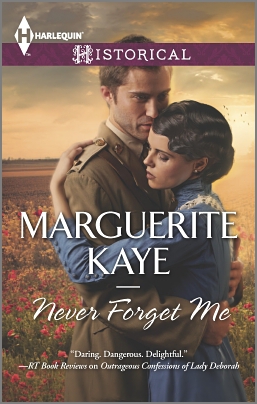 AS WAR BLAZES ACROSS EUROPE, THREE COUPLES FIND A LOVE THAT IS POWERFUL ENOUGH TO OVERCOME ALL THE ODDS…

As war looms, genteel Flora yearns to be more than just an observer. She finds a revolutionary kindred spirit in soldier Geraint—but will their fragile love be crushed before it can start to bloom?

Soldier Robbie cannot forget his one hedonistic night in Paris with beautiful waitress Sylvie. But as Europe burns, can these two star-crossed lovers ever be reunited?

Nurse Sheila is horrified to discover her new boss is the French surgeon she woke beside after Armistice Day! Fighting for their love will be the bravest thing she’s ever had to do….

After enjoying the two short time sequels that preceded the release of “Never Forget Me,” I knew I needed to check it out. I totally agree about how things changed after the war ended. But even if life changes were often for the better, I think some old world charm and courtly manners got left behind after 1918. Be that as it may, I was still looking forward to watching the beginning, middle and end of the war and how the characters would grow and develop with it.

I loved that Flora and Geraint quickly progress beyond their initial “hackles raised” meeting. They’re both blunt and honest, each says what they think and move past silly misunderstandings that would have lingered long past my tolerance point in a full length novel. This isn’t to say I didn’t enjoyed watching them intially butt heads and spar a little.

They very similar outlook on and problems in life even if they’re from “opposite sides of the fence.” He disappointed his father by leaving the Welsh coal mines, moving into a white collar job and thereby seeming to look down on how his father had supported their family. She has been raised to be a flower-arranging ornament wife after making a Good Marriage all the while never using her brain. I winced in sympathy that not only her parents think she’s incapable of anything else but her lifelong friend does too. Ouch.

The growing emotional aspect to their relationship shows in how each feels able to confide in the other and tell their hopes for the future. how each inspires the other to face facts head on and be willing to make changes

The physical side of the issue is shown both in a delicate node to the mores of the time but still the heat is felt. The times when Geraint calls a halt speaks to his manners and care for Flora and makes sense in an age when he doesn’t want to cause her any future difficulties in marriage or risk tying her to a man who might come back from the front as a shell of the person she married.

With time running out, I was about to shake Geraint for not being as brave about his feelings as Flora yet it’s her strength that calls to an answering emotion in him which wins the day. B

The second story begins two years into war and prewar conventions have been blown to hell. Take what you want and need when you can get is the order of the day – quite unlike the reality of life before the war. Even Robbie’s stiff necked mother has noticed the change and has changed a bit herself from the woman who didn’t want her daughter marrying a son of a Welsh coal miner.

Robbie is on leave in Paris when he meets his HEA though neither he nor Sylvie wants one. Both have 1,000 mile stares and sense a sameness of their feelings namely to grab at anything that may spark some relief, even for a small while. But both are afraid to feel again, to be willing to risk their emotions again, to begin to care for another person whom they might lose.

Good on her that Sylvie as much in control and in charge as Robbie during sex. Both feel awkward afterwards, are almost mystified by their loss of control and stunned by what happens. At this point, both also feel it was sex and not love.

The feelings of love begin later during their letters when they slowly start to open up and then reveal to each other things they’ve never told others. They feel that now their lives are divided into a “before each other” and an “after we met.” Their relationship progresses swiftly via post but again turns awkward when they finally meet again face to face.

But they’re not perfect together and disagree on the war and duty yet they talk and listen and open their minds to another POV. Gradually these two, who never thought of the future, begin to hope for one, to work towards one and dream of one together. It takes another lightning bolt of realization for them to be willing to risk it all but it all comes together and works for me. B+

Finally on to the third novella which is, sadly, a mess. It starts as well as the first two novellas. The war is finally over and celebrations are going full tilt. VAD Sheila meets a French officer. They dance, they feel a spark and both let down their guard for a hot encounter. Afterwards, an embarrassed Sheila hurries away before an equally befuddled Luc can gather himself together.

Months later in Scotland, Sheila is discouraged to discover that her nursing experience counts for little in post-war Britain though her former employers would be willing to take her back on as a domestic. But she’s seen some of the world and refuses to go back to that. Bully for Sheila, I thought. Her chance comes when the Carmichael family decides to turn their Scottish estate into a hospital helping the war wounded. If Sheila can impress the foreign doctor arriving to take over operations, her future could be brighter than being in service.

Of course we all know who will be arriving as the new doctor. As well, since the hospital is where Sheila used to work, many of the trustees see her as a “wee lass” or servant – or both. She has to impress everyone with her organizational skills and most of all not give them any reason to dismiss her. With all her hopes riding on how she acts and is perceived, it should be a no brainer for how Sheila should act. But it isn’t.

Basically Sheila Luc’s relationship boils down to a sex scene, followed by ‘we’re appalled at what we’ve done,” time lapse then repeat, rinse and repeat. I didn’t feel I saw these two fall in love so much as repeat bad judgments and actions then be horrified and dismayed before doing it all over again. He can’t commit to a relationship and she can’t risk having people think she’s sleeping her way to a position but they keep going against what they’re preaching to themselves without me ever seeing any changes in their circumstances that would lead me to think they’ve grown or learned. Then suddenly Sheila feels she’s in love and Luc thinks he’s in love and voila! it’s all solved. No, I didn’t see it and found it a sad let down end to the book. D

→ Jayne
Previous article: REVIEW: Caught! by JL Merrow
Next Post: Tuesday News: Changes at Ellora’s Cave, Pew research on libraries and reading, research on e-reading and cognition, and a tribute to women on bikes