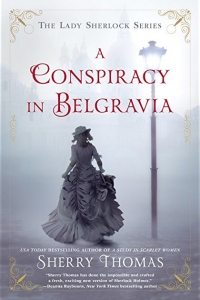 I read and reviewed the first book in your “Lady Sherlock” series, A Study in Scarlet Women, last year, and gave it a B-. In spite of the middling grade, I was definitely interested in reading this, the second book in the series.

The prologue opens with Inspector Treadles at the scene of a murder. Treadles is the police detective who relied on Holmes in the first book for help with his cases, before discovering to his dismay that Sherlock was actually Charlotte, and a notorious fallen woman to boot. He’s rather traditional in his views on gender roles and he hasn’t gotten over the shock of discovering that the brilliant mind he’d so esteemed belongs to a woman he regards as little better than a whore.

Treadles arrives at the murder scene looking forward to a nice, simple murder solved through old-fashioned detective work; it will provide a soothing contrast to the Sackville case of the first book, whose “taxing irregularities” introduced an unacceptable amount of uncertainty into Treadles’ well-ordered world. So he is disturbed when before he even enters the house where the dead body is lying, a hackney pulls up and out comes his friend Lord Ingram, with Charlotte Holmes herself in tow.

The action then switches to six days earlier, and a round-up of sorts of what the main characters are up to: Livia, Charlotte’s sister, is attempting to write a novel, a thrilling mystery featuring Sherlock Holmes; Charlotte herself, Mrs. Watson, and Mrs. Watson’s niece Penelope are seated around the breakfast table, discussing Sherlock Holmes and the perception of him in the public imagination; Inspector Treadles and his wife Alice are starting the day and also talking about Holmes (Alice admires “him”; Treadles, knowing the truth, is both put off and a bit jealous by Alice’s regard for Holmes).

It’s hard for me to give a very thorough accounting of the plot of A Conspiracy in Belgravia because, as with A Study in Scarlet Women, I found it confusing. The main story points are: Charlotte, in her Sherlock role, is contacted by Lord Ingram’s wife, seeking help finding her lost love (a man who happens to be Charlotte’s illegitimate brother). Livia finds herself encountering an intriguing stranger on several occasions while out and about. Lonely Livia is instantly smitten, but it’s unclear if the fellow has ulterior motives for seeking her out. Someone seems to be watching Mrs. Watson’s house. Lord Ingram’s brother has proposed marriage to Charlotte (though he seems more interested in access to her big juicy brain than romance). As a way of courting her, he gives her some mysteries to solve, including a cipher (this leads to a lot of business with ciphers, which I found extraordinarily confusing). Inspector Treadles is disturbed by his wife’s stirrings toward independence. And then there’s that dead body from the opening.

I was honest about finding the first book in the series confusing and difficult to follow, at least at times. A Conspiracy in Belgravia is no different. At the end, I kind-of-mostly-knew what had happened. But there were points I was fuzzy on and now, a few weeks later, I find it impossible to recreate exactly how some of the pieces fit together (at least from memory; I suppose I could re-read the last quarter of the book).

Surprisingly, perhaps, I would say that this doesn’t affect my enjoyment of the book (or the series so far) much. I really like the writing, characterization, and the world the author builds. I guess I blame myself for needing an explicit expository explanation of what the hell is going on at certain points, though I think I’m not the only one who had trouble with A Study in Scarlet Women. I actually appreciate that the author doesn’t indulge in infodumps or “…as you know, Jim”-type exposition. But I’d probably benefit from either or both, personally.

It doesn’t help that my memory of the first book is pretty muddled on some points – for instance, I don’t remember Moriarty even being introduced, but he’s mentioned here in a way that suggests that he *was* in the first book; also, there are two siblings that I vaguely remember from that book (one of whom makes several key appearances, but how he fit into the main plot is one of those things I can’t quite grasp).

I had hoped after reading A Study in Scarlet Women that the characters would be better developed going forward; Charlotte particularly felt a little unformed to me. Happily, Charlotte’s personality, and her relationships, were both refined in this book. Livia also grew and changed in A Conspiracy in Belgravia; in some ways I feel like Livia is a secondary heroine, relatable to the reader in a way that Charlotte isn’t capable of, given her emotional limitations. The secondary characters are all interesting and mostly sympathetic (Treadles’ chauvinism is unappealing but true to the time, and I did feel for him a little bit in his uncertainty and unease over his wife’s interest in pursuing her family’s business).

A Conspiracy in Belgravia was a B+ for me. I’m eagerly awaiting the next book in the series.

→ Jennie
Previous article: JOINT REVIEW: Someone to Wed by Mary Balogh
Next Post: REVIEW: The Love Experiment by Ainslie Paton