You are another author whose books have caught my eye, but I haven’t managed to pick up. I’ve realized I need a lot more free time for loafing on the couch and reading. Does anyone want to give me that as a belated Hannukah or surprise Christmas gift please? Anyways, I’ve seen the (HOT) covers of the previous books in your Succubus Diaries series and thought My Fair Succubi would appeal. If that isn’t the epitome of judging a book by it’s cover, I don’t know what is. 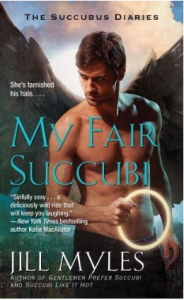 Being a n00b didn’t deter me from jumping into the third book in the series, and I am absolutely sure that I’m lacking understanding of the nuances of what’s going on in the world of Jackie Brighton. This is both good and bad. The good: I didn’t have to deal with page after page of info dump boredom. The bad: I’m still a bit confused as to some of the aspects of worldbuilding, but it didn’t detract from my overall enjoyment of the book. My understanding is that Jackie Brighton is a super-hot succubus with two masters, Zane, a gorgeous 4,000 year old vampire (fallen angel) and Noah Gideon a gorgeous 4,000 year old Serim (also fallen angel). Jackie loves them both, but the devil (har-de-har) is in the details.

Jackie and Noah are in the jungles of Mexico on the verge of a big find at an archaeological dig. It’s clear that Noah is in love with Jackie, and she’s…not quite there. Jackie isn’t able to sort out her feelings for both Noah and Zane and can’t figure out where she stands on being attached to a four thousand year old angel after living for 20-something years. Before she’s able to ruminate on it for any amount of time the two of them are unceremoniously dragged off to face the Serim council (a group of Earth-bound angels) for crimes they have apparently committed. Luc, an Incubus that must’ve had a starring villainous role in a prior book, manages to convince the Serim that a buncha shit that went down is all Jackie’s fault and he’s been wronged by her. Jackie is held in solitary, her watchman a Nephilim council enforcer named Ethan (his description makes me think of Dwayne Johnson with long hair…I do love me some of The Rock). Ethan, along with the Archangel Gabriel, are to bear witness to her punishment, which I’m not going to describe here because it’s horrible and hilarious at the same time. Jackie manages to get the drop on a Serim and wrangles a deal with Gabriel to retrieve the halo of the former archangel Joachim. Conveniently, Joachim is busy possessing the body of Jackie’s SuccuBFF Remy. The halo of an archangel holds an unimaginable amount of power, and Jackie wants to free Remy from Joachim’s possession, free Noah from the Serim and have the charges against her dropped, so she’s willing to go up against the odds to make it happen.

Jackie goes from one seemingly impossible situation to another, and while her actions in the face of danger may seem Marysuetastic, it wasn’t hard to remember that she’s Immortal (yes, she CANNOT be killed…she’s actually immortal) unless she’s deprived of sex for more than a certain amount of time. She’s navigating the supernatural world without a map, no one has bothered to take the time to give her the stereo instructions on being a Succubus. While this could be seen as a trope used to spring things on her, I felt this easily put the reader squarely into Jackie’s perspective without feeling like something was missing. The book is written in first person from Jackies POV, and Ms. Myles has done something that I consider amazing: Jackie’s thoughts and feelings are clear as a bell, but the first person doesn’t dampen the heat during the sex scenes or fail to convey the feelings of the other characters. And trust me, the sex scenes? I was surprised that the book and my eyeballs didn’t spontaneously combust while reading them.

I mentioned in a recent review that I don’t look for stories with love triangles, but hot damn, I think I may have a thing for them. It’s weird, because I really thought I didn’t like them. The ‘good lover/bad lover why is this woman so damn confused when the choice should be obvious’ can make a wall look like a pretty appealing target at times. However, the relationship between Jackie, Noah and Zane is totally plausible and not book-toss inducing. Jackie’s confused feelings read as completely genuine, as do Noah and Zane’s actions and reactions. I guess when a love triangle is done well, it just may be my cuppa. I hate describing books as quick, fun reads because it makes them seem disposable. This book happened to be an extremely quick (a day and a half for me, and I have three kids, a job, general insanity and I’m not the world’s fastest reader), super fun (I laughed, I got turned on, I was dying to read what happened next) read. But definitely not disposable. I’m going to pick up the Succubus Diaries backlist and get myself totally up to speed in the sexy, supernatural, mixed-up world of Jackie Brighton. B+