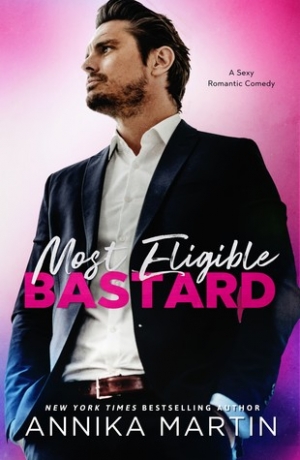 What a delight Most Eligible Bastard was! Full of your quirky trademark humour and sweetly charming, as well as full of sexual tension. There was even one section (“the Smuckers Incident”) where I was actually laughing out loud – not smiling, or chuckling but actual full-on cackling with laughter.

Vicky Nelson is a jewellery designer who makes her money through an Etsy store selling bow-ties for dogs while she’s trying to crack the department store market for human accessories. She lives in a west side apartment with her younger sister, Carly. It is obvious from the start that Vicky has a mysterious (and infamous) past and that she and her sister changed their names when they moved to New York. As a result of what happened before, Vicky has a healthy disdain for rich people – especially rich young men and a desire to stay out of the spotlight at all costs. Vicky took Carly out of a bad situation but she didn’t exactly have their mother’s permission; if they are discovered, Vicky’s drug-addict mother will take Carly back out of spite if nothing else and Vicky will not let that happen.

Because reasons, Vicky met an old woman by the name of Bernadette Locke. Bernadette owned a dog by the name of Smuckers. Bernadette was crotchety and difficult to like but was apparently convinced that Vicky was a “dog whisperer” and could read Smuckers’s thoughts and tell Bernadette all about them. When Bernadette died, she left her controlling stock in Locke Worldwide to Smuckers, with Vicky doing the “intepreting” and making all the decisions on his behalf.

Vicky had no idea this was going to happen of course and it’s not like she didn’t try to convince Bernadette that she couldn’t actually read Smuckers’s mind. But Henry, Bernadette’s son and Locke Worldwide CEO, is not having it. He had a fraught relationship with a difficult mother who cut him out of her life out of spite and he’s devoted to his company and his thousands of employees. In Vicky, he sees a grifter and a con-artist and he’s not going to let her mess with his company.

Thus sets up the enemies to lovers trope, the success of which mostly hinges upon both main characters actually being good people who are trying to do the right thing and Vicky’s evil genius when it comes to putting Henry in his place when he tries to play hardball. Something which involves a throne being delivered by street mimes. Brilliant.

Vicky is charming and funny and I adored her. I loved her pluck and resilience, as well as her self-deprecating humour.

I’m wearing a black sweater with dusky pearls, a gray skirt, and kitten heels. When I put it on this morning, I felt like it embodied the timeless glamour of black, but now that I’m surrounded by women in chic brights and wow-factor shoes and men in head-to-toe GQ, it seems to embody I’m a sad panda.

I love your quirky humour – I loved it on your blog as Carolyn Crane and it leaps of the page in Most Eligible Bastard.

Needless to say, my dating history veers toward cooks, musicians, and students on the ten-year plan. My longest-running boyfriend was a cook, a musician, and a student on the ten-year plan; he wrote songs for me that I hated, but I didn’t have the heart to tell him.

Newsflash: acting like you’re into a song that a guy is singing really soulfully while looking deeply into your eyes is harder than faking an orgasm.

So that one didn’t work out.

Henry is sometimes a bit of an asshole (for what he thinks is a good cause at least) but most of the time he’s a genuine, stand-up guy who understands things like consent (these days that is apparently not something which comes standard for all men alas), with passion for his business and designing greenspaces and buildings which work with the environment rather than imposing upon it. He remembers the names of the one thousand employees in New York because he feels it’s important to treat his staff well and he’s a dab hand at balsawood sculptures which he uses to excellent effect in the story. He’s also, of course, gorgeous and sexy but that wasn’t the most attractive thing about him.

Part of the story hinged upon mistrust and misunderstanding which is not my favourite thing but you did set up the reasons why each believed as they did and they made sense. You also didn’t belabor the point or drag out the misunderstandings unnecessarily.

There were a couple of things which were left unaddressed (for example, Carly’s fake name doesn’t ever seem to have been changed?) and Vicky’s backstory was perhaps a little over the top, but I was having such a good time reading the book I didn’t really care.

Vicky and Henry had scorching sexual chemistry but there was a lot more to them than that. I liked the way you built their connection and the trust that grew between them before introducing the physical. When the intimate scenes came the payoff was so much greater for it.  The barriers to their HEA felt authentic and so did the resolution to them.

Most Eligible Bastard is a feel-good funny romance and I loved it.