Review: More than a Man by Emily Ryan-Davis and Elise Logan

I’ve never read anything by either of you before. I have seen the cover to your book on Amazon, but barely spared it a glance. It seemed like generic SF romance and the title seemed nice if unexciting. What caused me to purchase this book, you ask? Someone on Amazon’s message boards mentioned that the hero had tentacles. Yup. I have never read tentacle sex, and this book had positive reviews, so I downloaded a sample and found it quite engaging, and thus purchased. 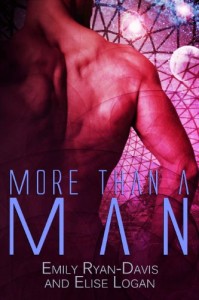 I am a bit at a loss of what to say about this book. It’s well written, but there is an unpleasant undercurrent to the set-up of the entire story. The sex is sexy (despite tentacles) but the characters need some more fleshing out. The plot? The plot is kind of ridiculous.

Noelle is a lawyer, and she has a bevy of issues – she fights with her mother, resents her sister, and is twice-widowed from previous relationships with Manporium husbands. Three months after husband #2 has died (which is never truly explained), she is off to spend the credits on husband #3 at Manporium. The Manporium is a futuristic shopping center where women can order a husband custom made. The purchaser can ask for anything he/she wants in their mate – long hair, long nose, long everything. Noelle gave her two prior husbands traits that eventually caused their deaths, so for the new husband, she’s going to be a careful shopper. However, when she synchs her futuristic smart-phone to the Manporium shopping center, it accidentally uploads her shopping list, which includes the ingredients for gingerbread men and a note to herself to buy someone a Christmas present of hentai porn. So when Aya (the hero) shows up on Noelle’s doorstep, he’s everything she wanted – nine inch dick, sexually dominant, devoted to her, etc. He just happens to taste like a gingerbread man and grows tentacles. Now that Noelle’s new Manporium husband has arrived, they are free to fuck like bunnies for the rest of the story.

Aya, the hero in More Than a Man, gets a little shortchanged overall. He’s created to Noelle’s specifications (even the weird ones) and if she doesn’t like him? He’ll just be ‘recycled’. I think I had a real problem with this – was he human, or wasn’t he? If the created Manporium men are human, how can they simply be recycled as if they aren’t real people? Furthermore, Aya has his own personality and emotions. Since those are both products of environment, there is a note in the story that he’s been implanted with some memories.  Whose memories? These aren’t addressed. Everything about him is for Noelle’s pleasure, from his hair to his nipple piercings. What if he doesn’t like the nipple piercings? Can he take them out if they weren’t his decision in the first place? It’s these kinds of questions that I was hoping to have explored in the story, because it’s a fascinating subtext. What do you do if you are a person created specifically for another? How can a relationship function when one person is manufactured – in all ways? Unfortunately, it was not explored.

Further, Aya is subject to Noelle’s whims, and Noelle hasn’t really proven herself to be the most reliable sort. She’s on her third Manporium husband. She has issues with her mother and deeply resents her sister, Joy, who is from a Babyporium. She is unwilling to tell her friends about Aya, or get him access to her apartment. He is her dirty secret. Throughout the story, much is made of how emotionally closed off Noelle is. This distresses Aya, who is completely dependent on her for his life. The fact that she doesn’t seem to realize just how much he is grossly dependent on her – and how callous she is about it – is only given token appreciation in the story. Rather, the story is about Noelle letting her boundaries down and accepting Aya in all ways. No one stops to ask if Aya wants to be with her. It’s assumed. I guess I have a bit of a problem with the subtext of that.

This is obviously meant to be a fun, out of the box story (tentacles, gingerbread men, and a manporium, after all). I think this would have worked perfectly in a very short, erotic story. However, the longer the story went on, the more the holes in the plot showed. I felt like emotional conflicts were thrown in (the mother! the sister! the ex husbands! the strange former flame at the party!) and none were resolved. In addition, I really felt like Aya was an object to the heroine through the whole story, rather than a person. I think that’s why I have mixed feelings and why I like myself a little less for enjoying the first half. I think the second half didn’t deliver at all.

While the story ends on a positive note, I find myself having a hard time believing in the HEA of the couple. The entire story takes place over about 2-3 days, and while I feel like the couple has come to a happy place for now, I also would not be surprised if we fast forwarded a year later to find Aya recycled and Noelle on husband #4.

B+ for the first half, C for the second. C+ overall.