“Barbara Buncle is in a bind. Times are harsh, and Barbara’s bank account has seen better days. Stumped for ideas, Barbara draws inspiration from fellow residents of her quaint English village, writing a revealing novel that features the townsfolk as characters. The smashing bestseller is published under the pseudonym John Smith, which is a good thing because villagers recognize the truth. But what really turns her world around is when events in real life start mimicking events in the book. Funny, charming, and insightful, this novel reveals what happens when people see themselves through someone else’s eyes.”

It is the new cover for this book that caught my eye at Netgalley and lured me into reading the description. Then I realized that it had been republished by Persephone Books (who brought us “Miss Pettigrew Lives for a Day”). Now Sourcebooks is making it available. Based on my response to “Miss Buncle’s Book” I have my fingers crossed that we’ll get access to more of D.E. Stevenson’s works. This is a lovely, sweet, gentle book that is at times funny, charming and then deliciously wicked. The humor is subtle and all the better for it. More a sly wink and a nod and a delighted chuckle though some bits are LOL funny. Stevenson uses human nature at its best, or worst, to engineer the comic bits but it is only ever truly skewering to the puffed up people who think more highly of themselves than they ought to. Only the ones who make themselves ridiculous end up losing out here. 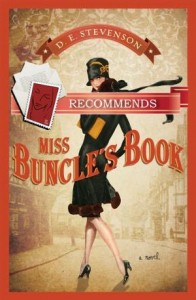 Her publisher’s change of the book title to “Disturber of the Peace” certainly fits the contents and how it impacts the lives and loves of the people of Silverstream. It even changes Barbara in a fairy tale way – she emerges from her cocoon a little more confident, a little more smartly dressed, a little more … more. Barbara never sets out to change people – unlike Heyer’s heroine Sophie – but she has an unerring eye and naturally picks up on little clues that point the way to probably outcomes as in the romance between Dorothea Bold and Col. Weatherstone. But she isn’t totally perspicacious in that she missed Sally and Ernest’s romance and the ridicule heaped on Mr. Bulmer that got him to sit up and notice how awful his home was due to his actions which then caused him to change.

It’s funny but also a little sad that no one, not even her closest friends and acquaintances ever imagine that Barbara could be the one behind this pointed book. It’s a lesson to us all not to overlook people merely because they don’t wear brilliant plumage or are a bit shy in public. People have hidden depths and Barbara hid hers well in her shabby clothing even as she avidly soaked up details like a sponge for her writing.

At times I’m not exactly sure about Barbara. She’s totally honest – something that amazes her publisher Mr. Abbot – which helps in her writing but also fairly naive. Even he wonders if she’s too sly for words or just hopelessly innocent. She does get wiser as a result of the effects the book has on the people around her, which shows in the second book she writes, but she also loses a touch of the openness and innocence that made her such a nice person. She’s a little toughened now, a hint harder. It will be interesting to see how she changes in the second book of this series. Though I love that Barbara is like a moth coming out (no, she’s not quite a butterfly), that she grows as a more confident person and that she finds love (though a restrained sort that will probably have her calling her husband Mr for a while) I’m slightly disappointed that said man who loves and admires her as she is, is happy she’s not quite as smart as he. I do like his way of proposing – very novel, if you’ll pardon my pun.

I was struck by how the publishing industry and publishers worked then vs now. Not too much difference actually. Mr. Abbot thinks that the public are generally like sheep in their reading – they follow the crowd and often need for things to be highlighted for them in order to “get it.” Abbot is also crafty in how he manipulates Barbara. Not meanly but in a way that initially puts his business first as he tries to get her to write and then keep her focus on a second novel – since the first is such a bestseller

In her novel, Barbara is kindest to the kind people of Silverstream and the two I enjoyed the most are Dr. Walker and his wife Sarah. Down to earth, unflappable and quietly but deeply in love. Sarah is also one smart cookie who immediately cottons on to the fact that the book is about her village and the people there – though even she can’t see beyond her own prejudices to believe that Barbara wrote it. Dr. Walker is a dear too, and so devoted to his intelligent wife – a woman of whose intelligence he is fully aware.

“Miss Buncle’s Book” also shines a spotlight on a now gone preWWII era when even middle class people had at least one – if not three – domestics in service, rose late in the morning to breakfast in bed, had tea served with a silver service, dressed for dinner, wrote copious letters and notes and had the Daimler brought around when they wanted to go out. The social classes were more strictly separated and servants still felt they were part of the household family and were willing to put up with their employers’ foibles. Though they can and did make some pointed comments about their “betters.”

I enjoy the little aspects of a book which strictly set it in one place and time. Here I learned about Marie biscuits and Benger. It also shows how specific social status was then – Mrs. Featherston Hogg commands people to her lousy At Homes – despite the undrinkable tea and awful tea sandwiches – merely because of her status. How? No one is quite sure but the situation is almost unquestioned. It also shows the less salubrious aspects of the era in that women were sheltered/stifled – note Sally’s and Miss King’s educations and how Mr. Bulmer tyrannizes his family. Lots of “there, there, let the man take care of you” patronage.

If you like “Miss Pettigrew” or gentle books about bygone times which were actually written in those times and which take their time to set up the action, then this might be for you. Watch as Barbara Buncle blossoms and finds within herself the strength that’s always been there, just waiting for its chance. B+