Recommended Read
Disclaimer: Robin aka Janet does freelance editing and she edited this novella. Sunita received the ARC and neither saw the book in earlier forms nor talked about with with Robin or any of the authors.

I’ve been waiting for this anthology since I first heard about it last spring. The authors are among the strongest writing historical romance today and the premise linking the three novellas is clever and unusual: each is set in the same location but in a different time period. The three are quite different from each other, as you might expect, but they fit together. And each demonstrates, for me at least, why self-publishing is such a critical alternative to traditional publishers. I would love to see these themes and storylines in a Big 6 book, but I’m not holding my breath. 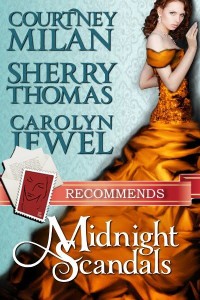 One Starlit Night by Carolyn Jewel is the first in the anthology and takes place in 1813. Portia Temple and Crispin, Viscount Northword were childhood friends and something more, but they separated and didn’t see each other for a decade. When they meet again, Northword is a widower and Portia is a spinster looking to marry and leave the household of her newly-wedded brother. Both still have powerful, unresolved feelings for the other, but the traumatic event that led to their parting seem to make a reconciliation impossible. Portia knows she can’t coexist under the same roof as her sister-in-law, so she is determined to marry and set up her own household. She has chosen someone with whom she feels she can live a comfortable life, but now Northword has shown up and reminded her of the good and bad things that lie between them.

I haven’t read a book by Jewel in quite a while, but I immediately remembered why her writing is so distinctive and memorable. By the second chapter I was completely immersed in the story. The prose was so hypnotic that I absolutely had to read on until the end, and I almost forgot where I was. The relationship between Portia and Northword is intensely depicted, and I had no trouble believing that they could emotionally pick up where they had left off.

The other characters are just are sharply etched. Portia’s brother is a man who happens to be a vicar, not a stock Minister character, and the scenes with Northword convey the easy relationship of two long-time friends. Eleanor, Portia’s new sister-in-law, is a terrifying person, not least because she really seems to be trying to do what she thinks is best. I couldn’t believe Portia didn’t loathe her; I certainly did.

There’s very little backstory; we never find out exactly what Northword has been doing for the past ten years (or Portia for that matter), but I didn’t care. I just wanted them to find a way past their differences and the pain of the past, back to each other. And they did. Grade: B+

What Happened at Midnight by Courtney Milan is the second novella and it is set in 1856/1857. It opens with a bang: Mary Chartley is being threatened by two of her father’s investment partners, who suspect him of embezzling from them and then fleeing with the money. She is rescued by the third, much younger partner, John Mason, with whom she might have had a future if her father hadn’t ruined her life along with his own. Flash forward eighteen months: Mary is now a paid companion, and John has finally tracked her to Somerset. John is convinced Mary knows where the money is and plans to force the information out of her if necessary, but he can’t help notice how she has been transformed. No longer the sweet, funny, captivating creature he fell for, Mary has trained herself to be blank and self effacing, so now John has two mysteries to unravel.

This novella is sharply different from the first. The prose is plainer and unvarnished, which suits the characters and the story. John and Mary are almost aggressively ordinary, by romance novel standards (although Mary is a gifted pianist and John a skilled engineer), and their story is infused with melancholy. Mary is still mourning the passing of her past life and now is trapped in a present that she is unable to improve or escape from. Her companion position has turned into a nightmare, with an outwardly benevolent employer who is not what he seems. Over the course of the story, John learns to trust Mary again, they rekindle their romance, and the villain is foiled. The way this last outcome is achieved is a wonderful use of a historical event in fiction. It is organic to the plot and faithful to history.

I liked John and Mary. They were a bit prosaic, but the way their romance developed was warm and genuine and sensual. Sir Walter didn’t work that well for me as a villain. I wanted to know why he was the way he was, and without that knowledge he was more of a stock villain than he might have been. I also had trouble with the fact that Mary was so capable at the beginning of the story but then was so downtrodden and unable to help herself when she was a companion. I found that hard to reconcile. The defeat of the various villains at the end was a bit over the top as well; after the melancholy of the majority of the novella, I found it hard to shift emotional gears so thoroughly. These caveats notwithstanding, I enjoyed the story a great deal. Grade: B

Finally, Sherry Thomas’s A Dance in Moonlight carries the story of Doyle’s Grange into 1896. Isabelle Englewood has rented the house for reasons that no longer apply. She is preparing to leave when she encounters Ralston Fitzwilliam, who resembles her erstwhile lover, Fitz, in person even more than in name. Fitzwilliam is enchanted by Isabelle and cannot resist what she offers despite knowing he is only a surrogate for her Fitz. Despite this fraught beginning, both find that they are drawn strongly to each other. But can Fitz trust that he is more than a convenient replacement? For that matter, can Isabelle?

I should say here that I haven’t read Thomas’s previous novel, Ravishing the Heiress, in which the story of Fitz and Isabelle begins, so I had no preconceptions about Isabelle. Readers who disliked her there may not be able to overcome those attitudes. For me, the story of mistaken identity and the way in which Isabelle and Fitzwilliam find a new, unblemished point of connection was engaging. I really liked the first half of the novella, which focuses almost exclusively on the two of them and exemplifies Thomas’s beautiful prose and mesmerizing ability to depict sensual, romantic interactions. Although her style is quite different, my reading experience was similar to the one I had with the first novella in the anthology.

I found the second half less compelling. Once other family members (and Fitz and his wife) show up and the focus expands, I felt as if I could see the plot machinery operating. The constraints of the shorter format meant that the objections to Fitzwilliam (he is a dead ringer for Fitz) and the internal conflicts between the characters (their quickly moving romance and their lingering feelings for previous partners) had to be wrapped up quickly. As usual, though, Thomas’s characterizations and writing are impossible for me to resist, and I found the novella to be an enjoyable read. Those readers who come to the experience with strong feelings about Isabelle and Fitz might have a slightly different reaction. Grade: B-

Taken as a whole, there were a couple of standout aspects of the anthology. First, the production values are excellent, from the cover to the formatting to the clean, polished text. Second, each story took a risk with the plot and the heroine’s character. In Jewel’s story in particular, but in the other two as well, the heroine did things that I haven’t seen recently (or ever) in traditionally published novels. It reminded me that for all the problems readers encounter, there are rewards to the self-publishing model that make trudging through some of the slush worthwhile. As I said at the top of this review, I’ve been waiting for this book for a while. It was well worth the wait.