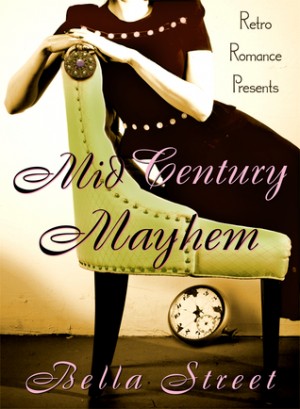 Your new time travel romance Mid-Century Mayhem is a really interesting book. However, even though it’s categorized as a time travel romance, it’s more of a time travel adventure, the first in a projected series (presumably the romantic subplot will be explored further in the next installments). It ends on a cliffhanger, but I was okay with this, since as I read the book, it seemed to fall more into the serial drama mode, as opposed to watching the hero and heroine get together. Yet I really didn’t mind. This is an exciting and inventive book that kept me on the edge of my seat. From chapter to chapter, I really didn’t know what would happen next. Since I usually can figure out what will happen in almost every book I read by reading the first chapter, this was a lovely feeling, and I thank you for it.

It’s great to see a book of this quality being self-published. Many self-published books (including one I reviewed previously on Dear Author)are unremittingly bad, but MCM is quirky, engaging, fast-paced and clever. There are only two POVs, the writing is smooth, polished and obviously edited, and the errors are minimal.

It also does a good job of avoiding those time travel tropes that I hate. A lot of the more romantic time travel stories tend to be practically wrapped in gauze, and the heroine does not have to deal with boring practicalities like worrying about money, clothes, transportation or lack of ID when whisked back to the past. However, in MCM, the heroine, once she’s back in 1954, has to deal with all this real-world crap in spades. It’s scary, awful, and nerve-wracking, and I love it.

So, the plot: our heroine, Olivia Haugen, Nashville interior designer, has an eccentric older friend who has been mysteriously hoarding piles of valuable 1950s mid-century modern furniture in her warehouse. The big question is: where did all this come from? The answer (of course) is that there’s a time portal in her warehouse, mysteriously activated by a strange necklace and bracelet. Well, Olivia and her friend’s nephew Kyle go back through the time portal to find themselves in 1954 Detroit, at the historic Northland Mall. Olivia is primarily concerned with getting home– at first she doesn’t think there’s anything deeper going on here– but Kyle keeps running into his family, and there’s a strange mustachioed jeweler obsessed with getting that necklace and getting Olivia out the way. What is going on? And will our heroine ever return home?

It’s such a weird and deeply kooky concept, but I loved it, mainly because there were no castles or druids or lords or standard Eurocentric time travel romance tropes. Instead you’ve got auto workers and housewives and sleazy hotel clerks and Yooper cops and bewigged burlesque queens. The period stuff seems convincing to me, the pop culture references– past and present– are both appropriate and fun (and there’s a lot about local Detroit history and the auto industry which is very cool). In some ways it’s reminiscent of Stephen King’s 11/22/63, and with its combination of weird SF elements and earnest, all-American earthiness, it reminds me also of the wonderful (and sadly cancelled) show Journeyman. Olivia is a bit flaky and impetuous, but she’s also likable and resourceful, and I became easily invested in her.

If I did have a problem with this book, it’s with Kyle. Oh, Kyle. He’s a good foil for Olivia, but I found it hard to warm up to him, because by and large he seemed on the verge of being an MRA creeper. (An MRA means a Men’s Right’s Activist; the term is associated with white privileged men who hate feminism, fear women, and whine about the supposed burden of political correctness and the “feminization” of contemporary culture.) He’s an uptight auto engineer with lots of anger issues who can’t get a date, calls women “creatures” or “females,” and moreover idealizes the men of the Greatest Generation who “saved the world from fascism.” This is what he thinks from his POV later on in the book after Olivia briefly ditches him:

A part of him knew he could stay here in 1954– he would probably thrive with his knowledge, and enjoy the rewards that came with loyalty and hard work. He would be appreciated as a man, and not have to grovel in an artificial, politically correct environment. Maybe he’d even find a female who would scoff at the notion of being a housewife and a mother. Right up until the 60s.

It’s nice to know that the heroine likes the hero about as much as I do. I mean, she has to put up with him, since the two of them together have a better chance than by themselves, but once back to the present, she dumps him like a hot potato.

At first I was deeply afraid that Olivia would be forced to get together with Kyle in a contrived HEA, but fortunately, the relationship is not being rushed. Kyle, as romance protagonists go, is a bit of a creep, but at least he’s a middle class guy who mostly seems to respect Olivia, and seems to be a decent guy at heart (albeit one with no social skills); so I’m not totally against the idea of them eventually getting together.

But the guy really needs to grow up and get his head out of his ass.

Anyway, all things considering, this is only a minor hiccup in what is basically an exceptionally fun novel and the promising first entry of your new series. I recommend it to everyone who’d like to read a diverting and refreshingly different time travel story.

I can’t wait to read the sequel, and to see what wacky hijinx Olivia and Kyle get up to next! I give it a B+.

The reviewer received a review copy from the author.