REVIEW: Merrily Ever After by Jenny Holiday 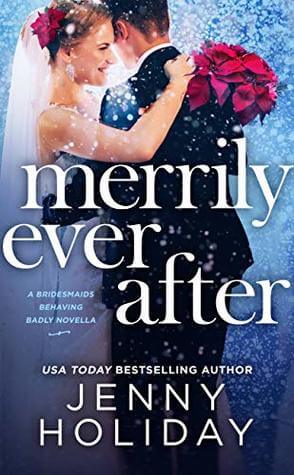 I really enjoyed It Takes Two earlier this year so when I was offered Merrily Ever After for review I jumped at it. I’ll be honest and say I still haven’t found time to read One and Only but I don’t think it’s necessary to have done so to understand this novella.One and Only is set against the backdrop of Elise and Jay’s wedding but they are not the romantic pairing of the story. This book, and the free novella Once Upon a Bride, is Elise and Jay’s story.

Once Upon a Bride is about how they got together (I read it after this novella because that’s the way I roll) and Merrily Ever After is about a crisis which happens to them after their wedding. The story is set shortly after the events of It Takes Two, in the lead up to Wendy and Noah’s wedding, which I believe will be the backdrop for the final full length novel of the trilogy, Three Little Words (out in late January 2019).

As I said above, this novella stands alone pretty well so it works as an entry point into the series.

It begins with Elise finding out, to her stunned amazement, that she is pregnant. She greets this news with both awe and dismay. She had not believed she could have children and so had sublimated any desire to be a mother.  (Elise has endometriosis. As a result she has only one ovary and extensive scarring – doctors had told her having a child naturally was all but impossible.) Jay has been very open about not wanting children. Prior to their marriage it was something they had specifically agreed upon. Before dating Elise, who is seven years his junior, he had been so devoted to not being a dad that he chose to date older women whose biological clocks had stopped. That Elise could not have children was a feature not a bug for Jay and one of the ways they both rationalised they were “meant to be”.  And now, Elise is pregnant. She wants the baby but will it cost her Jay? She’s convinced he will leave her, so definite is his stated wish to not be a dad. So it feels like she can choose to have a baby or have her husband, but not both and it’s a Sophie’s choice she finds unbearable.

Not having read about Elise and Jay’s wedding and not having read the prequel novella either, at the time, I went into this story somewhat blind. I only knew the blurb. (Actually I didn’t immediately realise who Elise and Jay were relative to the series, but I put it together pretty quickly). I was fascinated by the premise. I wondered how you could pull of HEA 2.0 with so fundamental a difference. Having a child is not something there can be compromise on. It’s a binary decision; yes or no, you do or you do not. For a happy result, one of them would have to change their mind. Either Elise would have to decide (and be happy or at least, comfortable, about it) to end the pregnancy or Jay would have to embrace parenthood. There’s also the thorny issue of Elise being the decision-maker about whether to proceed with the pregnancy and if she does, that Jay will be a dad even if he chooses not to be a part of it’s life and that he will have a financial responsibility. It’s something I could imagine a guy who has been clear in his desire never to be a father being angry about.

If I’d read the other books first, I’d have known the reason Jay didn’t want to be a dad. I assumed he just didn’t want kids. I don’t think there needs to be any reason for that decision for it to be valid. But in this case, there is a reason and it’s about his own childhood and the poor parenting examples he had from his biological dad and his stepdad as a child. He has a deep fear he will be a terrible father; the only way to ensure the cycle of abuse stops is not to have children.

Of course, Jay is a great guy and a fantastic caring husband. Anyone who knows him knows his fears are not actual risks; he will be a fabulous dad, engaged and present, protective and loving. Merrily Ever After charts Jay’s journey to that realisation and Elise’s journey to believing Jay is really in this with her after his initial bad reaction. And he does react badly at first.

I’m still curious about how a HEA could come about when there is an unexpected pregnancy that one half of the couple wants and the other half absolutely does not; perhaps there cannot be a HEA in such circumstances? But this book tells a different story. As it happened, I got on board with the tale it did tell and found myself charmed by Jay and Elise and their love for one another. Jay basically won me over with this:

But he worried about her. He couldn’t help it. Sometimes her endometriosis pain was so bad, she threw up from it. But that hadn’t happened for a while—not for a couple months at least, now that he thought about it.

“You sure you’re okay?” He killed the engine and turned in his seat to really look at her. They’d tried to time their getaway around her menstrual cycle, the first few days of which she was usually out of commission, but it wasn’t always that predictable, so maybe she was about to be plunged into her monthly battle with pain. In which case they would check in to a Wi-Fi- and TV-equipped hotel and hole up for a weekend of mindless entertainment.

“Yeah, yeah. I was just feeling a little under the weather, but I’m fine now.”

She looked like her usual self—the paleness from before was gone. But it would be just like her to be downplaying a serious bout of pain so as not to derail their weekend. He wasn’t going to let that happen. “Are you sure? Because I’m not going to be disappointed if we need to change our plans.” Which was a lie, but her comfort was vastly more important than his dick.

The novella is sexy too; Jay and Elise have a strong sexual connection and they scorch up the sheets before she tells him and after things settle down between them.

The other great strength of the series is the friendship between Elise, Gia, Jane and Wendy. All three of Elise’s friends step up for her and have her back no matter what and I am just so here for that kind of female empowerment.

Because it’s a holiday novella, there is an element of fairy tale to the somewhat schmaltzy ending but I actually love that about holiday novellas so I don’t count that as a bad thing.

Even though I barely knew Elise and Jay before opening Merrily Ever After I found myself quickly caught up in their story and invested in their dilemma. I liked the way they communicated with each other and I believed in HEA 2.0 – if Jay’s change of heart felt a little quick, well I put that down to a Christmas miracle. I feel like we could all use more of those.