Other readers might glance at the blurb and think, “A hero who’s a preacher? Really?”

I, on the other hand, thought, “Sexy pastor, bring it on. A contemporary marriage of convenience? Yeah, right. Whatever. Good luck with that.” 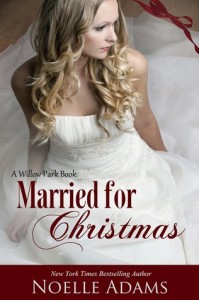 After years of dreaming, Jessica is finally getting married, but the marriage isn’t exactly what she thought.

Daniel is her best friend, and she’s known him all her life, but he’s never gotten over losing his wife two years ago. His dream is to become the pastor of the church in their hometown, but the small-town congregation keeps balking over calling an unmarried minister. Since Daniel needs a wife and Jessica wants a husband and family, she proposes an arrangement that benefits both of them.

Jessica can be practical about this marriage. She knows what she’s getting into, after all…

I apologize for my unvoiced and uninformed snark. This was by far the best contemporary marriage of convenience romance I’ve read, and it’s a helluva Christmas story too. (Is that blasphemous? I did my penance with all those tear-stained tissues, right?)

Married for Christmas isn’t perfect, but I didn’t even notice until about the third or fourth reading, because I was rooting for Jess and Daniel from very first chapter. Friends-to-lovers. Strong but vulnerable heroine. Quietly sexy beta hero. Angst-o-rama unrequited love resolved by Grand Gesture Groveling. Big slobbery dog. All buttons pushed.

On the surface, heroine Jessica is a bit of a mess. She sees herself as utterly ordinary (“average, forgettable, no frills”), and the few lackluster dates she’s had over the years have reinforced her belief that romance and passion are out of her league. In reality, Jess is strong and smart – she’s brilliant at her job as a web designer – but she’s so quietly capable and unwilling to draw attention to herself that she’s overlooked by nearly everyone.

The one exception to her desperate loneliness is her childhood friend (and unrequited love) Daniel. He’s a widowed pastor who longs to return to his hometown congregation, but his age and marital status are red flags to the stodgy church elders – which sets the scene for the marriage of convenience.

What makes this story work is the constant negotiation that takes over their formerly lighthearted friendship. In the first scene, he steals food off her plate and she snipes at him for rebuffing her beloved pet (“Her name is Bear. Not ‘the dog.’”) and refuses to let him try to fix her car. But once The Proposal is out there, the boundaries are completely reset – all the inherent trust of their shared history is overwhelmed by the over-analysis of every word and action. Jessica consciously rationalizes everything, refusing to acknowledge her emotions because she doesn’t want Daniel to feel obligated.

And in all its awkwardness, the negotiating continues into the bedroom. I was really impressed with how the heroine’s virginity was treated as a simple fact and not a major plot point – and how the wedding night scene evolved from hesitant suggestion…

“If I’d rather read than what?”

Her cheeks warmed, but she was determined to be adult and mature about this topic. “Well, I was thinking we might…we might have sex. But we really don’t have to.”

“I didn’t know if you’d want to right away.” He placed the book on the nightstand, which was an immense relief. At least he didn’t prefer Bonheoffer to having sex with her.

“So we got all this worked out then?”

He nodded, a warm look in his eyes that made her shiver. “Sex tonight.”

While all that negotiating is great at showing the reader how Jess and Daniel rebuild their relationship, it’s also the source of some rather extreme emotional whiplash – hence the bump down on the letter grade. For each step forward, there’s an immediate step back. Every breakthrough is followed by a clueless remark that kills the fleeting rays of hope. It might be realistic, but both Jessica and the reader need a chance to enjoy a bit of momentum before the next crash of misunderstanding.

So – the Sexy Pastor thing. Yes, Daniel is a pastor. He writes sermons and reads Bonhoeffer in bed and wrestles with his faith. And ohhhh, yes, he’s sexy. Scruffy, brainy, beta sexy. Let’s just say he’s not a celibate priest.

Does Daniel’s profession make Married for Christmas an inspirational romance? Yes and no. According to the author’s note in the front matter:

The point of this story is not to present any sort of religious message, but because faith is important to these characters, the plot and their development turns on their spiritual condition as much as anything else. In writing a story like this, there’s likely to be too much religion for some readers and too little for others. I don’t know if I’ve navigated this challenge successfully, but I do believe it’s worth the attempt.

Goal achieved. The characters’ beliefs are an integral part of their daily lives and their relationship, but their “spiritual condition” is never beaten into the reader’s brain with self-righteous preaching or Magical Bible Verses.

Could this story have worked if Daniel was a Billionaire CEO With A Tragic Past or Navy SEAL With PTSD or some other romance hero archetype? I don’t think so. We would have gotten the requisite internal struggles over self-doubt and trust, but Daniel’s unique and highly visible role in their small community, and Jessica’s ambivalence about being the “perfect pastor’s wife,” is a much-needed source of external conflict (and humor) that keeps the story from turning into just another predictable Plain-Jane-Redeems-Manly-Man trope.

And, of course, the Sexy Pastor thing allows us to get that Gloriously Groveling Grand Gesture ending:

“Why are you panting?” she asked stupidly.