If I’d read this a few weeks ago, news about the NSA would have come as no shock to me, since it’s obvious that someone has been spying on my marriage. “Spot-on” is a phrase that comes to mind for this novella — also, considering it’s a sequel in a genre literally defined by the concept of the happy ending, “brave.”

Brave is the word for a sexy story that opens with the heroine helping her puking child. Amber’s family is having a tension filled departure from Jamaica, after a dream vacation that wasn’t.

When Caleb told her back in the fall that he and Ellen were going to get married here, she’d mentally packed herself a suitcase full of new sundresses and beach paperbacks. She’d laid by the fantasy pool on a fantasy lounger in a fantasy bikini, skin shining with oil, holding Tony’s hand.

Instead Amber got more of the same — taking care of squabbling, needy kids, no time with her husband, and no private place in which to even experience how miserable she is.

She hated that she’d become the kind of woman who looked forward to the next time she could be alone to cry. 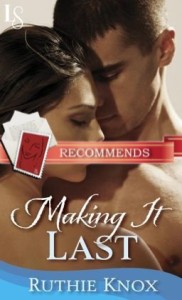 Seeing Amber’s distress, her family arranges for her to spend a few more days in Jamaica on her own, while Tony wrangles the kids home. But Amber’s problems go far beyond needing a little quiet time: she’s lost her sense of self and her faith that she’s on the right path. And if Tony doesn’t want everything to slip away, he’s going to need to put aside all of his other priorities to find her, and their marriage.

The blurb for this story focuses on the sexy times — and the sexy times are definitely hot, as well as an important development in Tony and Amber’s relationship. They’re about change and familiarity and identity, and how important those all become when you’ve been with one person for over a decade. But it’s a much darker read than you’d get from the blurb. Both Amber and Tony are in a great deal of pain, and there are no magic fixes and no compromises to the integrity of the situation (which means there are plenty of compromises for the characters.) Even the funny moments are funny in a painful way:

She had to admit, she’d kind of gone off cocks the last few years. Sharing a house with four of them would do that to a girl. Back when she met Tony, she’d been so inexperienced that his cock had seemed like this miraculous thing, but lately she just wanted every penis in the house put away. She didn’t want to hear about them, look at them, think about them. Didn’t want to know when they were stiff or itchy or getting slammed in drawers.

I don’t think it’s a spoiler to say that the story ends well, but if you’re primarily looking for a cute epilogue for a favorite couple, this ain’t it. Instead, it’s a moving and insightful reaffirmation that the happy ending we romance readers cherish has lasting value, and is worth fighting for.

This story will be especially meaningful for those who have already read How to Misbehave (B+ review here) as Amber and Tony rediscover the qualities in each other that originally drew them together when they were trapped alone in that dark basement. But it will probably strike chords for anyone who’s been married for awhile, and knows that Happy Ever Afters have to be deliberately chosen, again and again.  B+