Having been a long time reader of series, I’ve come to expect that a series will generally start losing direction or steam or focus around the 5th book or so.  Fortunately, this series has not sagged at all and I think it has to do with not only the tight writing, but the tight focused plotting.  While each book contains a battle, it is all working toward a greater end that was visible from almost the beginning: Kate’s showdown with her father. 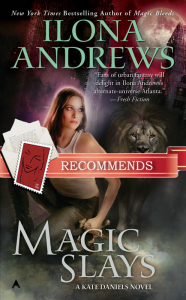 I know readers often ask whether you have to read the previous books in the series in order to understand the current release and I think for the Kate Daniels series you kind of do, at least to get a full appreciation for the subtle changes that are occurring to Kate who begins the series arc as a complete loner who just lost her mentor to becoming part of the Pack.  Kate in the beginning of the series is a different person than Kate five books later and that makes sense because so much change has happened in her life.  The change, though, might go unnoticed if each book is read in isolation.

From Jia’s review of Magic Burns:

For those readers new to the series, the Kate Daniels books take place in a futuristic Atlanta suffering from an advanced state of urban decay. In this world, magic batters the earth in waves, eating technology. When tech is up, spells fail and magical constructs lose their power. When magic is up, cars cease functioning and planes fall from the sky. But every seven years the waves increase in intensity until they culminate in a magical tsunami called a flare. During flares, magic is so powerful that even gods can walk the earth.

For those unfamiliar with the series (and this paragraph will contain spoilers for the past books), Kate Daniels used to be a mercenary, hiring out her sword for a fee.  She then became part of the Guild, a group that polices magical beings.  After a falling out with the Guild, Kate starts her own protection agency.  Magic Slays opens with Kate having no clients and nearing financial ruin because the Guild is bad mouthing her and others don’t want to enrage the Beast Lord of Atlanta aka her mate, Curran.   And that is just her business life.

Her personal life involves constantly maintaining boundaries with Curran who would like to order Kate around, trying to decide what is best for her foster daughter who has run away from another boarding school, and being a good friend to Andrea who is recovering from a recent trauma.

One complaint I’ve read about this book is the huge cast of characters.  It is true that there are a number of people being tracked in this story and that is one reason that it has helped to have read the previous books.  New readers to the series might be easily confused.

This series is sort of a cop/detective mystery series wrapped up in an urban fantasy setting.  Kate is a kind of paranormal dectective, a powerful one.   What moves Magic Slays forward is twofold.  First, the mysterious object that is causing mysterious deaths to shapeshifters and vampires.  Second, the overaching series mystery of Kate’s origins and her destiny.  Magic Slays is also the most romantic book of the series because a great part of the story arc in the book involves Kate and Curran negotiating the terms of their relationship.  We are in the “happy ever after” part of romances where two people in love try to find out how to live with each, how to tolerate each other’s quirks after the emotional high wears off.

I’m not going to say that Magic Slays brings much of anything different to the table than previous books.  The mystery and how it is resolved is mechanically similar.  The relationship, as I mentioned previously, plays a bigger role than it has in the past.  The thing is that all of the previous books in the Magic series are excellent and thus saying that the recent installment isn’t different is a complement.  It’s another well constructed entry into an excellent series that featured some real character growth.   B+