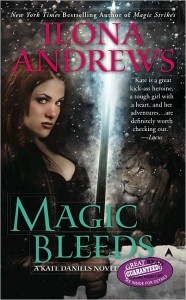 Sometimes as a reader your expectations are shaken, but in a very positive way. My expectations in non romance genre books have been set by popular series like those of Laurell K Hamilton, Charlaine Harris, and Janet Evanovich wherein love matches are hinted at but never resolved or take years and several books to come to fruition. Thus, I would not have guessed that we would have been treated to an overtly romantic tale so early in the series (Book 4). As a romance reader, I rejoiced although I wonder how all those hardcore Urban Fantasy readers will respond.

The story opens with Kate, our intrepid Guild Hunter, preparing a dinner for Curran, Beast Lord of Atlanta, payment for a lost bet. Kate is well aware that dinner is not the only thing on the menu. This will be the consummation of their relationship, something that has been hinted at and flirted with, but never fully explored. Kate has held herself aloof for so long that even mentally coming to grips with caring for Curran is a big step for her, let alone acting out the physical incarnation of those thoughts. But Curran never shows up and when Kate calls the Keep, she is given a very real brush off.

The problem is that Kate and Curran are no ordinary people but rather two very powerful magical beings. When two powerful, magical beings break up, there are dangerous ramifications. Particularly for politically minded people who want to use the situation for their benefit. Or for someone like Saiman, a former god who likes to play with Kate simply because she presents a challenge to him.

Book four reveals many details including more about Kate’s past and her destiny. Woven throughout are myths and this is what was really engaging about the story. The myths in this book are not anglo saxon based. Instead, it’s an amalgamation of Eastern mythologies, far east, middle east, and west.   I loved getting that tiny peek into other cultures’ myths and religions.   We need more diversity and this provides it in a wholly refreshing way.

In each book, Kate is presented with a problem with a magical source and each problem requires her to reveal more of herself. For Kate to protect those she has begun to care about, she places herself in greater danger as more of her power is needed to defeat each problem. In this story, the problem is an unknown being who goes into a power filled place, picks out the most dangerous people and kills them, swallowing their power, and leaving their corpses full of contagious disease. It is sweeping across Atlanta and starting to affect the shifters. Even though Curran and Kate are angry with each other, they have to start working together to solve the problem.

Having been a long time romance reader, the romantic conflict is a familiar one to me.   Heroine and hero misread each others intentions leading to a long drawn out and unnecessary separation.   It’s entertaining seeing this in an urban fantasy between a bad ass hunter and an equally bad ass Beastlord.   To some romance readers, the romantic trope of the big misunderstanding might seem dated but both Curran and Kate are hardheaded and full of pride. Showing vulnerability to each other is dangerous, particularly when the two are engaged in a battle of wills even when they are together, let alone when each are off separately licking their wounds.

Overall, I thought that this was a great and very romantic, sexy urban fantasy and I can’t wait for the next addition to the series. B+

This is a mass paperback published by Ace which is one of the Agency 5. Penguin ebooks are priced at $1.00 less than the paper copy book.