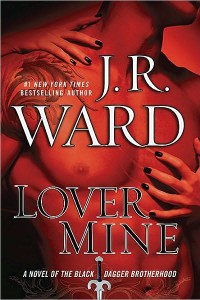 It may surprise you to know that I didn’t hop on the Black Dagger Brotherhood bandwagon until  Lover  Revealed was released. Before anyone has an aneurysm, know that I did pick up all the books in the series and read them in order. Like many other fans out there, I was inexplicably sucked into the name-dropping, slang-using, fated-mate, deus ex machina loving world of the BDB. Someone (*cough* Jane *cough*) noted that Ward is a freaking genius in that fans can look past all that and actually like the BDB books. And I did like them. Even loved them…until  Lover  Enshrined; but that didn’t stop me from reading  Lover  Avenged, and perhaps it should have. However, for some reason, I cannot bear to admit defeat with this series, which is quite unusual; I’ve given up on other author’s series for lesser transgressions. The BDB is like crack, and with  Lover  Mine, I’ve come damn close to rediscovering that initial high.

Lover  Mine is the story of John Matthew and Xhex’s, along with the continuation of Lash, the homoerotic Blay/Qhuinn storyline, an update on Payne, the Scribe Virgin, the Omega, Tohr and pretty much everyone who has been in every single prior book. Even Mary made an appearance, which is like a Bigfoot sighting. But let me get back to the synopsis. In the prior book,  Lover  Avenged, John Matthew and Xhex finally got it on, but Xhex, being the cold assassin (and  symphath) that she is, didn’t allow any intimacy between them. Angry at her attitude, JM walked out of their last boot-knockin’ session without a backward glance, in an attempt at role-reversal. After an attack on the  symphath colony Xhex goes missing, and JM admits she is, without a doubt, his mate. Xhex was abducted by Lash during the battle and is being held by him in Caldwell. He’s using his badass Omega-gifted powers to hold Xhex, beat her, rape her and generally fulfill his disgusting desires. While this is happening, the Brotherhood and the Shadow brothers (Trez and iAm) are searching for Xhex and JM is slowly going crazy with fear that he’s lost his one and only.

Xhex wouldn’t allow JM to get close to her because she was sure her  symphathnature would drive him insane, as it did her previous  lover, the brother Murhder. Everything JM does for her makes Xhex, ironically, feel less worthy, but the beauty of  Lover  Mine is that both Xhex and JM have problems, but rather than gloss over them, Ward has them face them (in JM’s case, a walk through his past) together. When this happened I was practically squealing with glee. I don’t want to give away all the easter eggs here, so I’m going to move on.

Almost lockstep with the H/H storyline (to which, thankfully, all the secondary storylines are tied) is the background of Darius’ story told from his POV in 1644. I freely admit that I didn’t love this part of the book, as it felt a bit  flat compared to the action that was taking place in present day.  There’s also a crazy-ass "Paranormal Investigators" story happening in South Carolina at the same time as JM/Xhex. This was even more distracting than the Darius historical that was going on. While I initially thought these two things to be extraneous page-filler, I realized I was dearly wrong, and  Lover  Mine is the tightest BDB book in terms of primary, secondary and even tertiary stories that I’ve read from Ward in a long time. No, I didn’t love the secondary/tertiary storylines, but by the time I finished the book, I definitely appreciated them. And it was certainly more enjoyable than an info-dump.

Initially I thought this was going to be a Rhev/Elhena rehash: 92% of the book would focus on other storylines and the H/H would be together for the other 8% of the book. I am doing a happy dance that this is not the case. In addition, Xhex keeps her badass assassin title, her weapons, and her status as an alpha female. She doesn’t become a ghost, a queen, a shadow. Which is an absolute joy for me, as I’ve felt that so many of the females in these books are simply there to keep a romantic storyline going. Yes, the book has problems, holes, and goes off on tangents that could fill an additional 300 pages, and most likely will at some point, but this book fulfilled quite a bit on the wishlist for me:

Should I start another wishlist?  I’m going to.  Can we enter Blay’s bedroom already? Even if he isn’t with Qhuinn, I want to know exactly what’s going on in there.  Can one of the books just focus on the two of them? There’s such a rich history there and I would love to see them together.  There’s clearly still something between Vishous and Butch, and damn, I wish it would get explored, but I know that’s not going to happen. Can Payne keep being the tough bitch we’ve come to know and love? Can Lassiter’s story work within the storyline we’ve got going? Please, make a road trip for Murdher. For me,  Lover  Mine brought the magic back to this series, which seemed to be hurting after the last two entries. I am super excited to read the next in the series, and this one is now on the shelf.  B+

→ Shuzluva
Previous article: REVIEW: Lover Mine by JR Ward
Next Post: Tuesday Midday Links: Incest Saves Lives (if You Are a Spider)