I’m trying to decide whether this counts as a bodice-ripper or not. I know I started whimpering piteously about a third of the way through and didn’t let up until I reached the end — long after I should have gone to bed. Bodices, they were certainly ripped… which metaphorically encompasses all sorts of terrible things happening, not just rape. But can it be a true bodice-ripper if your heroes — we have two — are not raging assholes doing most of the ripping? Someone who knows the subgenre better will have to tell me. 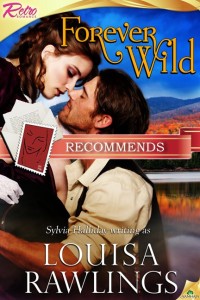 The book follows two storylines, happening concurrently in 1873. Marcy, who has always loved her simple life in the beautiful Adirondack wilderness, feels vulnerable and anxious after her parents die in an earthquake. She sets out to find herself a rich city husband, but instead falls in love with Drew — who would be a rich city man, if he’d give up his dream of painting and work for his father’s ironworks. Marcy is happy to live on love, but Drew can never quite believe that she wouldn’t rather be rich.

Meanwhile, Drew’s sister Willough is trying to earn his place in the family business, but her father refuses to listen to her or give her any real responsibilities. Only Nat, one her father’s founders, seems to understand her frustration and encourage her ambitions — but his bluntness and physicality fill her with terror and send her towards the safeness of the seemingly perfect gentleman Arthur Gray, her mother’s longtime cicisbeo. (Yes, this is very icky. But it’s established that they were never actually lovers because Willough’s mother is Seriously Repressed.) Willough is completely fooled by appearances, and has no clue that Arthur doesn’t look upon himself as her kindly uncle.

Although the course of true love goes far from smoothly, the first parts of the book are quite sweet, with teasing and growing comradeship amongst both couples. Marcy and Drew have a particularly playful relationship, with lots of laughter and mock fighting; Willough and Nat have more conflict, primarily caused by Willough’s repressive upbringing, class consciousness, and blind faith in her father, despite his environmentally devastating business practices.

Then it started to get scary and my heart jumped into my mouth, where it bounced around frantically until I could turn the final page button. I have to warn you — if it bothers you in a romance, you’ll probably find it here. [spoiler]There is a rape, physical abuse, and a miscarriage. There are separations, though not tragically long ones. There’s a little adultery. There’s even one of my biggest personal fears, which coming near the end as the cherry on top was almost funny. (Almost.) [/spoiler]

But unlike many intense romances, most of the worst stuff is not done by Drew or Nat. (Some, in fact, is done to them.) They have their moments of cruelty and sexual aggression, because this is a romance from 1986, after all, and there are Misunderstandings. But they’re essentially good men and genuinely in love, so their bad behavior never goes very far.

It’s hard to grade this because I haven’t done enough reading to compare it to others in the genre. I’m going with these factors:

— How engrossed and emotionally involved I was. I wasn’t joking about the whimpering — this took me miles out of my comfort zone, and I don’t consider myself a particularly sensitive reader. But I never thought seriously about giving it up. Damn it, I was suffering and there had better be a happy ending! (Spoiler: there was.)

— How well done the settings are. The story travels all over the place: The mountains and lakes and simple cabins of the Adirondacks; Paris; rich Old New York; poor Old New York. I can’t swear every detail was right, but I always felt a sense of where we were, and I never felt jarred out of the story. Descriptions aren’t generally lush or fanciful, but straightforward and accessible:

Marcy wandered down to the water’s edge. From its still surface she plucked a water lily, soft, golden velvet with a ruby center, and held it to her nose, inhaling deeply of its rich scent.

Forever Wild is more than just a romantic sounding title. The wilderness is key to both stories — as something being destroyed in Willough’s world, as something profoundly special in Marcy’s:

Marcy leaned forward and pounded Drew on the back. She pointed. “There!” she screamed over the noise of the water. The wind whipped the words from her mouth. He shook the spray from his eyes and nodded, fighting with the oars to guide the boat to the space between the rocks. They hit the channel. They seemed to be sucked by some great force toward the roaring unknown. They shot out of the channel, oars training, and raced to the rim of the raging falls. The boat shuddered, paused, then plunged. For a moment they seemed to hang suspended. Drew let out a whoop of joy. They hit the seething water with a great splash; then Drew clutched at the oars and rowed them into the calm shallows.

Breathing hard, he turned around in his seat and smiled at Marcy. His eyes were shining with excitement. “My God!” he exclaimed. He wiped his wet shirt across his wet face and laughed… Leaning forward, he kissed her tenderly on the mouth. “I wouldn’t have shared it with anyone but you, Marce.”

— How well the painful elements of the story serve Marcy and Willough’s personal journeys. Both of them come a long way, tempered into strong, self-knowledgeable women by what they’ve had to endure.

— How relevant the book still is. Though of course the mores of its setting are very different, themes of concern about the despoiling of nature still strike a chord, as do issues of women struggling to be taken seriously, and being trained to be frightened of their own sexuality. Of all the potential older romances to bring back, this one was a terrific choice.

It all adds up to an enthusiastic B+ from me. I just hope the long time bodice-ripper aficionados won’t sneer at my naivete now.