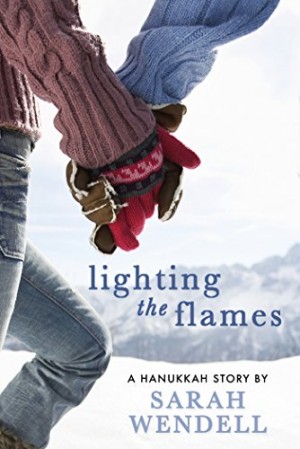 “The one with the blonde hair” is how my oldest friend describes me to her friends, who still wonder who she is talking about. That’s because I am no longer blonde—my hair went dark in college and now going gray more than anything else. But as a kid the blonde hair was kind of my calling card, and so to the people who have known me longest, the description remains.

Why tell you this? Because Sarah Wendell of Smart Bitches has written a lovely romance about that point in two people’s lives, when they each realize that the other has grown up and is “no longer blonde.”

I am Jewish so my interest is always piqued when Jews are featured in romances. I was excited to read that Wendell had self-published a Hanukkah novella. I like the Smart Bitches web site (disclosure: I have written a couple of guest reviews, and have had occasional offline email discussions with her). But I was also a little nervous on her behalf, since she did what I have thought about many times—taking that first step and writing a romance. I assumed it would be readable, since she’s a pro and knows the value of editors. But, would I like the style? Would I like the story? Would I believe the world she created?

The answers are two resounding yesses, and one comme ci, comme ça.

Genevieve and Jeremy have been the best of summer sleepaway camp buddies as campers and then as counselors, but they never moved beyond being summer friends. Now out of college (implied) and starting careers, they both are facing the realization that things are changing and returning to camp every summer may no longer be an option. The story is mostly set during an experimental week of winter camp that coincides with Hanukkah. The camp director aims to impress the board of directors and to extend the family feel for summer campers and their parents.

The story centers on how people mature emotionally: who we are as adults versus who we were as children, the camp person versus who one is the rest of the year, and the family created by camp versus the one we are born into.

At the start of the story, Genevieve and Jeremy have not seen each other in more than a year. Each has gone through major life changes: Genevieve lost her parents in an accident and Jeremy settled into a somewhat unexpected career given his apparently goofy, “try anything for fun” camp personality. Wendell portrays this all in a pretty subtle way early in the story, as the two notice that each has really become an adult physically, with a man’s beard for Jeremy and a more mature presence for Genevieve.

Genevieve is rebuilding her life after that great loss, and is reconnecting with her camp family, the only “home” she has left. Jeremy is wrestling with his role within his family and working hard to reconcile that role with who he truly is as an adult.

Jeremy and Genevieve initially revert to their camp personalities, but eventually their increasing maturity asserts itself. The emotional tension between the two ratchets up in a believable way, as they start to share their stories of the last year. Having related to each other as pals for so long, when Genevieve and Jeremy each finally realize that the other shares the attraction they each feel, it rang true. I also loved that the physical attraction did not require “tab A into slot B.” Closed door romances do not get the credit they deserve, and sometimes it seems like many writers have an “eat her, screw her, repeat” thing going on and the sex gets dreary.

The dialog is crisp and funny, and accurately reflects a long friendship. The other characters—camp director, camp cook, board members—never come off as cardboard, reacting to situations as real people might.

There were some issues for me, related to world building. The story is set in 2014, with winter camp centering on Hanukkah, which started on December 16 this year. I found it hard to buy into the idea that families would pull their kids from school a week before the holiday break to go to winter camp.

The larger timeline confused me. I thought that Jeremy and Genevieve had both taken a year off from camp but at times the book referred to “last year” when recalling the last time they had been at camp together. Their age was a little confusing as well—Genevieve’s career choice meant she had graduated from college (as did Jeremy’s) but they both seemed a little old to still be working at summer camp.

By far the biggest issue for me was that Jeremy and Genevieve never saw each other outside of camp. I went to sleepaway camp as a camper and counselor, and we saw our camp friends who lived in nearby towns regularly, and wrote to and called the ones who lived far away. As we got older and were able to travel independently we set up occasional visits and out of camp reunions.

I found it really hard to buy into the idea that they had no contact with each other outside of camp especially since they are Jewish (always a minority in any US town) and live in the same community. It’s this last point in particular that I has trouble with, since they should have encountered each other in school, or at larger town events or in their mutual circle of Jewish friends.

Overall Wendell has the feelings right: the bond of attending camp, the anticipation of seeing your camp friends again after a year, the comfort of a familiar place and its rituals, and the wistful feeling for a place that seems to stay the same as you move on in life. And most of all, she gets how two good friends learn to look at each other as adults and then realize they are in love.

Grade A-/B+ (I hate grading the good ones—so much easier to grade something one does not like).

Always an avid reader, Susan discovered romances long ago in summer camp when her tent mate let her borrow the Rosemary Rogers and Kathleen Woodiwiss books she brought. Her down-the-hall neighbor in college introduced her to the world of Harlequin Presents, and she devoured every billionaire sheik and Greek she could get her hands on. Right now she reads mostly contemporaries of all flavors (except motorcycle gangs) and historicals, with occasional detours into paranormal and steampunk. When not reading romance she reads mysteries and the newspaper, in print.

Previous article: Daily Deals: Books you should buy even if you don’t plan on reading them right away
Next Post: Daily Deals: An interesting pilgrimage, a couple of author focused box sets, and a historical marriage of convenience