REVIEW: Lean on Me by HelenKay Dimon

Your Harlequin Intrigue books are autobuys for me, so when I saw that you had a straight contemporary romance coming out I snagged it right away without paying attention to what it was about. When I discovered one of the main characters was a professional climber, I was even happier, especially when it turned out that the climber was the heroine. I’ve grown up around serious climbers and I can’t remember a romance novel that featured one. Lean on Me is a straightforward contemporary romance about two relatively ordinary people who reconnect, fall in love, and figure out a way to get past their individual and joint issues to arrive at an HEA. If that flat description sounds boring, blame the reviewer, because the book is anything but. 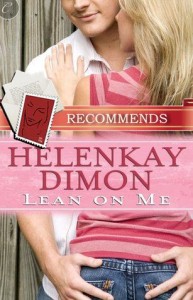 Cassidy Clarke returns to her hometown of Holloway, West Virginia because she can’t think of anywhere else to go. Her climbing career is all but over and her manager embezzled her funds when she wasn’t looking. She’s not crazy about returning, not least because the entire town turned on her when she made some ill-advised comments about Holloway during a post-summit interview from Mount Everest. Broke and worried about her stepfather, Cassidy shows up to find he won’t let her into the house. Without funds to rent even a hotel room, she pitches her tent at the edge of the Thomas Nurseries property, which is owned by the Thomas brothers and managed by her high-school crush, Mitch Anders. Mitch was the high school quarterback and went to college on an athletic scholarship, but he blew his knee out and returned to Holloway for good.

Of course, Mitch soon discovers that Cassidy is squatting on their land (although she won’t tell him why) and when he realizes she won’t or can’t stay at the town’s inn or at her home, he insists that she stay with him. It turns out that Mitch was interested in Cassidy in school, but she had no idea and assumed he was joking when he asked her on a date. She reluctantly accepts his offer while she tries to figure out why her stepfather, who has always been loving and dependable, is suddenly driving her away; after her mother’s death from cancer they are all each other has left. Cassidy is also forced to talk to townspeople, most of whom are still angry and resentful about the things she said and insist on referring to her as The Chosen One.

I liked Mitch a lot as a hero; he was decent, down-to-earth, and seriously hot. And I absolutely loved Cassidy. I wondered how she would fare as a romance heroine, because she embodies the climber personality of the inward-looking, detached loner. While the setup to lead her back to Mitch was a bit farfetched, I could easily believe that she was so consumed with climbing that she paid no attention to her finances, or that when she was flat broke with no place to stay, she pulled out her backpack and tent and made do.

Cassidy’s single-mindedness helped her realize her ambition to be a great climber, and she was a complete contrast to Mitch, who made peace with having his ambitions of a professional sports career derailed and settled down to a comfortable life in Holloway. They’re also a complete contrast in another important way, because Cassidy lives to climb and Mitch has an intense, unconquerable fear of heights. He wakes up to discover her cleaning out the gutters on his house:

“What the hell do you think you’re doing?”

She glanced down. As her gaze roamed over him, her smile faded. “You’re naked.”

“Uh, barely.” Her gaze bounced to Travis then back to Mitch. “Have you lost your mind? You’re turning pink.”

“I thought it was obvious, but I’m cleaning.” She waved the shovel at him as if to emphasize her point.

There was no need to even argue about this. They’d have a conversation when her feet hit the ground and the numbness left his extremities. “Get down.”

“You’ll kill yourself.” If he didn’t shake some sense into her first. The woman had no fear. She had no idea how close he was to grabbing her off the ladder.

“You do know she’s climbed Everest, right?” Travis stepped closer and put his hand in the air. “By the way, I don’t think we’ve formally met. I’m Travis. I work for Mitch, who looks like he might explode any minute.”

She leaned down and shook Travis’s hand but her attention never wavered from Mitch. “What the…why is your face that color? It’s purple now.”

His clothes and coloring were irrelevant, as was the headache booming in his brain and spreading out to his other body parts. One day he’d feel his toes again, but for now he wanted her down. “You should not be crawling around up there. You could fall or slide.”

Cassidy has to learn to trust Mitch and share her life with him, and it’s not because of a traumatic past so much as because her instincts are to rely only on herself. She lets him help her find out what the issue is with her stepfather, a first step to coming to terms with Holloway and a life that revolves around something other than climbing.

I found the pacing and the writing style to be really strong. The plot unfolds smoothly, and the scenes about serious issues are leavened with funny interludes. The small-town atmosphere was nicely textured; there were some dreadful people and some really decent ones. And as is usually the case with a HelenKay Dimon book, the sex scenes were hot and the dialogue sparkled. It’s a sweet story, but not in a saccharine or a closed-door sense. Rather, it’s sweet because it is about good but flawed people finding their way to a happy ending.

Lean on Me is the second book in a series, but I had no sense of missing out on the earlier installment. That said, I’m definitely going to read it and I look forward to the next book. Holloway isn’t an idealized small town like Mayberry, but it’s an equally enjoyable place to visit.