REVIEW: Lead Me On by Victoria Dahl 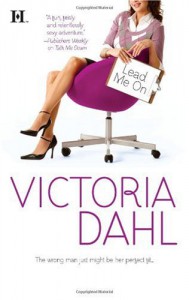 I’m probably not going to do this book justice in the review and I actually have some fear of turning people off the book based on what I am going to write. Robin and I talked about the book and she said it was brave and I agree. It’s brave because Jane, the heroine, is a complicated and messed up character that is both likeable and unlikeable afraid of her own sexuality and ashamed of her past. She is full of prejudice and bias and anger and shame and in order to achieve her happy ending, she has to overcome these things.

It’s often acceptable to read about the damaged hero finding redemption but I appreciate Jane’s road to acceptance just as much as an infamous rake redeemed story.

There is a memorable scene in the Princess Bride wherein Valerie, cries “Liar, Liar” and shakes her finger at Miracle Max for denying that Westley said “True Love” after Max extracts breath from Westley’s mostly dead body. Valerie says that ever since Miracle Max was fired by Prince Humperdink his confidence was shattered and he was afraid to perform any magic.

Jane is like Miracle Max only she never had any confidence. Jane’s mother was a prison groupie who moved from prison town to prison town latching on to various lifers. Jane’s biological father was a lifer who wrote to her from prison regularly until she was twelve. She had no male role model in her life and she thirsted for affection and approval from someone. After Jane suffered one rejection too many at a young age, with her newly blossoming body, Jane went out looking much older than she was to find the only kind of affection that she could from boys and men who never should have touched her.

She ran with a hard crowd and after allowing herself to be used one too many times, Jane had a wake up call and she changed her entire life. She dyed her hair, changed her name, moved away from her family, and suppressed every instinct that she had ever had and became, to the best of her ability, plain Jane. She works as the office manager in Quinn Jenning’s architectural firm. She is efficient, responsible, and very good at her job. She dates upwardly mobile professional men like lawyers, vetinarians, dentists. She is certainly not attracted to a man like William Chase with his beat up pickup, his tattoos, his big rough body, and his job as a excavation specialist, even if he does own his own company.

The truth is that a woman with confidence and self respect (as Jane would like to see herself) would not care whom she was seen with as long as she loved that man. But Jane lives under specter of hurt and shame. She has rebuilt but to a large extent it’s all a facade. Jane refers to herself as faking her way through each day. With Chase, she can let go and be herself but Jane isn’t even sure who she is anymore, only who she wants to be. What she doesn’t understand and has to come to grips with is that she needs to love and accept herself, all her flaws, her past mistakes, her weaknesses and her strengths because who she is is worth loving. And she’s strong. When you read about her past and how she recreated herself, you realize how strong of a person Jane really is.

As for Chase, he understands the embarassing past. He has one. He’s accepted his mistakes. He loves his alcoholic father while being saddened and angered by his father’s addiction. He’s in a good place in his life. The question, of course, is what attracts Chase to Jane who plays hot and cold, who tries to use Chase as a sexual object, who really is embarassed to be seen with Chase.

At first, Jane appeared to be an uptight secretary who might be interested in being messed up by a bad boy and then Chase realizes Jane is far more complicated. Something about her draws Chase and while he knows he’s being dicked around, he sees something worthwhile in Jane. Even more importantly, Chase knows that he can’t fix Jane, that she has to fix herself. And Jane, well, she can’t control everything:

Ending the kiss with a faint taste of her bottom lip, Chase framed her face in his hands so she’d have to meet his gaze. "I’m falling for you," he repeated.

He let her go. "You have no say in it. Sorry." Reaching past her, he opened the truck door. "Where to?"

"You want to go to your grandma’s house?"

She put her hand flat to his chest and pushed him. He took a step back so she’d feel some satisfaction. "Listen to me!"

"I’ll do whatever I want, Jane. I just thought you deserved fair warning."

What makes this such an easy read is though the subject matter might be weighty, the overall tone of the book is fairly light. Chase and Jane have great dialogue. There are very humorous moments interspersed throughout the book. One of my favorite is when Chase and Jane are at a biker bar and a bosomy redhead comes on to Chase while Jane is off talking to someone else, trying to get some information on her parole skipping brother.

Chase’s head jerked up so fast the room spun. Smack in the middle of that spinning was a tight bundle of angry Jane.

Her lips flattened into a thin line as she narrowed her eyes at the woman. "Would you please remove your hands from him?"

"I don’t think so, darlin’," the woman drawled, tightening her hold on Chase. He raised up his free arm to show his helplessness.

…
Jane drew in a deep breath, her nostrils flared, and he saw the flash of rage in her eyes as she went to the dark side. "Get your tits off him, you heifer!"

"Jane!" Chase coughed, a shocked laugh choking off his voice. But the woman finally let him go.
…
Arms crossed, Jane watched until she was at least ten feet away before turning her glare on Chase. "You want me to leave so you can get a closer look at those?"

"No!" He held his hands up in complete surrender. "I couldn’t get away from her."

"Funny, because you look awfully big and strong. Almost like a full-grown man."

Further, the story is very sexy and the sex scenes, while hot and explicit, actually mean something. They advance the story, the character arc, the romance. It’s not like you can skip these scenes because they aren’t just descriptions of sex but exhibits of the state of mind of the characters and where they are in the relationship. For Chase, he tries to show her she’s worth more than a quick lay and for Jane, it’s a release, but as Jane and Chase’s relationship matures, so does their interaction during sex.

It’s really beautiful to see Jane gain her courage and embrace her confidence at the end of the story.

So why the B+ grade? Jane and Chase were so carefully drawn and so were Jane’s family, her mother, her irresponsible brother, her stepdad, and even her grandmother. Yet, conflict was inserted toward the end with Jane’s ex boyfriend Greg in a hamfisted way. Greg’s actions lack organic motivation and his portrayal seemed obviously manipulative of the events at the end of the story.   Fortunately, the story does not end on this note.

This story has a lot of depth and I think it takes quite a bit of skill to write such a deep story with such a light hand. B+

P.S.   I still think we readers deserved one last sex scene with Chase and his shaved head.

in ebook format from eHarlequin.com

This book was provided to the reviewer by either the author or publisher. The reviewer did not pay for this book but received it free. The Harlequin Affiliate link earns us an affiliate fee if you purchase a book through the link.

→ Jane
Previous article: REVIEW: Wages of Sin by Alex Beecroft
Next Post: REVIEW: On the Edge by Ilona Andrews