I first heard of your debut fantasy novel, Last Song Before Night, when it was featured on the Tor blog. Among the things that caught my attention were its attractive cover and evocative title. Since you are an author I hadn’t read before, I requested the novel from the library. 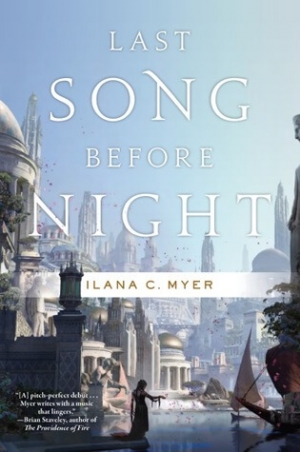 Last Song Before Night is set in Eivar, a land to which music is integral. Long ago, Eivar’s poets and seers could be male or female, and their songs had the power to cast enchantments. Then that magic disappeared, women were barred from songwriting, and the crown consolidated its power over the poets’ academy by limiting the kinds of songs that would be permitted.

As Last Song Before Night begins, Dane Beylint, a powerful merchant, admires the mask he plans to wear to the Midsummer Masque at the Court Poet’s residence, an event which is approaching. But Dane will never wear the mask there; moments later, he is brutally murdered.

Elsewhere, Lin, perhaps the only female poet in Eivar, awakens gasping from a nightmare. Even Lin’s songwriting partner, Leander, does not know Lin’s true identity. She is Lady Kimbralin Amaristoth, whose brother Rayen is now hunting her.

In the capital city of Tamryllin, wealthy merchant Master Gelvan’s daughter, Rianna Gelvan, is betrothed to Ned Alterra, a nobleman who has been her friend since childhood. But Ned is awkward and Rianna is drawn instead to Darien Aldemoor, a poet.

Darien and Rianna have been meeting in secret, but plan to marry after he and his songwriting partner, Marlen Humberleigh, win Eivar’s highest songwriting contest at the Midsummer Masque, which Lin and Leander also plan to compete in.

It is when Rianna sneaks Darien and Marlen into her father’s house that Marlen unearths Master Gelvan’s secret: the man practices the Galician faith, a faith that espouses a heretical belief in only one God, as opposed to the three sibling gods others in Eivar worship. Marlen likes to expose others’ secrets and flaws, but to reveal this particular secret could do significant harm.

All these characters, but for the dead Dane Beylint, are present at Master Gelvan’s ball. Lin and Leander receive an invitation to the ball from a mysterious poet, and at the ball, Lin discovers that man’s identity. He is Valanir Ocune, the greatest seer in Eivar.

At the ball, Valanir tells Lin that a plague known as the Red Death, once thought to be the stuff of legends, has returned to Eivar, and will not be defeated unless Eivar’s poets find a way to use their songs for enchantments again. There is said to have been a Path, one a Seer named Edrien Letrell once found, that connects Eivar with the otherworld from which enchantments come.

Then Valanir does something unthinkable – he begins to perform a forbidden, seditious song in front of the ball’s attendees. Court Poet Nickon Gerrard, a longtime rival of Valanir’s who holds sway over the king, has Valanir immediately arrested.

Valanir’s actions precipitate a crackdown on all poets, and make it impossible for Lin, a woman, to compete at the Midsummer Masque. Lin decides to leave town on her own, but after Master Gelvan offers her the opportunity to teach his daughter, she befriends Rianna and instructs her in the rudiments of knife throwing.

Meanwhile, Marlen has become involved with Marilla, a former prostitute who enjoys his propensity for pain play and cultivates his ambition to win the songwriting contest and become Nickon Gerard’s successor. Whether because of Marilla’s influence or whether because he seethes about his knowledge of Master Gelvan’s secret, Marlen betrays Darien’s trust.

In response, Darien gets drunk and has a vision, one that will change the course of his life and send him, along with Lin, on a quest to find Edrien Letrell’s Path.

Last Song Before Night is a novel that feels fresh, but also hearkens back to classic fantasy. As in Tolkien’s books, the characters are tested along their journey, and their experience of magic is both frightening and awe inducing. The book has also been compared to the work of Guy Gavriel Kay, which I have not read.

The novel is written in spare, controlled prose with lyrical turns of phrase. There is something gentle about this voice, even though the novel’s events take some dark turns.

The characters all have some complexity to them. No hero is without flaw, and no villain is entirely straightforward. I could see, with almost all of the characters, that had earlier events in their lives differed, their choices might have differed as well.

The major female characters are all interesting, and all three chafe at the roles assigned to them by their patriarchal society. Deep down Lin wants to be a poet, not an aristocratic lady. Marilla wants to be seen as more than a prostitute, and Rianna wants her father to trust her with the truth and empower her, not just protect her.

There is also a lot here for a reader who likes to read about romantic relationships, if that reader is open to surprises. Characters in this novel don’t necessarily end up paired with the same person one might initially suppose. At times I thought this book was rather like the quadrille, a square dance in which the partners change.

I would not advise reading this book as a fantasy romance, because not every romantic relationship resolves happily. Nonetheless, I enjoyed reading about each of them.

One turn of events late in the book had me shedding tears. The novel ends on a bittersweet note; the future looks hopeful, but that victory was hard won.

The novel’s setup takes a while, but the book absorbed me even in its first act. After that it became highly suspenseful and page-turning, so much so that I sometimes couldn’t keep myself from peeking ahead, something I usually try to avoid. The writing moves back and forth in time; often we learn that some event has happened, but it takes longer to find out how that event came about and what its ramifications will be.

I have only a couple of points of criticism to offer. At one point, a character from the deserts of Kahishi is described as having “swarthy” skin – a word I dislike intensely because it has negative associations. The character was otherwise positively portrayed, though.

Additionally, another character’s preference for pain play has an explanation rooted in childhood. While that backstory event rounded out the character and was good in that way, I didn’t think it needed to be tied to the character’s kinks, since there’s no evidence that that’s how kinks develop.

Otherwise, though, Last Song Before Night is a lovely novel. Although only 415 pages long, its storyline feels epic. Although two sequels set in a neighboring land are in the works, the novel’s central conflict is resolved by its last page, so it feels self-contained. The book has power, and I suspect that it will stick with me. B+.