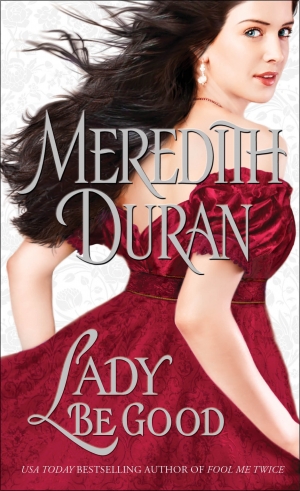 Though I approach basically all historicals these days with a good deal of trepidation, a new Meredith Duran book is still a thing to be anticipated. I gave your last book, Fool Me Twice  a high B+, and though I didn’t like the one before that as much, most of your previous books have gotten A or A- grades from me. So when I sat down with Lady Be Good, my hopes were high. Luckily, I was not disappointed.

The prologue set in London 1882 introduces Lily, a young thief who is about to be caught in the act of stealing for her thief-master uncle. She’s only doing the job for her older sister Fiona, who’s gravely ill and needs a doctor. When Lily manages to escape (not without injury), her uncle informs her that her sister has died.

Meanwhile, in India, our aristocratic soldier hero, Major Christian Stratton, is imprisoned by a madman. Bolkhov is a Russian general and megalomaniac who has lately been fighting the British; after the end of the war (what war? I was never quite clear, and my Wikipedia-fu failed me) he’s gone off on his own with his personal troops, devastating parts of India and Afghanistan. Under Bolkhov’s command the soldiers “slaughtered entire villages, framing the British for the atrocities.” (I didn’t love the “The Brits are the good guys and whoever the Brits are fighting are the bad guys” theme, all too omnipresent in historical romance. But whatever.)

Anyway, Bolkhov apparently acquired his own personal harem of native women during his depredations. He blames Christian for the deaths of his “wives” and children in an attack on his stronghold that Christian’s men had carried out. Bolkhov promises revenge by killing Christian’s family, then stabs him.

The action then shifts to four years later, in London. Christian is a celebrated war hero, and has ascended to the viscountcy after the accidental deaths of his father (he was thrown from a horse) and brother (he died in a fire). Except Christian knows that at least the demise of his brother was not an accident at all, but murder. Now he’s determined to save what’s left of his family – his mother and sister – from the crazed but cunning Bolkhov.

Christian’s path collides with Lily’s at Everleigh’s Auction House. Lily, now known as Lilah, is an “Everleigh Girl”, one of the young and attractive women the auction house employs to “flatter and cosset” clients. Christian is on the hunt for Bolkhov there, and to Lily’s misfortune he catches her in the act of stealing some letters from Peter Everleigh’s office. Christian resolves to use Lily in his quest. Catherine Everleigh, the icy brains of the Everleigh Auction House, has had contact with a mysterious Russian selling some antiques. Christian thinks/knows that Catherine’s contact is Bolkhov, and he’s determined to follow the trail to his enemy. To that end, he holds onto the letters Lily stole, insisting he’ll return them after she helps him spy on Catherine. He gives Lily the impression that he wishes to court Miss Everleigh and wants Lily to shadow her to aid in his courtship.

Lily has not made a habit of stealing since her sister’s death. She “went straight” and has been living both her and Fiona’s dreams of a respectable life, at least until her uncle threatened to expose her sordid past if she didn’t steal the letters in question. Now she has not one but two blackmailers, and in order to pay off the first she has to obey the second.

The action moves to a old country house that Christian has inherited from a deceased relative. He’s maneuvered it so that Catherine Everleigh, rather than her ne’er-do-well brother, will come to the estate to assess and prepare the contents of the house for auction. Naturally, Catherine, an unmarried woman, cannot go alone, so he further arranges it so that Lily is sent as a chaperone/assistant to Miss Everleigh.Though Lily’s understandably not happy about being blackmailed by Christian, he has inadvertently done her a favor- if she can learn from Catherine perhaps she can move up at the auction house and consequently, in the world. Unfortunately, Catherine Everleigh has a sharp and exacting personality, making Lily’s jobs (both her actual job and her spying mission) difficult.

Meanwhile, Lily and Christian are drawn to each other, in spite of their reasons for enmity (well, her reasons; he doesn’t have much reason to dislike her, except that as far as he knows she’s a thief). For all of their differences, both have lost their older sibling and in some ways feel like they are living their lives in place of that dead sibling. Christian has no desire to be a viscount; it was Fiona’s dream to be an Everleigh girl while Lily was training as a typist.

There’s nothing particularly fresh in the plot of Lady Be Good. (Is it strange that in romance “aristocrat blackmails gutter rat in effort to bring down madman” is a plot that’s been done before, many times?) The book’s strength, as is so often the case, is in the execution. Through strong prose and characterization, Christian and Lily come alive as more than stereotypes.

Sure, he’s ruthless, but Christian’s also deeply conflicted. He feels like he’s playing a role – “the Hero of Bekhole” to an adoring British public, but it’s not really him. He was once the carefree younger brother, then the disciplined military man, but neither of those definitions fit him anymore. As for Lily, she’s tried very hard to shake off her past, but not without regret. Her manipulative uncle and other family and friends from the London underworld make her feel guilty for wanting to be something different, someone more respectable. And she can never quite lose the fear that it’ll all come crashing down and the truth will come out.

The relationship between Christian and Lily develops slowly and naturally – from intrigue and attraction to respect and liking and then to love. There were times where I wished the characters had surprised me more – for instance, it would have been nice if Christian had accepted the help Lily offered late in the book. But I suppose his behavior was in keeping with both the time and the sort of man he was.

Another minor niggle: Bolkhov was both over-the-top and underdeveloped as a character. He is a menacing background presence for much of the book, but the actually confrontation with him was rather anti-climatic.

My grade for Lady Be Good is a B+. Meanwhile, I’m eager to start the sequel, Luck Be a Lady, which appears to pair Nick O’Shea with Catherine Everleigh. I’ll be interested to see how Duran manages to redeem him (Catherine is kind of a piece of work too but she softens considerably in this book). It should be fun!