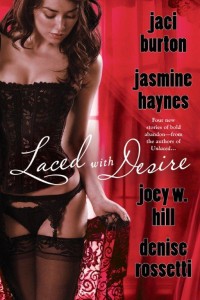 No Strings Attached by Jaci Burton.

Ella Hicks is the CEO of Hicks Construction, a company she built with her husband James, and took the helm when he died five years ago. She’s made a success of her company, and leaned on a particular friend and sometimes rival, Clay Mansfield, for business advice. Ella has spent so much time making Hicks Construction a powerhouse that her sex life went to the grave with her husband. Huh…too morbid? This story definitely isn’t. Ella realizes that she needs to do something to get herself out of this anti-social and anti-sex rut, especially since she’s been spending more time eyeing Clay’s ass than worrying about building codes. She schedules a vacation in an exotic locale, hoping to find rest, relaxation, and an anonymous partner for some meaningless, yet satisfying sex. Not exactly the smartest thing for a woman to be alone and on the prowl, and this is where Clay comes in.

Clay Mansfield has realized that Ella is more than his good friend’s widow. Sure, Clay deludes himself into thinking he’s going on vacation in the same spot as Ella just to make sure she doesn’t get herself into trouble, but that thought lasts half a second, or at least until he sees Ella at the pool:

Clay finally exhaled. It was Ella. Holy shit. She sure looked a lot  different in a bikini than she did in boots, jeans and a work shirt.

He almost felt guilty over the tightening of his cock.

Clay and Ella give each other what they need: a guiltless fling that goes deeper than just a zipless fuck (apologies to Erica Jong), providing them with a level of satisfaction that wouldn’t otherwise be reached. One of the caveats of this relationship is that it won’t go beyond the vacation; once they’re back in Oklahoma, it’s back to business as usual. Delightfully, it’s Clay that realizes there’s no “usual” much faster than Ella. The depth of characters and relationships was impressive for such a short story. I never felt that Ella and Clay’s interaction was forced, or that there was some sort of strange hook to make everything work. This was an enjoyable read. A-

I hate making a comparison, but in an anthology, I think it’s inevitable, especially when two straight erotic contemporaries are put one after the other. This story struck me as strange, with a dash of sad and dark thrown into the mix. Sophia, a former model currently working as a VP at Caprice, a high end cosmetics company, has a polyp on her uterus that needs to be removed and biopsied. Sophia has no close friends, no relatives and no one to turn to to discuss her fear that the polyp might be cancerous. Ford Connelly, the CEO of Caprice, knows that Sophia is off her game when she barely makes it through a presentation, and brings her into his office to confront her.

While I might be able to overlook a dark and slightly sad beginning, I couldn’t ignore that the characters crossed a major line when Ford essentially forced Sophia into telling him why she needed a day off. Ford and Sophia’s prior interactions had been purely on a business level, and I know it was important to have Sophia open up, but the way it was done stuck in my craw. From here, the story continues into uncomfortable territory. Ford asks Sophia if she could do anything at all, what would it be…and yep, it’s a MMF threesome. Ford has the hots for Sophia (it’s mutual) and wants to make this happen for her, so he sets it up for her the night before her surgery. Yeah, she’s gonna do two men before uterine surgery. In addition, guy number two was such an oddball; more of an acquaintance of Ford’s than a friend. This story was out of my comfort zone due to the awkward and contrived set up. D

I am, without a doubt, a huge Joey W. Hill fan. That said, I felt that Controlled Response, the contribution to the prior anthology, was tough to swallow for a variety of reasons. Honor Bound was the complete opposite, both a strong and erotic love story combined with a woman regaining her sense of self through finding love. We’re back with the Kensington & Associates gang, and this time it’s Peter’s story, the soldier who loves breasts for those of you that read the last anthology (I really need to get my hands on Matt Kensington’s story…). But in truth, this story is just as much about Dana as it is about Peter. Dana is a Sargent, about to be shipped out to Iraq, when she decides to spend her last night at The Zone, and upscale BDSM club that has appeared in many of Ms. Hill’s other stories. Peter is able to touch Dana on a deeper level than any other Dom before. And Dana is the submissive Peter has been searching for. Peter catches her in the airport as Dana is about to ship out, and she extracts a promise that Peter will write to her, but she isn’t going to write back.

Dana is injured in combat, and when Peter returns from Afghanistan he makes it his mission to get her to realize that she can’t give up on life, or on him, as a result of her injuries. Dana’s healing odyssey is great to read. Peter is her taskmaster, her rock and her friend – whatever she needs, while still being true to his Dom self. One of the things that I had a tough time with was the introduction of a secondary character dying of AIDS. I feel that Ms. Hill uses a desperate secondary character to highlight something special about either the hero or heroine in many of her stories, and this was a totally unnecessary detour in Honor Bound. The growth of Dana and Peter’s relationship was strong enough to hold it’s own. B+

I gotta be honest here: it’s very strange to read three contemporaries and have a paranormal thrown in there at the end. It actually took me about 15 pages to get into the story, but once I managed to get past my initial hesitation, this story was delightful. Captain Rhiomard made a brief appearance in the prior anthology, and I’m happy to see him get his own story, because after reading it, he really deserved it. Rhio is the Queen’s captain of the guard, and has been a warrior for a long time. Caracole’s Queen Sikhara is in negotiations with the Trinitarian Republic and their ambassador. The Trinitarians are slavemasters that take what they want by force, and Rhio is on the lookout for a trap, which he suspects is in the form of Dancer, the woman and warrior that is the evenings entertainment. Rhio is taken with her immediately, and realizes that he will have to win her trust.

"Where were you born?"

"What has that-‘?" Catching his eye, she broke off. "In the southern desert beyond the Trinitarian border."

"How long have you been a slave?"

Rhio glanced up from his notes in time to catch the shiver she couldn't prevent. "I ask you again, Dancer. Are you cold?"

She hesitated. "A little."

Without a word, he rose and went to light the  fire. Hell, she'd walked all the way from the royal chambers barefoot without a word  of complaint. He should have done it the moment they entered the building.

Rhio is patient, honest, and recognizes Amae for the warrior and strong soul she is. Amae respects and is attracted at the most visceral level to the warrior in Rhio. I freely admit that the initial scenes of this story weren’t a huge hook for me, but once I got into it, the story was a quick and very enjoyable read. B+

~Shuzluva
This book can be purchased at Amazon