Rugby player Spencer Bailey is determined to win a spot on England’s World Cup team. But with a month break before the selectors start watching him, he’s eager to have fun with a woman who knows the score: the relationship will end when rugby season begins. The lovely American Caitlyn Sweeney seems perfect for the role of temporary lover, since her visa will run out soon anyway.

Caitlyn works for an international disaster relief organization and can handle the world’s worst crises, but she flinches from her own. Her past has left her with a fear of intimacy so deep that she has trouble getting close to anyone—until she meets sexy Spencer. His hot body and easygoing nature are too much for even her to resist.

Neither Caitlyn nor Spencer expects to fall hard for each other. But with their relationship deadline approaching, the old rules of the game seem less important than before…until past secrets surface, challenging everything they thought they knew about each other.

These were some of the thoughts I had while enjoying “Knowing the Score.” “I’m floating through reading this. It’s awesome when I connect with characters and a plot. The book is almost reading itself.” Needless to say when I finished it, I knew it would be one of my recs for this month. 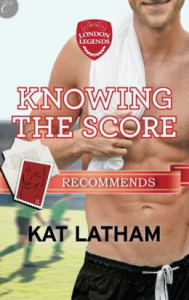 Knowing the Score by Kat Latham, recommended by Jayne

Why did I check this book out? The hero is a rugby player and I wanted to know more about the sport. Being an American basketball fan, all I knew of rugby was 1 – the New Zealand All Blacks, 2 – the 1995 Rugby World Cup game won by South Africa (I saw a great documentary on that game) and 3 – rugby players look hot. Now I know all kinds of stuff about player positions – ahem, naughty songs – also ahem, that the ball must be thrown backwards to be moved forwards and the players don’t wear athletic cups. Yikes. See? I’m learning.

But wait! There’s more. The book is funny and real and the dialogue is fantastic. I love the relationship between Spencer and his granddad. The laddish kidding sounds like what I’ve heard in British shows I’ve seen. Spencer’s grandmum also sounds like a woman I’d have loved to sit and talk with. And Caitlyn has an amazing job that actually helps do good in the world. I’m with Spencer in being in awe of her.

Caitlyn’s virginity situation may sound a bit extreme but when viewed in terms of confidence and self image, it seems believable. Her background hasn’t exactly built up her self esteem to begin with and as she says, as time goes on, her worry over it has just grown. The plotus coitus interruptus that occurs before Spencer and Caitlyn finally deal with that pesky condition of hers might have annoyed me in lesser authorial hands but here the lead up foreplay is hot enough that I didn’t mind as much. Certainly not as much as poor Spencer’s blue balls.

I want Spencer. I want to marry this man. We’ve had some reviews recently that mentioned heroes winning their heroines by treating them nicely and that fits here in spades. Not only is he patient and a sweetie, he’s sexy as hell. Spencer should be cloned and mass produced for export. Britain would have a trade surplus that would be the envy of the world. I mean really, a man who will carefully look after his sick-as-a-dog heroine, sees to her sexual needs before his own as well as mentally devising ways to pulverize the twat who hurt her in the past (not that he’s going to go out and waste time on the bastard but he does imagine how much the wanker deserves it) and who gives up what he gives up to be there for the birth of his child? Me wants.

When Caitlyn’s bemused question of Spencer – “do you come with subtitles?” appeared, I laughed out loud. The difference between US/UK English slang is hilarious. Note to self – never use the term “fanny” in England. Spencer’s whispered statement to Lily “That’s your mummy, but she’ll probably ask you to call her Mommy. You’ll notice she talks funny, but we love her anyway.” cracked me up too. But how did they work out the visa issue?, I still want to know.

It’s too bad that all the lovingly developed horrible issues that Caitlyn has are seemingly healed in an instant. It’s a lovely conceit that Spencer’s heartfelt assurances of Caitlyn’s “beauty in his eyes” and that he’ll never physically hurt her will be all that she needs for the mental scars of a lifetime to be wiped clean and banished from her mind but I’m afraid it takes a bit more than that regardless of Caitlyn’s nicely delineated inner strength.

But having said that, Spencer and Caitlyn do finally talk and get everything out in the open. All those nasty little secrets that we the readers knew all along would come out at the worst time do just that and the fall out is crushing but I do get the feeling that Caitlyn has finally opened herself totally to love and will trust Spencer forever. Do girls play rugby because I get the feeling that Lily is going to learn how to spin the egg at a very young age. B+

Kat emailed us and asked if we would be interested in tacking on a giveaway to our review. Why not, right?