I’ve been reading mysteries for about as long as I’ve been reading romance, but until I started reading m/m romance I’d never heard of the late Joseph Hansen’s Brandstetter series, or at least not that I remember. That tells you something, because I’ve read some pretty obscure mystery series and I have various anthologies and critiques of the genre on my shelves. Better late than never, though, because the Brandstetter mysteries are terrific. They’ve haven’t gone entirely out of print, but the paperbacks are expensive and/or hard to come by, and only the first two were even digitized (at similarly expensive prices and in a reader-unfriendly PDF format). However, Open Road Media acquired the ebook rights to subsequent installments, and when I saw #3, Troublemaker, on Netgalley I snapped it up. I thought it might be useful to provide an overview of the first three novels, since many readers are like me and prefer to read in order.

Dave Brandstetter wasn’t the first homosexual detective in the genre, but he may have been the first that was, as Hansen put it, “a decent man who happened to be gay.” Across the twelve novels, Brandstetter grieves for the loss of his longtime partner, finds a new lover, breaks up with him, and then begins a strong, committed relationship with a younger partner. These aren’t romances in the genre sense, because the relationship(s) are ongoing across novels and they don’t always end happily. But relationships of all types are at the core of Hansen’s stories as much as the mysteries are. Hansen’s debt to earlier writers from Dashiell Hammett to Raymond Chandler to Ross McDonald will be evident to genre readers, but these books are also original in their own ways, and not just because the narrator and many of the characters are gay. 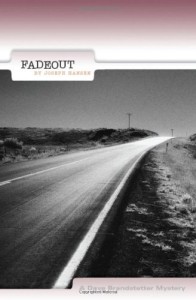 In Fadeout, we’re first introduced to Brandstetter when he investigates the apparent death of a radio show host and small-town celebrity, Fox Olson. Dave is not technically a detective but an investigator for an insurance company. But since the insurance company is a family business, and since insurance claims aren’t paid out under certain circumstances, he has a lot of scope for detective work. In this case Olson is presumed dead but his body hasn’t been found, and $50,000 is a lot of money in the late 1960s. Although Olson was popular and successful, his life wasn’t perfect: his wife was having an affair with his boss and his married daughter was living in a trailer with her financially unsuccessful husband, her alcoholic mother-in-law, and her husband’s severely disabled younger brother.

It’s a familiar cast of characters, but Hansen’s writing and characterizations make the story compelling, especially when he lets the reader see behind Brandstetter’s taciturn front, trying to come to grips with his loss:

They’d liked sharing detective stories—Arthur Crook, Nero Wolfe, Miss Marple, characters he wouldn’t read about again because they wouldn’t speak the same without Rod’s voice. He read well. If he hadn’t been so nelly he’d have made a fine actor. But it hadn’t been possible to school out of him all the femininity. Dave had tried. So had Rod. The affectations went, but what underlay them was ingrained. Real. Himself. Dave gave up trying after a while. Age took care of it to some extent. Death took care of it completely.

No. That was how he mustn’t think. Tears came hot into his eyes. He got up and walked the room. Remember something else. For God’s sake, forget about the dying. Remember the trip to Oak Canyon, the cabin in the woods, making love by the light of crackling pine logs, waking in the morning to see out the window the whole landscape snow-muffled, white, white. . . .

The excerpt reflects the time in which Fadeout was written; you certainly wouldn’t see “nelly” used to describe effeminate behavior today. I was able to read past that, but I can understand if not all readers are willing to.

By the end of the book, the mystery has been solved in an interesting, somewhat unexpected way, and Dave looks as if he might be able to move on and make a new life. Grade: A-

The second book, Death Claims, picks up a few months after Fadeout ends. Dave is now sharing his home with the man who was such a promising possibility in the former book, and at work he’s investigating a supposed suicide that doesn’t look quite right. John Oats had an apparently enviable life until he was badly burned in a fire, but he endured a long and painful recovery process with the help of a much younger girlfriend who was devoted to him, and he had a good relationship with his adult son who lived with them. The coroner ruled that it was death by drowning, but Oats had a head wound when he was found, and Oats had been talking to his lawyer about changes to his will. As Dave digs into Oats’s history, he finds links to old friends, a bitter ex-wife and the business partner she dominates, a major TV actor and his retinue, connections from Oats’s stay in hospital, and further twists via Peter, Oats’s son. The cast of characters is large, but Hansen juggles them deftly. The mystery takes a number of twists and turns before the final resolution. It was not at all what I was expecting but it was quite satisfying, and it tied up a seemingly trivial loose end from the first chapter. I love when that happens.

Meanwhile, on the personal front, Dave’s relationship with Doug is going through some pretty rocky patches because neither of them has entirely let go their previous relationships, and both are still mourning those losses whether they’re willing to admit it or not. We also see quite a bit of Dave’s friend, Madge, who was introduced in Fadeout; Madge is a skillfully drawn character who some of today’s m/m authors could learn a lot from. Grade: A- 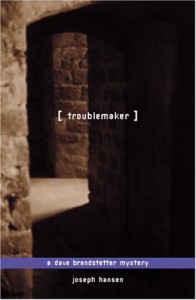 The third installment, Troublemaker, opens with Dave’s investigation of the killing of Richard Wendell. Wendell was apparently murdered by Larry Johns after Johns came home with Wendell one night. Wendell’s mother and beneficiary, Heather, is sure that Johns is guilty, and so are the cops who arrested him. But Dave is less sure, and his investigations lead him into the tangled web of people who surround Ted Owens, a respected architect who took Johns into the home Owens shares with his sister and niece. As Dave unravels the story behind Johns, Owens, and their respective histories and families, Wendell’s murder shares the stage with a complex story of family resentments, old relationships, and simple greed.

The story has a lot of twists and turns, and while it’s not quite as satisfying as the previous installment, the characters are equally well-drawn. Hansen rarely hits us oveor the head with what it was like to be gay, but instead lets his characters do the talking:

“The police don’t agree with you. Nor do I.”

“The police are busy. And you don’t like the boy. Those don’t impress me as sufficient reasons to lock him up for the rest of his life.”

She dug keys out of her bag and looked at him. “And your reason for defending him? Isn’t it the same as Tom’s? You’re another of those, aren’t you?”

“I try not to let it get in the way of my work,” Dave said. “Mrs. Ewing, Larry Johns was simply a catalyst. His phone call from your kitchen triggered a chain reaction that ended in a man’s death.” Dave pushed out of the booth and stood facing her. “If you’d told your brother what you’ve told me here today, it’s possible that man might still be alive.”

On the personal front, Dave and Doug have overcome their earlier issues but they haven’t really settled into a stable relationship, and the daily presence of a third party who hits on both Dave and Doug doesn’t help. Madge shows up in a brief but enjoyable and informative scene, and we get to spend a little time with Dave’s father, Carl.

Dave’s relationship with his father turns the usual stereotypes around, because Carl Brandstetter is a many-times-married heterosexual with a string of ex-wives to whom he makes alimony payments. By contrast, Dave is (mostly) serially monogamous, and it seems clear so far in the books that he in happiest when he is in a stable, long-term relationship. Carl isn’t overtly supportive of Dave’s lifestyle, but he cares about his son:

Carl Brandstetter said without looking up, “You plan to go free lance when I die, I hope. Because you know the board will fire you. And why.”

Dave shrugged. “I like the job,” he said. “But I feel about it the way you feel about your heart. I’m not ready to give up my sex life for it.”

Many of my favorite fictional detectives are excellent at their work and terrible at their lives. But Dave is that rarity, a decent, well-balanced man who is interesting. You root for him and care what happens to him, and you’re never bored in his company even though he’s neither talkative nor particularly emotive. But he unfailingly rewards your attention.

I want to reiterate that the novels are not romances; Dave’s relationship is anything but smooth, and the other romantic storylines are depressing rather than uplifting. But they are stories about relationships, good and bad. And for the most part, Dave’s relationships (with his friend Madge, with his father, with his cop friends and acquaintances) are good ones. You come away from the three books feeling that Dave has a handle on what it takes to make a good life, despite the difficulties gay men faced in that era. And I have it on good authority that his love life becomes more stable and rewarding as the series continues. I’ll keep you posted. Grade: B+

Note: The first two books of the series (published by the University of Wisconsin Press) have reportedly had some formatting issues in the transfer from pdf to epub and mobi formats. Troublemaker and the books that follow it, however, have been converted much more successfully by Open Road.