It is very hard to say that I enjoyed reading a book that is death-centric.   Saying that to someone, even if they are a reader, makes for some really strange responses.   Death celebrities are the main focus of the characters in John Belushi is Dead, but it manages to be a fun and quirky journey instead of being depressing, like death normally is.   Unusual in the best possible way, John Belushi is Dead is a great debut book. 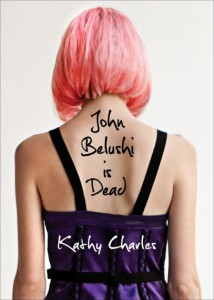 Benji and Hilda live in the vast city of L.A., where celebrities practically ooze out of the sidewalks.   A common practice for people that live in L.A., or visit, is to fawn over these celebrities.   Hilda and Benji fall into this group of people, yet there is one key difference between the two best friends and the rest of the paparazzi.   They are fascinated by dead celebrities.

Everything about a celebrity’s death intrigues the two of them.   How they died.   Where they died.   Who last saw them and spoke to them.   It’s like a wellspring of Hollywood macabre.   Hilda started her pursuit after her parents died in a car accident, and realized that a famous actress died in much the same way.   It felt safer, almost, to know that death was universal.   That death comes even to someone like a celebrity.

Their friendship, while strong, is as odd as their hobby.   Benji loves Hilda, but she just doesn’t reciprocate the feelings for him.   When she befriends an old man named Hank who helped them on a fact-finding trip (an outing where Benji gets memorabilia of the dead celebrities – such as a bloodstained tile), Benji’s jealousy starts up, and their friendship continues to grow in awkwardness.   That doesn’t even begin to describe what happens when Hilda actually starts liking someone that isn’t Benji.   Jake, to be precise, who is Hank’s neighbor and watches over him to some strange extent.

Hilda’s slow realization of what her relationship with Benji is really about is the center of this interesting debut novel.   John Belushi is Dead will appeal to readers looking for something original in the young adult market, or the book market in general.

If there is one type of book that I love, it’s a book with a protagonist that has a lot of depth to them.   I don’t just mean a depth like ‘Oh, they save kittens AND fight evil.’   I mean real depth.   The kind that makes you realize that humanity is complex and that people have layers.   Hilda is one of those protagonists.   You start off by writing her as the type of character that’s just plain weird and obsessive.   She’s not over-obsessive, but she has a quirk.   This has been done before.   It’s not secret that quirky characters are fun to read about, especially in young-adult literature.   But as you get deeper into the book, you realize how deeply her parent’s death affected her.   And the meaning of her preoccupation with dead celebrities. Hilda’s character is portrayed as stronger for her flaws.

What makes her great is that she doesn’t stop there.   Hilda doesn’t do all of this introspective thinking between events just for the fun of it.   There is a purpose in it.   Her greater understanding of how her obsession is unhealthy defines her character later on, and it still allows her to understand that it gave her some good lessons.   Hilda, despite being obsessed with dead celebrities, knows that death is not the answer to everything.   It is inevitable, yes, but still retains an air of the unknown.   Her knowledge is further expanded by Benji, who is by many means an unhealthy character.   Their tragic friendship is heartbreaking, and the many painful realizations that Hilda comes to have about Benji and his true personality are sickening, but effective.

This is the end of an early chapter, where Hilda begins to observe Benji more closely.   It sent so many shivers down my spine, and I still remember it, even after reading it weeks ago.

“So maybe having all this stuff in our houses is bad luck.”

“Hey, Hilda,” Benji said, turning back to his computer, “You should see this video.   It’s a girl getting screwed to death by a horse.”

I am the first to admit that my interests border on the macabre, but Benji’s obsessions were without boundaries.   I put the stones down and grabbed my bag.

“I’m out of here,” I said, and Benji waved to me halfheartedly.   As I walked to the door, I heard the sound of a girl moaning in ecstasy; then the moans became groans, and then screams.   I closed the bedroom door behind me, and smiled at Mrs. Connor on the way out.

However, as strongly depicted as this inverted friendship is, Hilda’s little romance wasn’t as much of a home-run for me.   While I liked Jake well enough, the mystery behind him was kind of lame.   More original than the cliche, but nothing that surprised me overall.   I enjoyed his background as the guy that fine tunes movie sex scenes, and I felt like he treated Hilda well, but I just didn’t think that this book necessarily needed a romance in it.   Hilda still manages to be a great, independent character, and she never puts Jake on a pedestal like other girls her age would do.   It just didn’t have the same affect on me.

Her friendship with Hank was stronger, and I thought it was a nice one, and I love how her relationships with others slowly affected her thin one with her aunt.   It’s a great novel in depicting character growth, and it really paid off at the end to see what kind of character Hilda became. Still, nothing really topped the insanity that was the Hilda/Benji friendship.

The plot was very character driven, so there wasn’t much propelling it forward from the outside, aside from Hilda pulling away from Benji and realizing the consequences and the positives of that.   It still managed to be fast paced and well done, and even readers that normally stay away from character-driven work will want to check this out because of the Hollywood knowledge and the complex characters.

John Belushi is Dead has some flaws in the romance and side characters, but is a powerfully done read with its quirks and the disturbing friendship between Hilda and Benji.   I found it to be creepy and fascinating, and it has me more than willing to try the next Kathy Charles read.   You’re one of a kind, Kathy Charles, and so is your book.   B +