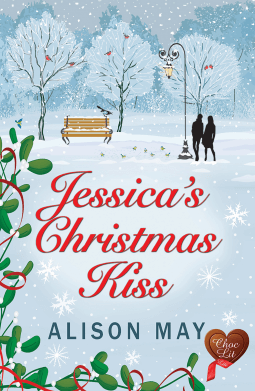 Real Christmas miracles only ever happen in the movies – don’t they?

When Jessica was fifteen, she shared the perfect kiss with a mystery boy at a Christmas party. It might have only lasted a moment, and the boy might have disappeared shortly afterwards but, to Jessica, it was just a little bit magic.

Fourteen years later, and Jessica is faced with a less than magical Christmas after uncovering her husband’s secret affair. And, whilst she wouldn’t admit it, she sometimes finds herself thinking about that perfect Christmas kiss, back when her life still seemed full of hope and possibility.

You do it every year. Manage to make me believe in a complete story in novella length. Manage to take two people having a lousy Christmas and turn things around for them. With this story, I think all the characters and threads from the whole arc are finished off but who knows, you could surprise me next year.
OMG and Fake Alan is back along with the other flatmates from Cora’s story. It’s all coming together now … and strangely it all makes sense and actually doesn’t feel contrived. I certainly got a deeper and more immediate understanding of all the backstories since I’d already read the first two novellas but I think newbies could pick up here and do alright.

The tale begins with a “15 years previously” prequel part one. When times were “better?” Well, certainly different. She was young and he was famous but incognito and the memories of the meeting bring back happier times of before now, before life has happened and disappointments have occurred and people you love have hurt you, before you have to wonder about everything instead of just accepting that it’s alright.

Usually the “kiss that I can’t forget” makes me roll my eyes enough I’m surprised I can’t see the back of my skull but even this makes sense that Lucas would remember given how his life went to shit afterwards. Kissing her was the last thing in his old life before it went to hell in a handcart. Oh yeah, he remembers. He also doesn’t believe in Fate anymore – the young Lucas would have but this one has been busted around a bit and has some scratches to show for it.

So both Jess and Lucas have shitty personal lives which are getting even worse at Christmas and for Boxing Day. Yeah, sometimes the holidays suck instead of Being of Good Cheer. I can feel the anxiety, pain, frustration and resignation they go through as family members put them through it. Jess and Lucas both think the world is their fault. They can give advice about other people and how to act and what to do but when it comes to themselves … they’re hyper ready to accept all the blame for what other people do and have done. Sometimes I do want to shake Jess a bit. I hate to admit that the words “wimp” and “pushover” darted through my mind once. Or twice. Still Lucas feels he can talk to her and tell her anything. Secrets he hasn’t told another soul, bits of his life he’s never let anyone else in on. They do trust each other and unconsciously turn towards the other to be there for them when they need a hand, or backup or just someone to listen.

Details come tumbling out on New Year’s Eve and with a little alcohol and a lot of “sorry for being sorry,” Jess decides to be bold. Things go perfectly. Just like chocolate sprinkles on whipped cream on hot chocolate. It’s almost too good to be true so of course it is.

So waiting for the shoe to drop, the penny to also drop, the light to come on, the truth to come out from where it’s been lurking since Part One of the book. When it does and the standard romance about face, usual overreacting occurs, this time I can believe and accept it better since Jess has a reason for being more than usually angry about it. She lays it out for Lucas too, right when she discovers the truth which he does tell her fairly soon after he realizes that he really, truly should have already done it. But the damage is done – or as Jess sees it – continued and when she hands him his marching orders, I’m not fuming in Plot Device frustration at it all. Jess has been hurt so badly by her snake ex-bastard – chronically and then with an extra dollop of right now – her reaction doesn’t seem so out of line.

However as the days pass and he doesn’t call and she doesn’t try to call him, time slips away until Part 3 when it’s time for the Christmas kissing guy, as her bestie’s husband calls Lucas, to enter her life a third time. Maybe. This time though, Jess is through feeling sorry for things that aren’t her fault. The latest pirouette of the sleaze bastard ex finally evokes the response she should have had for herself and I was cheering her on. Chuck ‘em, sister! It is the quiet ones to be wary of.

Both Jess and Lucas have had a year to ponder, think and finally accept that some things will never be what we want them to be while some things never were what we thought they were – and to find peace with that. They both tentatively allow small tendrils of hope to unfurl, to nerve themselves to reach out for what they’re now ready – emotionally – for. Jess’s anger at her ex was cathartic while Lucas finally confessing the burdens and secrets he’d held onto for 15 years was a like dropping a boulder he’d held up for so long.

Once they’re good to go with their dawning hope and head out into the London night, the resulting scene is, yes, straight out of a rom com Christmas movie.

She’d given up on romance and miracles. She stopped believing that she could have perfection, but, in the end, there was no point giving up on miracles, because the miracles didn’t care if you believed or not. They didn’t reward effort, or beauty. Miracles were miracles. Love was love and all you could do was hope, and when your miracle came to find you, you could grab on and never ever let go.

She smiled and raised her lips towards his to claim her perfect moment, with her perfectly imperfect man.

I finish reading the novella. I sigh with happiness and grin like a fool. Just as I do with the best Christmas movies. B+