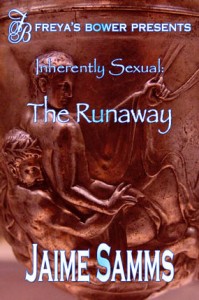 You’ve got five free short stories (up to 14K words) plus three interconnected mini-shorts on your website, and one recently published short at Freya’s Bower (and one other so far unrecoverable short on a defunct online magazine–if anyone can recover, I’ll love you forever). (Oh, and one more online magazine story that I wasn’t willing to read because it looked like it had an unhappy ending (from my obligatory quick skim) and considering the emotional punch of your other stories, I just wasn’t willing to read anything by you that didn’t have a happy ending.) So, six and a few bits stories. But that’s it. And that’s Just. Not. Enough. So please write more, more quickly, more expansively. Just more.

Thanks to Paul Bens’ recommendation of your published story “The Runaway,” I clicked through to your website and read the free short stories there. All in one sitting, unfortunately, because now there’s nothing left to read.

Reading all your available stories one right after another highlighted the recurring themes of love lost and recovered, lives changed and remade, and a dark, hot undercurrent of past violence and its effect on the present and the future. While all the stories are gay male romance, they are not explicit. Few of the couples even kiss and all sex is behind closed doors. In fact, I think the emotional power of stories would actually be diluted by sex–not something I often say, believe me. But this just speaks to the power of your writing.

“Dreamers” is one of your two longer shorts, if that isn’t too confusing. Ryan is a deeply closeted, lying-even-to-himself gay man who was a bouncer at a gay club at which Pete was beaten rather viciously. He moves in with Pete to take care of him and is still living with him–platonically, much to Pete’s dismay–five years later when the story starts with Ryan’s violent nightmares about Pete’s beating. It’s told from Pete’s first person perspective. While the narrative takes us through five years of their life and on a road trip to see Pete’s dying, homophobic father, the emotional heart of the story lies in Pete trying to figure out what he and Ryan might be feeling.

The writing in this story is brilliant. When I’m reading quickly, I usually skim anything that isn’t dialogue, because the meat of most romances is in the dialogue, the interaction between characters. The dialogue here is very…well, the only word I can think of is “male”: very telegraphic and truncated, with characters rarely saying what they mean or not even knowing themselves what they mean:

He clamped his jaw shut and the conversation ended.

The violence in this story takes a physical toll on Pete’s body, but it’s easy to see that the mental and emotional violence that Ryan is forcing himself through is much more destructive, much more painful than anything Pete has experienced. The ending is abrupt but heartfelt. I could wish for more examination of their relationship as it grows romantically and how Ryan handles it, but I also understand the need to stop where it does. (It reminds me a lot of Kinsale’s Seize the Fire, especially in the ending.) Grade:A-

“The Way Men Say I Love You” is introduced thusly: “Some things just don’t translate well from testosterone to English. In those cases, you just have to rely on body language and hope you get it right.” I think this is what intrigues me so much about your writing, because that’s exactly what you do. You write “conversations” between men who love each other that manages to convey not only the love, but also the emotional illiteracy that men sometimes suffer from. This is a great little story of a life-changing hour between two men that involves running away, a punch, and men acting like dumbasses. Grade: A-

“A Long Road Home” provides the long view of a successful relationship that the other stories refuse to show. But it’s a relationship that’s a long time coming, starting in high school but only consummated after middle-age. The two nameless characters struggle to find each other through the years and the death of their respective parents. So while there’s no violence in this story, death is inextricably entwined in the layers of this relationship in melancholy, but life-affirming ways. Grade: B+

“Statute of Limitations” looks at a long-term relationship as it yanks itself away from an ending of recriminations and miscommunication. It starts with Joe and Liam in college, beginning their relationship a few weeks after their first sexual encounter, in which Joe, ostensibly straight, forced his gay roommate Liam while both of them were high. It then jumps ten years later, to see Joe still beating himself up over their first time, Liam’s questionable consent. The ending is brilliant, managing to show the core of Liam’s vulnerability as well as Joe’s, even though it’s told entirely from Joe’s perspective, and managing to use the violence of the beginning of the relationship to the advantage of their reconciliation. A perfectly plotted story, full of hope wrapped around the underlying violence. Grade: A

The “A picture is worth 1000 words” Challenge are three mildly interconnected snapshots of love lost, found, and fought for. Smart, interesting, but very artsy, with a very canonical “creative writing” style.

“The Runaway” is your one published story and is actually less compelling than your free ones. Although well-written and thought-provoking, the characters aren’t still living in my head, as all your others are. There’s more explicit past violence, more family issues with homophobia, and it’s almost more heavy-handed, trying too hard to make a point, compared to the free stories. But it’s still totally worth the price of entry, but again, I wish it had gone a little further. Grade: B+

Your LiveJournal indicated that you won NaNoWriMo. Good. I can’t wait to read a novel by you. So, seriously, write more. And submit to Samhain–I can’t imagine that they wouldn’t snap you up in a heartbeat (although I’m obviously not an editor and I don’t speak for them).

Altogether, your writing gets an A- from me. The only problem is that the stories are never long enough. In fact, sometimes the problems they discuss are so deep and abiding that while one believes in the start of the beginning of the relationships you depict, the lack of exploration of the relationship as it grows and develops makes the ending seem even more truncated and threatens a belief in the success of the relationship. Your writing is so strong that there’s still satisfaction in the ending, but seeing, rather than believing, would be even more satisfying.