REVIEW: I’ve Got Your Number by Sophie Kinsella

I’m sitting here shaking my head at the fact that I’ve some how, some way managed to have not read any of your books. Up til now that is. And this one I read with no blurb to lure me or lead me on. Just your rep and the fact that – as mentioned in the first sentence – yours is a name missing on my “I’ve tried this author” list. After finishing “I’ve Got Your Number,” I agree with your publisher that I lost myself in the story and – throwing this bit in myself – didn’t want it to end. 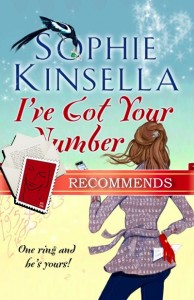 Poppy Wyatt is frantic. At a luncheon “do” with her bridesmaids and wedding planner, her family heirloom “worth a bloody fortune” engagement ring has gone missing. As she drives the hotel staff mental and sends out a flood of phone texts, her day is capped off when her phone is snatched out of her hand by a drive by thief. Staggering back inside the hotel, she notices a phone tossed in the rubbish bin – a perfectly good phone and once something is thrown away it’s fair game, right? Picking it up Poppy quickly transfers her life to it in the form of her contact list after which she sends out the number to everyone searching for her ring. When the man whose business PA the phone belong(s)(ed) – tense depends on whom you’re talking to – realizes Poppy has it, he wants it back – company property, you know. Poppy quickly spins a deal. She’ll keep the phone for a day until she can replace her own and in the meantime, she’ll forward any texts that are sent to Sam – the businessman – via his now defunct PA. Since Poppy scoots out of the hotel before Sam can do anything, he’s forced to go along.

As texts and phone calls start pouring in, and Poppy begins scrolling back to discover the origins of all these threads in Sam’s life, she can’t help but begin to become involved – it’s just the helpful – okay, slightly nosey – way she is. And honestly she’s doing him a favor to respond to the third or fourth requests some people have sent him. Can the man never answer these? Before long, Poppy thinks she knows as much about Sam as she does about herself. Or does she? Corporate hijinks, pre-wedding jitters and a ton of text messages later will Poppy be walking down the aisle towards the man she thought she would be?

When handed a Chick Lit book, I’ve realized my resistance is pretty much futile. It’s like leaving dark chocolate in front of me and thinking I’m not going to at least sample it. Ain’t gonna happen. Still, even though I’m helpless about starting to read one of them, the story and characters had better grab my attention and interest quickly. And I want something beyond the standard ditzy heroine in London with a crap job who makes a prat of herself.

Poppy’s lost engagement ring accounts for her hyperventilation state and neatly sets up the plot which, I’ll admit, has to be swallowed whole in order for the story to keep going. Sam is a very important businessman but it’s quickly revealed he’s also a nice guy as shown when he helps Poppy ace the intellectual Scrabble game she has to play with her brainiac future in-laws and fiance – via the phone of course. And, in a scene that had me busting out laughing, he helps her get a copy of The Ring made in order to buy her some more time before fessing up. I hope he eventually manages to redeem himself in the eyes of the jewelry store assistants.

Meanwhile, Poppy’s efforts on Sam’s behalf do cross the line a time or four but to her credit, from what she can see about it, she really does feel she’s helping Sam at his workplace. This is followed by Sam helping her build her self confidence as he reminds her that she’s just as important as her famous to-be in-laws and that she does great work at the job she loves helping make people feel better. There’s depth here and I can see both Sam and Poppy growing and becoming better because of the other. They work well together, talk to each other and laugh as well. They see the value in each other and help show that to others as hilariously depicted in the finale wedding fiasco. Those last 40 pages had me on the edge of my seat to see how it would get to where I knew it had to go while simultaneously laughing almost the whole way. No doubt about it, Poppy’s near wedding will be a viral sensation. Poor Reverend Fox will probably need a few swigs from a bottle of something potent to get over the shock. Not since the last wedding in “4 Weddings and a Funeral” have I laughed this hard.

It’s obviously taken me far too long to read one of your books but it’s something I’ve finally corrected. And you can bet that in the future I’ll be queuing up as soon as the new one is available. B+

→ Jayne
Previous article: February Recommend Reads
Next Post: An Example Why One Shouldn’t Learn From Fiction