REVIEW: In the Band by Jean Haus

I purchased this book sight unseen during an after Christmas sale on Amazon. It had quite a few positive reviews and something most band romances seem to neglect: a female actually in the band instead of just sleeping with someone in the band. At the sale price, it seemed like an interesting read, and I’m pleased to say that I enjoyed this book quite a bit, though there are a few caveats. 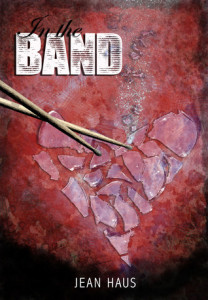 In the Band is the story of Riley, a girl who is talented at percussion, especially drums. She has a full scholarship to a college in Virginia, but turns it down at the last minute. Her mother has been in depression since her divorce and Riley’s eight year old sister Jamie will suffer if Riley goes away to college. Riley is upset about losing out on her dream, but recognizes that family must come first at this time. She enrolls in the local college and, at a friend’s encouragement, tries out for a popular local band, Luminescent Juliet, who needs a drummer.

It’s no spoiler to say that Riley makes the band; it’s in the title. However, her transition into the band isn’t smooth. Though she’s a talented drummer, she conflicts with Romeo, the band guitarist and driving force. He never wanted Riley in the band and continually attacks her actions while they perform or practice. He shares a calculus class with her and seems to take delight in needling her there as well. He’s described as a dark sexual god and extremely erotic. All of this makes Riley hate him for being an ‘ass’ but she begins to see a different side of Romeo away from the band meet-ups and wonders if there’s more to him.

The first chapter of this book came across as extremely disjointed and rough. It almost made me put the book aside immediately, however, I’m glad I chose to continue forward. Riley is a likeable character and is confident without being arrogant. She knows she’s a great drummer and never angsts about her skills. She has enough angst in all other areas of her life. There is her mother, who is sliding into depression, the lack of money now that her father has left them, the little sister she has to care for, the college she doesn’t want to be at, the dream she had to give up, and the animosity between her and Romeo. There’s also conflict between her best friends, and the father’s new girlfriend that’s years younger and easy to despise. I was expecting an easy read about a ‘rock chick’ and got a story about a drummer whose life is fraying at the seams. It made for a compelling and difficult to put down story.

The romance between Riley and Romeo is sweet but conflicted. There’s the initial bickering that gives way to more, and the sexual tension between the two of them is enjoyable. I did feel that the black moment and Riley’s martyrdom perhaps dragged on for a bit longer than I would have preferred, but Riley’s eventual turn-around convinced me. There is one section that could upset readers:

SPOILERS: [spoiler]at the end of the story, Riley temporarily gives up drumming because she doesn’t have the time in her life to juggle the band, her boyfriend, and her family. While this might come across as iffy to readers, I thought it was handled well and the epilogue eased my fears that she was giving up her dream for good.[/spoiler]

Overall an easy, pleasant, emotional read that I found difficult to put down. As self published books go, it’s mostly clean but with some typos and dropped commas, but not enough to lose me from the story. B+